B/X Dungeons & Dragons Month III: A Map of the River Kingdoms of Anansis

Here's the map....took a fairly crude sketch and doctored it up in Paint (basic, I know) but alas I am still too color shy to try and make it more than black and white: 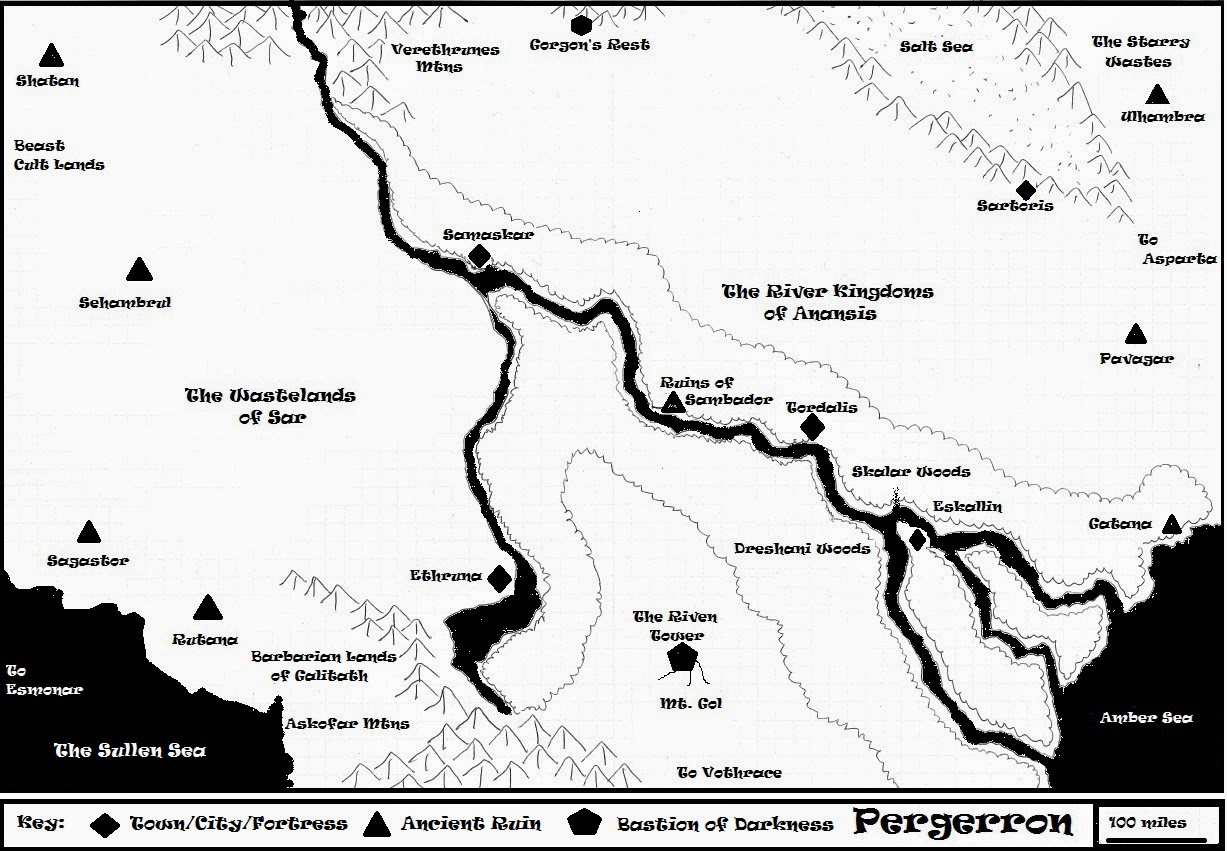 You can upload a copy here as well for easier printing/use.

This region of Pergerron focuses entirely on the River Kingdoms of Anansis, a fertile riverine cluster of city states centered in a vast sea of ancient and forgotten empires, relics from the old era when the primordials were cast down by the Enkannu, who destroyed the beast lords and chaos kin of old and made man the ruler of the world. This region of the world is roughly 1,000 miles across and covers a vast territory of desert wasteland with the wild, lush central forests surrounding the life-giving Anansis rivers.

In the region of Anansis there are three distinct "types" of locale to visit:

Towns, cities and fortresses: These bastions of civilization, recognized as diamonds on the map, are where mankind and his demihuman allies have clustered in safety as they struggle against the untamed wilds, the lost monsters of dozens of fallen cities and kingdoms, and the hideous cults of the primordials. On this map there are only a handful of notable cities, but there are dozens of smaller towns and villages clustered around each major point of civilization. Samaskar, Eskallin, Tordalis and Ethruna comprise the four bastions of civilization and together comprise the totality of the River Kingdoms. Apart from them and standing strong despite the many dangers of the Salt Sea is the dwarven empire of Sartoris to the north.

Ancient Ruins: there are dozens of ancient ruins across the region, especially in the westerlands known as the Wastelands of Sar and in the northeast in the Starry Wastes. The men of old lived and died by the sword and spell, and it shows; the ruins are inhospitable dominions and only monsters and subterranean beasts dare to inhabit this crumbling necropoli. Of all the ruins, only Gatana, along the coast, holds a semblance of life as the hutaakan Followers of Kord have worked hard in recent decades to found a new port along the once ruined coast, and now seek to reclaim the ruins from its denizens, which include the servants of Sibitsen Muukol.

Bastions of Darkness: These are "civilized" regions after a fashion, but are where the cults of the primordials, the intelligent beasts and chaoskin gather to engage in their own mockery of civlization while plotting to overthrow mankind, to sieze the precious life waters of the Rivers Anansis for their own. Gorgon's Rest towers over the valley below, ruled by the cruel demigoddess Abeitha, queen of the gorgons. Meanwhile, in the south there is the Riven Tower atop Mt. Gol, where the dark followers of Kalabar Drethos gather, seeking to plunder and destroy the caravans that would dare travel overland to Vothrace in the south.

There are other bastions beneath the earth, of course. Rumors that the Askofar Mountains are home to the orcish kingdom of Vosgathar, where Palagor Harad rules, are affirmed by the Galitath barbarians of those same mountains, who regularly fight with orc raiders. The Salt Sea is rumored to be the home to Astrea Vespis and her ophidian minions.

Each day one of these markers on the map will be discussed in great detail, enough so that a prospective DM will know what to do when the adventurers decide to wander on over. Up next: we'll start with Samaskar, the most powerful city-state of Anansis.