Part II of the Basic/Expert/RC Dungeons & Dragons Special for April: this is the second part of the introduction to the world of Pergerron, on which all subsequent entries this month will hang. You could use Pergerron for almost any edition of D&D at its core, but the intent here is to make this special to the unique flavor and allowances of classic B/X style D&D, with some RC edition enhancements thrown in. Now for the gods of Pergerron.... 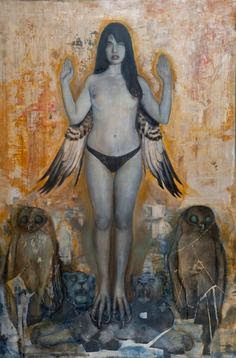 The Pantheon of the Enkanneth

There are many Enkanneth, which are formally described in the Sacred Codex of Enamoratu as the First Men of the world. There are two conflicting myth-tales about the origins of the First Men. One is that they were dwellers in the stars (said to have come from the planet Surdat, farthest and most peculiar o the sky-wanderers). A second tale that is less popular but embodies the Cult of the Risen Kings states that the First Men were an accident of creation, formed in error by the Primordials, destined to rise up and destroy their masters.

Regardless of the origin of the First Men, both sects agree that they rose to power, saw the Primordials for the formless and evil entities they were, and stole the divine secret of godhood from them. With this power they destroyed the primordials or drove them into the dark recesses of the world, and elevated their own people to the dominant kindred of the world over beast and monster alike.

The Temples of the Enkanneth can be found throughout the River Kingdoms, and you must journey to the remote lands of Asparta, Vothrace, Esmonar and Mesutin before finding significantly different deities and methods of worship. The people of the River Kingdoms tend to assume that these other foreign gods are just more Enkanneth, but worshipped in foreign lands…except, of course, when they see evidence of primordial worship. Such worship must be stamped out, destroyed, no matter the cost.
In the Kingdoms of Anansis there are nine prominent Enkanneth and several dozen lesser Enkanneth that are worshipped. The nine principle deities and associated spouses are:

Katas – The god of kings, said to have been the deity who led the charge against the Primordials, and to have slain its greatest leader, Sarpoxas.  His contribution to the land is the fabled Rule of Law, which is etched upon the sacred stones at the entrance to Katas’ temple in the capitol of Ulimpor.

Suliversa – the goddess of lore and wife to Katas, sometimes also seen as the mother of all men and women. Suliversa is the patron goddess of the Temple of Lorein Ulimpor and other cities, and is said to have taught mankind the principles of civilization.

Vornen – the god of sustenance and the hunt, who taught man how to craft spear and blade and bring down the beasts and monsters of the wild. He is also believed to be the god of the elves, having imparted to them his special gifts of sight and understanding, and that the elves disdain civilization as men see it to honor their creator. His wife is Medrea, who is regarded by the elves as a principle fertility goddess and given more import than her husband.

Sakhar – The god of metal, forges, and smiths. Sakuar is regarded as the progenitor of such lore, and it was with his teachings that mankind mastered the crafting of copper, brass and bronze implements and weapons. Sakhar is also regarded as the creator of dwarves, along with his wife Indraka.

Skuurn – The tamer of beasts and lord of shepherds. Skuurn sought to teach man how to tame the beasts of the wild, and also sought to make such beasts friendlier to humanity. Though he failed against those beings too monstrous, his contribution is normally regarded as pivotal to the mastery of pastoral living in civilized lands. Skuurn is regarded as the creator of boar-kin, centaurs and minotaurs though those races may dispute this as a “human thing.”

Velos – God of war, Velos is the patron of warriors everywhere. His aspect is battle and it is said he forged the armies which marched behind Katas against the forces of the primordials, smiting them all. Velos is said tohave once married Tartessa, the goddess of death, and it is from the souls of the dead that he harvests new warriors for his armies in the sky. Most commoners look to the sky and believe the stars reflect the campfires of the soldiers of Velos, standing fast against the primordials that lurk in the Darkness beyond the dome of the sky. Velos is also said to be married to Marnica, goddess of tranquility and beauty. The dichotomy is deliberate, and Marnica’s temples are just as prominent as those of Velos, and usually maintained by a dedicated crowd of priestess artisans.

Tokandros – Among the gods it is said that Tokandros is the mischief-maker, the one who betrayed them or will betray them, through whose actions the primordial will rise again. He is said to be half-brother to Katas, and that he is half-primordial, his mother being the terrifying dragon goddess Druusa herself. Tokandros as outcast god has been regarded as an important foil and reflection on the hubris of the other gods, while officially being the god of opposites; when Velos offers mercy, Tokandros will offer none. When Katas offers justice, Tokandros offers none. As such, he has officially become patron god to criminals and thieves in the land. His cult, which remains secretive, believes that Tokandros is married to his sister, Abeitha, the spiteful Queen of Gorgons who is one of the Ten.

Abia – The goddess of Light and destiny. Abia is said to have been the one that awoke the First Men to the realities of the Primordials, and showed Katas the secret gate to the power of divinity. Abia’s aspects are a dichotomy, being secret knowledge contrasted with blinding, inescapable light. Her cult is small but dedicated, and her priests are renowned as great seers and oracles. She is unmarried, though it is said that she still bore children in the form of the first rakasta and some other more enigmatic immortal races. There is a secret elvish cult that believes Abia is the true mother of the elves, though they decry the notion that she at some point lay with Sahambla and birthed the rakasta.

Tartessa – the powerful goddess of the dead, Tartessa is supreme ruler of Zhol’Dran, and the harvester of souls. Her designs are enigmatic, and she pays a toll in potent souls to her former husband, Velos. Tartessa is said to have a keen hatred for the living, and openly despises the other gods, biding her time until the primordials return so that she may reap the harvest of souls that such an apocalypse will entail. 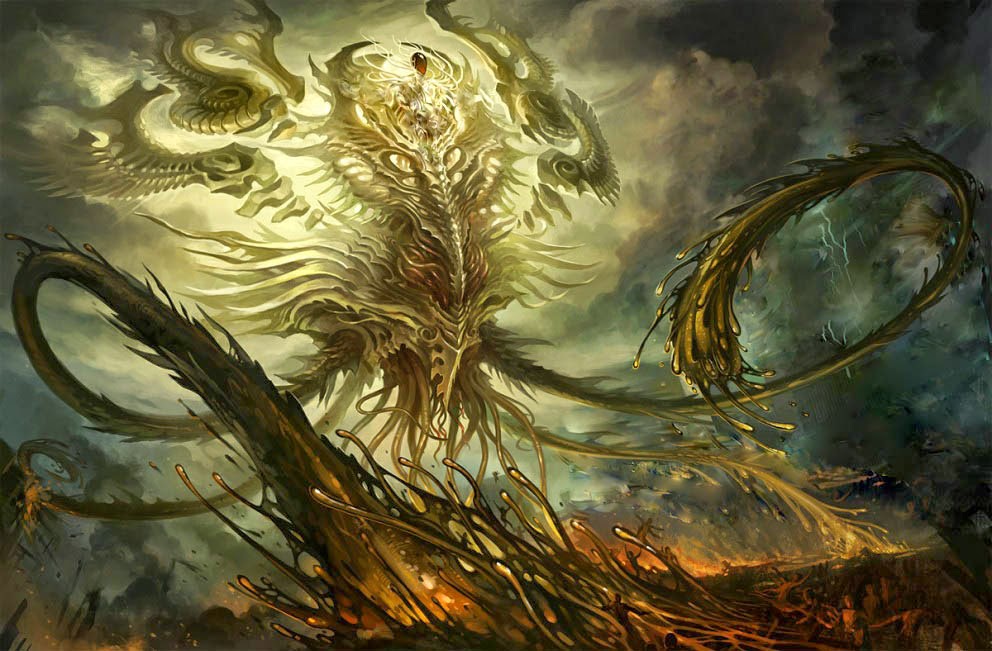 The ancient primordials are a mystery. A modern anthropologist might see this ancient pantheon as a fallen religion, trampled and absorbed by a younger usurper culture into their own myths, but the people of Pergerron know better, for the fabulous, mysterious and deadly ruins of the old era of the primordials dot the wilderness, tempting adventurers with treasure and doom. Old temples to these gods still abound, and the monsters of the world still seek to worship these lost gods. Even the current religion of the River Kingdoms acknowledges the power of the primordials, attributing the creation of the world and the elements to them.

There were ten great primordials and a host of unknown lesser primordials, but today all that exists to indicate their lost power outside of relics and ruins are the Servants of the Ten, a host of monstrous entities who claim to have been the last true children of the old gods, and who were destined to ascend to divinity before the Enkanneth stole the power away from them.

There is little known of the old primordials, but their names are recorded as:

Sarpoxas – the god of chaos and lord of primordial. Depicted as a great red dragon with seven heads in most old images.

Druunas – the queen of all dragons and creator of the night sky. Depicted as a many colored dragoness with five heads. Certain ancient texts call her “Tiamat” by her primordial name.

Verethax – lord of fire. Depicted as an infernal giant wreathed in flame.

Sambador – creator of earth. Depicted as a greath earthen mass made of soil, worm and bone.

Vos Kar – the primordial of air and wind. Depicted as a great tornado filled with gargoyles that form an immense humanoid shape.

Yoka Vataras – goddess of the quintessence of magic, depicted as a being of pure darkness.

Trigaril – goddess of the waters of creation. Depicted as a great leviathan of the sea who sometimes manifests as a beautiful woman to lure sailors to their doom.

Pulsagral – old god of the dead, the lord of Hazata. Depicted as a pulsing mass of undead flesh that shifts form constantly.

Hox Nagor – the god of the ophidians and serpents, depicted as an immense snake, larger than the river Anansis itself.

Sahambla  – the destroyer, the reaver of all. Depicted as a storm of blades with two burning eyes.

The Servants of the Ten
Each of the servants are a beastly incarnate of their kind, powerful beyond measure and very nearly immortal, or so the stories claim. These are paragons of their species and noteworthy for being the driving force behind the hatred of humanity by monstrous kind. Whether or not some of these beings are truly sons and daughters of the primordials as they claim is an unverified belief, but what matters in the end is that their monstrous followers believe it to be true. Some of them, such as Sekulos and Palagor Harad, are clear that they are either direct or spiritual successors, the latest in a long line of the Servants of the Ten, elected or chosen by a means unknown to hold their station.

Samadar Phorain – lord of the minotaurs, successor to Vos Kar

Skag – King of the manticores, successor to Verethrax