These rules have appeared before but I include them now for B/X D&D Month as well: 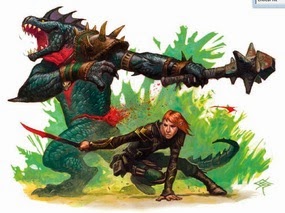 Critical Hits
I like critical hits. It's always amused me that the classic B/X edition of D&D didn't really address critical hits or fumbles, and that's probably the first thing back then most groups house-ruled in. My house rule for crits has always been fairly straight-forward: if you roll a natural 20, then you have made a critical hit. You are allowed to roll a second time. If you roll another 20, you have made an instant kill (unless the target is the sort who resists instant kills, in which case deal triple damage instead). NPCs and monsters may also do this.
If you make a critical hit, you multiply your dice and adds by two, so a 1d8 longsword swung by a fighter with +3 strength would get 2d8+6 damage.

Critical Fumbles
If you have one, you must have the other. A natural 1 means a possible disaster for the roller. Roll a Dexterity check, and if the character fails, he has fumbled horribly. This is usually a “DM call” of the moment, but you can also check this handy chart: