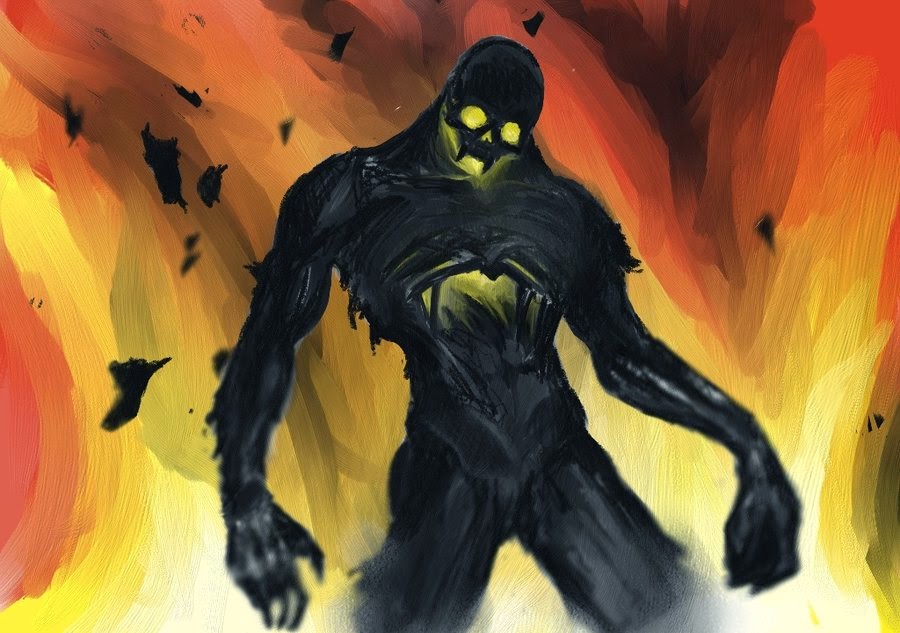 The burning men are among the worst sort of undead: not unlight wights, these cunning creatures are formed through an unholy combination of elemental fire and necromancy, imbuing the dead with evil intelligence and a perpetually burning body.

Because they are so destructive, necromancers who create burning men usually keep them in stony enclaves, held fast with thick wrought-iron gates or stone drops to insure they are not able to cause destruction until released. Burning men do occasionally escape...and some are even formed naturally, if the right combination of vile murderer put to death by fiery means intercedes with the right elements then a burning man can appear spontaneously. Such burning men, either escaped or natural, often cause great amounts of damage before disappearing, some believe consumed by their own fire, others believe pulled into the elemental plane of fire until a future time when they are once more released.

When in combat with a burning man they deal 1D6 additional fire damage with their claw and weapon attacks, and anyone who touches one will take the fire damage as well. A burning man can spontaneously explode as well; this explosion functions like a fireball centered on the undead, dealing 6D6 fire damage to everyone in a 20 foot radius around the burning man. Burning men are, themselves, immune to fire damage from all sources except when they explode; after the explosion there is nothing left of the immolated and detonated corpse.

Burning men are known to carry treasure left upon their person from their death, but flammable items are usually burned away and metallic items such as coins and weapons are usually dangerously hot to the touch (dealing the fire damage when wielded) until roughly 3D10 minutes after the burning man is destroyed, unless some other means of cooling is presented.