Thanks to Legion for inspiring this one! 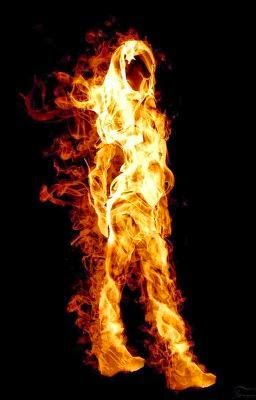 The fire nymphs are sultry fey who have been imbued with primordial elemental fire. Like their cousins the nymphs of the woods, fire nymphs are an innocent but inhuman and immortal race which exists in tandem with the natural manifestation of their element. In this case, of course...it is fire.

Fire nymphs are most likely to manifest in hot desert environments or near sources of geologic turmoil, where vulcanism is prevalent. They do not breath normal air so the toxic environment at the heart of a volcano...or in the bottom of the sea near a volcanic trench...each environment is equally comfortable to a fire nymph.

Fire nymphs do not suffer damage from water, but cold can harm them and they are vulnerable to cold attacks, taking double damage when struck. Fire nymphs likewise are immune to fire and heat damage. A fire nymph, when immersed in water, manifests as a more human-looking entity but the immediate water around her heats to a scalding boil and deals equivalent damage to anyone within five feet of her.

Like normal nymphs the mere sight of a fire nymph can be the death of mortal men. Any male human or demihuman who sets sight upon a fire nymph must make a save vs. paralysis or be struck dead on the spot. He will rise again 24 hours later as an undead burning man. Burning men created in this fashion are eternally loyal to the fire nymph who created them. A man who saves against the sight of the fire nymph is immune to this effect from that specific nymph forever more.

Fire nymphs can do two things when they touch mortal beings: they can burn them (1D6 fire damage) or they can render them immune to fire and heat damage for one hour.

Fire nymphs are flighty creatures, and when the source of their fiery interest evaporates or cools they will slip back into the border of the fey realm and the primordial fire, not to return until a new planar gate awakens due to another catastrophic geologic event or great fire of some sort calls to them.