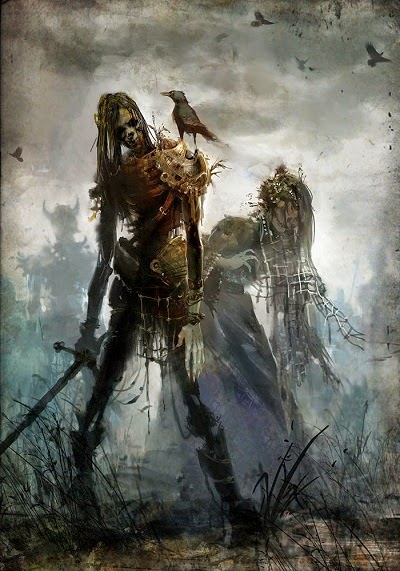 Reef skeletons are formed in aquatic dominions that have been affected profoundly by negative energy, leading to the revivification of the corpse after a prolonged exposure in the reefs. Necromancers have been known to find sunken corpses which have been preserved in the coral reefs and animate them, as well.

These rare undead are distinguished from other skeletons by a cunning intelligence and armored skeletal remains over which coral has grown like a thick armor. The reef skeletons gain a strong natural armor bonus as a result of this armored carapace. Most reef skeletons rely on their reinforced claws for attacks, but will arm themselves if the opportunity presents; in most cases their metal gear and weaponry corroded away to uselessness long ago.

Because most reef skeletons are formed from bones that rested for the decades or centuries necessary for the coral to cover their remains, they often have interesting baubles or items encrusted in their coral armor that can be carefully chiseled out.

An inventive armorsmith could take the coral-coated bones of a reef skeleton and craft a suit of armor from it. Such a suit would cost 1,500 gold to make, but be equivalent to a lighter suit of plate mail (AC 3, enc 250).
Posted by Doctor Futurity at 6:00 AM