I was shocked to discover two copies of Zweihander Revised sitting on the shelf at my local Barnes & Noble, truly something that I would ordinarily never expect --and with B&N being bought by a hedge fund that is putting a guy in charge on the record for wanting to cut down on the "hard to sell" books, unlikely to be a thing in the future, either.

Anyway, I'd only been acquainted with the POD version previously, so was shocked to see such a pleasant, high-quality bound tome, with ribbon, full color interior and incredibly nice design qualities for a paltry $65 so I grabbed a copy. You should look for a copy of this edition if you can, it's well worth it. I might plan to actually run a game soon, as the grim and perilous standards of Zweihander suit my gaming mood a lot more these days than the happy and heroic form of D&D 5E. This is also a good version of the game for fans of the system (like myself) from the old Warhammer 1E and 2E days who have never cared much for the Games Workshop Warhammer fantasy setting as such....liked the aesthetics if you will, but not the execution. 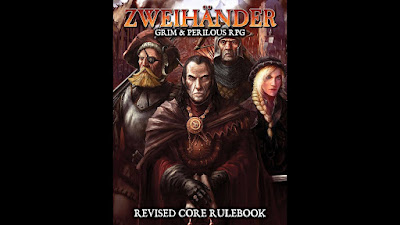 Posted by Doctor Futurity at 6:00 AM No comments:

Email ThisBlogThis!Share to TwitterShare to FacebookShare to Pinterest
Labels: zweihander 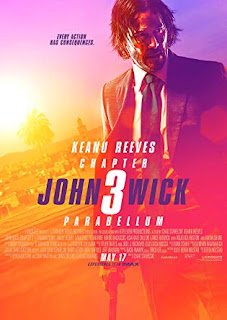 So yeah, this has been my favorite film of the year so far. A+++!
Posted by Doctor Futurity at 6:00 AM No comments: 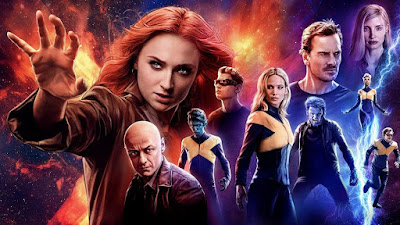 Dark Phoenix suffers for several reasons. The key problems this film faces include the following:

1. It's a sequel to X-Men Apocalypse, which was the weakest of the rebooted series so far, and as a result it continues with a bunch of characters that didn't get the best setup in the prior film to begin with.

2. It's a franchise that Marvel fans are convinced is imminently going to be rebooted into the Marvel Cinematic Universe by Disney. This probably will happen, but I will predict we won't see it for at least 5 or more years.

3. It's taking on the most infamous and well-remembers storyline from the old Byrne/Claremont days of the X-Men during it's heyday, a hard story to adapt to film without making serious concessions.

4. No Hugh Jackman, which means we could not have a squicky Wolverine/Jean Grey/Cyclops love triangle.

5. According to some sources, it was slated for a February release but as booted up due to a conflict with Battle Angel Alita. This shows; the film is a darker, broodier story that would suit a winter audience's sensibilities better....it was clearly not meant to be summer popcorn wahoo fare.

All of that aside, I actually really enjoyed Dark Phoenix and felt like, taken in itself, the film was a better follow-up to X-Men First Class and Days of Future Past (two films I greatly enjoyed), and that if it were possible to simply forget about the existence of Apocalypse then Dark Phoenix might have been even better.

Now, taken in and of itself, Dark Phoenix did a lot right. Chief among these were that it kept the run time to two hours, and as a result had a rather tight and a clean storyline. This despite what I understand were a lot of reshoots and edits, which apparently were meant to fix some glaring issues from test audiences and also maybe to tighten it up as an end to the four part X-Men run.

The actual story made me more empathetic to the Jean Grey character; the actress always struck me as more of a "Jean Grey cosplayer" but I am told she's actually well known from Game of Thrones (something I have never watched, ain't got that sort of time!) so whadda I know. Still, she managed to do a much better performance here than in Apocalypse.

The story also tried....as best it could....to incorporate some elements of the original Dark Phoenix saga in to it. There's the threat of the Phoenix Force as a world-eating malevolence. There's an alien race (not the Shi'ar, alas) who seek to bring it to justice or harness it, or something. Jean Grey's transformation from confused mutant to omnipotent power is underplayed but works well for me, and it probably helps that they establish early on that she was never really that ethical to begin with (the story delves into some early childhood trauma, mutant style).

Overall....I felt this was worth my time to see, and appreciated what they tried to do here with the final non-MCU version of the X-Men before some future reboot happens. The movie remains a victim of this Summer's film apocalypse, and perhaps rightly so, but I definitely had more fun with this than Godzilla KOTM or Hellboy. Solid B+

June has been the slowest blogging month for me in years, possibly since when I first started. Some of it has been time (limited), stress (copious) and interest (fluctuating all over the place). A lot of it has just boiled down to "I got other stuff going on."

Posted by Doctor Futurity at 10:14 AM No comments: