To mix up the medley of gazetteer entries, monster entries and magic item stuff I've done so far I am going to include occasional one-shot random encounter ideas. First up: The Mad Monk Astrahun, a crazed desert dervish with a deadly flock... 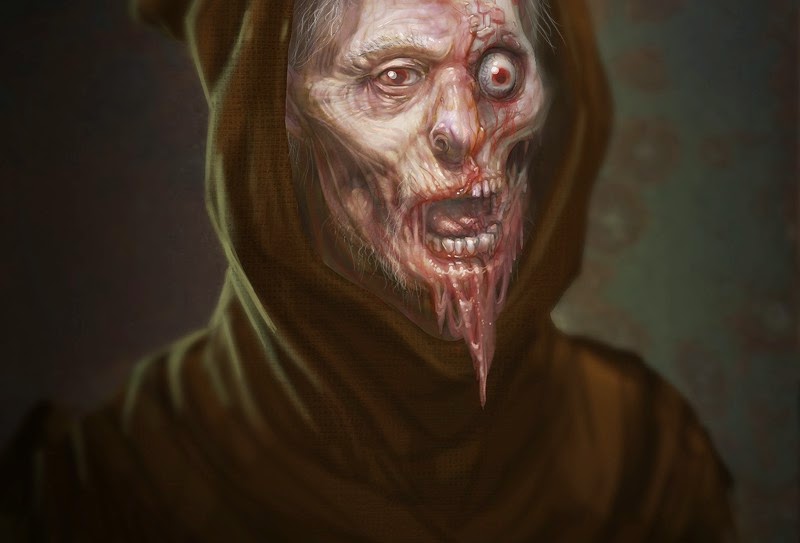 The mad monk was human, once. When Astrahun was a young servant of the enkanneth he wandered the streets of Samoskar preaching for the pious way and begging those who listened to seek forgiveness in the eyes of the Enkanneth for their failure to live up to the gifts the gods had stolen for man from the primordials. Astrahun was in his mid-twenties when he fell in with a rough crowd of flagellants who also partook of the seductively powerful and sometimes deadly hallucinogenic properties of the blue lotus, which grows along the length of the River Anansis. It was shortly after this that the monk began to hear the voices. It was these voices which commanded him to leave the safety of Samoskar, to begin a daring pilgrimage.

Astrahun traveled  nearly 600 miles with hsi enclave of lotus-addicted followers. He visited the ruined necropolis of Rutana, on a pilgrimage to follow the will of the sultry voice which bade him enter the wastelands of Sar, where he would receive true enlightenment. The story, as it goes, is that this spectral woman who would appear in dreams and whisper in his ear claimed to be the lost empress of the old empire of Sar, and Astrahun in his states of delusion would believe her, despite the fact that the oldest records of that time suggest Sar was ruled by a monstrous female gorgon called Euramiskas.

When Astrahun arrived in Rutana something terrible happened. His flock was destroyed or transformed and he gained a new flock as a result. He was scarred horribly, but gained a terrible new power that made him almost immortal. His eyes were opened to hidden truths within the ruins of Rutana, and now the voice commanded him toward a new direction: to wander the lands of Pergerron bringing the truth to its people.

Astrahun's flock has been visiting towns, villages and sometimes even cities for decades now. When they appear, assuming a large brawl does not ensue they will make themselves unwelcome guests as they proselytize while at the same time tearing up the town. His most benign cult followers are simple acolytes, while his more monstrous dedicates wait at the edge of civilization for the call to assault the place once the monk finds it unworthy of his preachings.

So who, then, does Astrahun preach of and pray to now? He calls her the Mistress of Queriaule, a mystical place said to be a dominion in the elemental Outworld where the Enkanneth and the Primordials struggled in their great war. Queriaule is mentioned on occasion as a great city of obelisks, in which rest the ghosts of all mages and witches who would seek magical knowledge and die unfulfilled in their quest. The Mistress of Queriaule is believed by those who have taken an interest in the monk to be one such vengeful spirit, perhaps a lich queen of some sort who for reasons unknown gains great benefit by sending the mad monk on his rampages.

Astrahun, the Mad Monk
Human Cleric level 11, Chaotic
ST 16 DX 12 CN 15 IN 14 WS 18 CH 18 (but -4 for appearance related checks)
HP 72, AC 6 (toughened skin)
Attacks: Heavy Mace+2 of confusion (1D8+3) plus special-anyone hit by Astrahun's mace or touch must make a save vs. spells or become subject to the effects of a Confusion Spell for 12 rounds
Spells Prepared:
1st Level: cause fear X2, cause light wounds, protection from good
2nd Level: hold person X2, know alignment, silence 15' radius
3rd Level: cause disease, speak with dead, striking
4th Level: animate dead X2, cause serious wonds
5th Level: insect plague X2
Special Trait: Astrahun has the touch of the Mistress of Queriaule upon him. Whenever he perishes he will regenerate 1D12 days later in the streets of the Outworld Necropolis of Queriaule, near the portal which opens in the heart of the ruins of Rutana.
Magic Items: heavy mace +2 of confusion, 2 potions of ethereality, 1 potion of undead control, ring of regeneration, ring of survival
XP Value: 3,875

Astrahun's flock consists of several unusual creatures, the number of which can vary at any given time:
4D12 cultists (Level 1 clerics)
3D4 acolytes (level 2 clerics)
1D6 elder monks (level 1D4+2 clerics)
Saragon the Thoul bodyguard - this hideous mixture of hobgoblin, ghoul and troll was one of the denizens of Rutana compelled by he Mistress of Queriaule to serve and protect Astrahun. He does so with a +2 flaming longsword  (a tougher than normal thoul with HP 56, RC pg. 210)
4D12 goblins (loyal camp followers)
4D6 hobgoblins (servants and soldiers serving under Saragon)
2D4 lesser thouls
1D6 bargda who are just mercenaries looking to raid and loot 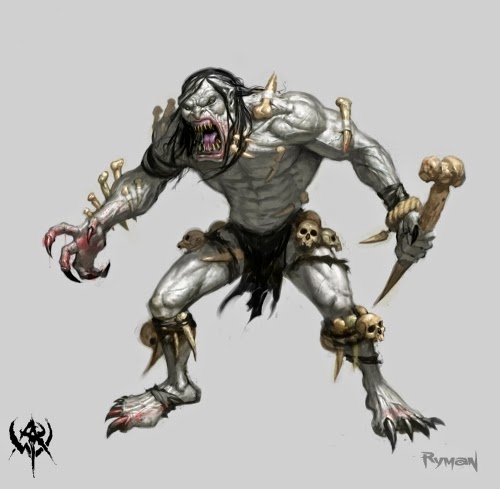 Astrahun is terrorizing the local village with his zealotry....the town is treating him with kid's gloves because they know his monstrous followers lurk nearby, but need someone to kick him out of town...

The PCs encounter him while roving the land with his followers; he takes a keen interest in converting them to the way of his dark mistress.

Astrahun recently suffered a setback, and he is encountered while alone and traveling across the Wastelands of Sar in an effort to rebuild his flock.

Astrahun gained a potent convert: the orcish warlord Faragosh of the Dreshani Woods. He suddenly has a loyal army at his command, and Eskallin and Tordalis are so close....ready for conversion by sword and fire!