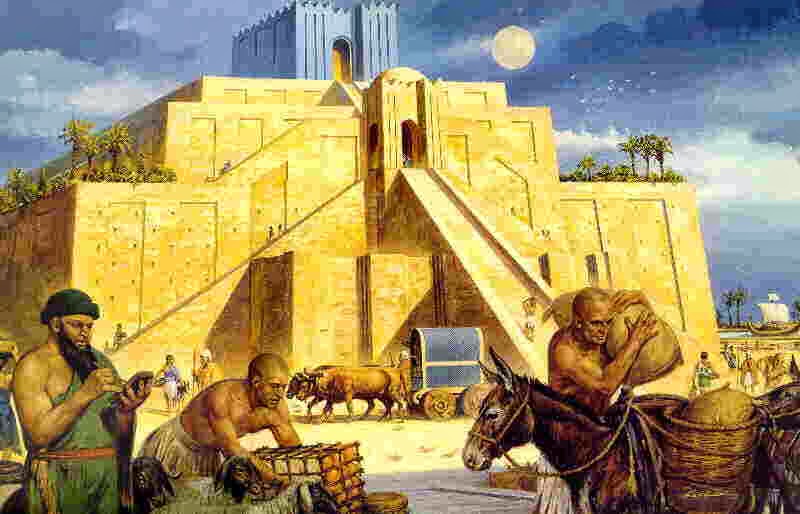 Samaskar is the glorious jewel of River Kingdoms of Anansis, greatest of the city-states that comprise the human occupied lands of the Great Rivers and center of rule for the strongest king in this time, Hatansis the Great.

Local Terrain: Samaskar is located in the northern Skalar Woods, a lush but troublesome expanse of wilderness that encroaches on man's territory faster than it can be slashed and burned. The lands around Samaskar city walls are cultivated farmland that relies on seasonal flooding from the Anansis River for irrigation. The area for miles along the coast is muddy and difficult to cross, the inland a mixture of cultivated land and rough sclerophyllous dry forest that stretches for a hundred miles in either direction of the river, growing greener and more vibrant closest to the riverfront.

Reaching Samaskar: carefully maintained dirt-and-stone roads wind along the upper slopes along the valley proper which descends down to the Anansis River, with one great road winding south to Tordalis, and another following the rive north into the mountains before ending abruptly at a location where it is said an even greater city of old once stood tall before being annihilated by primordial cultists of old.

The city itself stretches along this great slope into the shallow valley, with a large waterfront at which great, ancient stone piers stretch out into the immense river (Anansis River averages 10 miles in width at any given point), providing enough room for hundreds of riverboats and fishing trawlers to dock at any given time.

Local History: Samaskar is said to have been located at this ideal convergence of the western and eastern paths of the Anansis River more than a thousand years earlier, and before then it was still a place of habitation for farmers who found the rich soil to be ideal for farming. It's position of relative power along the river has made Samaskar the largest and most distinguished city of men, and the current ruler, Hatansis, is greatly valued for his tactical skills as well as his philosophical wisdom.

The Layout of Samaskar: Samaskar is a large city by the standards of the River Kingdoms, with enough folk in its walls to require daily replenishment by the many coastal farmers, fishermen and shepherds that ply their trade and seek to gain fortune through the sales of goods to the city. Anansis is divided into three tiers, and activities revolve within one of the three regions in the city walls:

First is the Lower Tier, where the harbor of the river is to be found, and most trade and commerce takes place. This is where adventurers are most likely to find goods both local and exotic for sale or wanted. Although Samaskar has no slums, the housing for the poor and indentured is situated in this tier.

Second is the Middle Tier, the city proper. Here most local citizens make their homes, and demonstrate the famous wealth and prosperity that Samaskar is known for. Private practices and professional merchants have their businesses in this tier, and you can also find many lesser temples to minor gods and spirits in this section. The city watch maintains a garrison at Fort Hadax, which is located on the south side of the tier, abutting with the lower tier (where they spend most of their time, anyway).

The third (royal) tier runs along the lip of the valley proper, and is where the palace and its great walls dominate over all below it. The elite nobility, the station of the royal guard, the palace of the king and the greatest concentration of wealth are found here. It is also the most heavily fortified portion of the city, and its eighty-foot tall exterior walls are legend among those tacticians who have studied Samaskar's royal tier.

Outside of the city walls is the so-called "fourth tier" of the city, where open markets, commoners seeking to trade local goods from homesteads, caravans arriving for a visit and performance events can be gound.

The Temple of Katas: This sacred temple is a ziggurat-shaped pyramid located at the height of the Third Tier, and it towers over the rest of the city, even the palace (if only by a hair's breadth) as is fitting for the god of kings. The priests of the temple will offer healing services to adventurers with the right coin and demonstrated reverence for Katas.

The Coliseum of Velos: Just east of the city along the southern road is the Coliseum of  Velos can be found, serving as both a gladiatorial arena of entertainment and a sacred temple to the god of war. Adventurers desperate for cash can sign up for the arenas and fight criminals, captured soldiers, monsters and other beasts for coin. The better the showmanship the more money one can make.

The Ziggurat of Tartessa: Located a mile north of the city, this Zigurrat is the largest monument to the dead, and marks the location of the city's ancient necropolis, a field of tombs, older lesser ziggurats and other monuments to forgotten kings and nobility. The necropolis is said to be protected by the vengeful phantoms of the dead who dwell in Tartessa's ziggurat. The necropolis itself is maintained by a dedicated but mysterious order of hutaakan priests who serve Tartessa and the will of the dead unwaveringly, and are willing to put their lives on the line to thwart grave robbers. 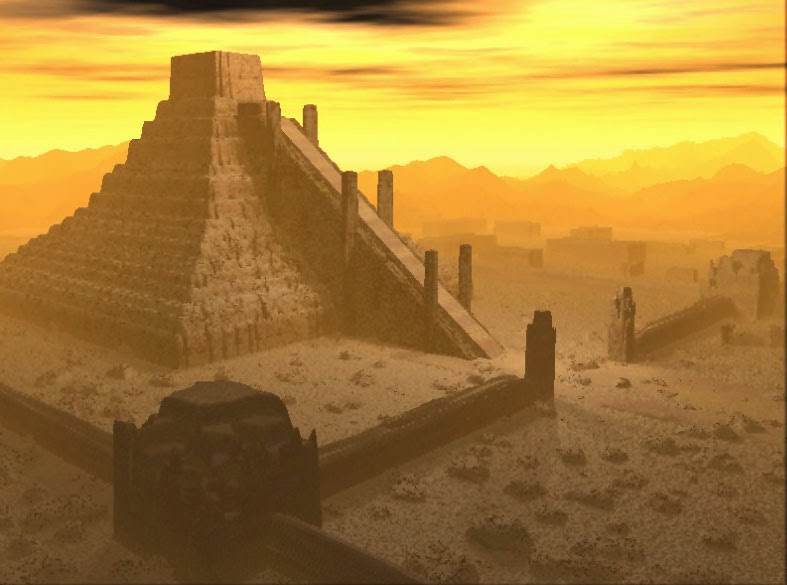 Encounters in and Around Samaskar:

Plot Seeds in the Region of Samaskar:

The Submerged Temple: There are stories that say if you sail across the river fork to the southern shore, there is evidence of an ancient ruin that sunk into the mud long ago. Some suspect it is the ruin of a primordial temple. Locals in the nearby fishing villages claim it is nothing more than an old ruined port, but last winter the river's waterline receded far enough that evidence of an amazing ancient pyramid jutting up from the earth was found, and adventurers from Skal's Raiders allegedly entered it, only to be almost entirely slaughtered by a horde of decapi led by brain collectors...

The Intrigue of  the Arenas: The arenas are run by a cruel nobleman named Hathor Fesk, who is sometimes accused of being of mixed blood, his father having tamed and married a Galitath woman from the west (though telling this to Hathor leads to a fight, invariably). Rumor has it that Hathor's supply of exotic beasts is running low and he will pay top coin for fresh creatures for the arenas, the more exotic the better. He's especially keen to find exotic subterranean beasts such as hook horrors and hulkers, which always play well to the crowd, but hulkers especially are difficult to keep in captivity. In fact he doesn't like to advertise the fact that he got a trio of infant hulkers that burrowed out and escaped into the old catacombs beneath the city proper. A group of adventurers who earned his trust might get an extra comission to hunt the beasts down. Lastly, there is rumor of a Feywing devouring sheep to the north. Hathor has no idea how to capture such a beast, but would pay a princely sum if it was accomplished (5,000 gold pieces, by his standard).

The Graveyard of Ships: Two centuries ago Samaskar went to war with old Sambador to the south. Once great sister nations, the old tale of war and revenge revolved around a brother and sister who grew resentful of one another, as the old King Damadis came to resent his sister Aspara, who married Sambador's king, then became queen herself shortly after he died under mysterous circumstances. Within a matter of years the rival siblings sought to destory the other, and a great conflict ensued. During the greatest of these battles Sambador's navy assaulted Samaskar's harbor, but King Damadis allegedly had communed with the vile specter Xamorthas of the ruins of Shatan, and the lich annihilated the entire fleet with necromantic magic. The rumor today is that the queen and her treasures were on one of the sunken ships, and divers try to find this....but that the graveyard of sunken vessels is plagued with watery undead. Typical encounters beneath the water are with aquatic zombies and skeletons, though stranger undead can be found. 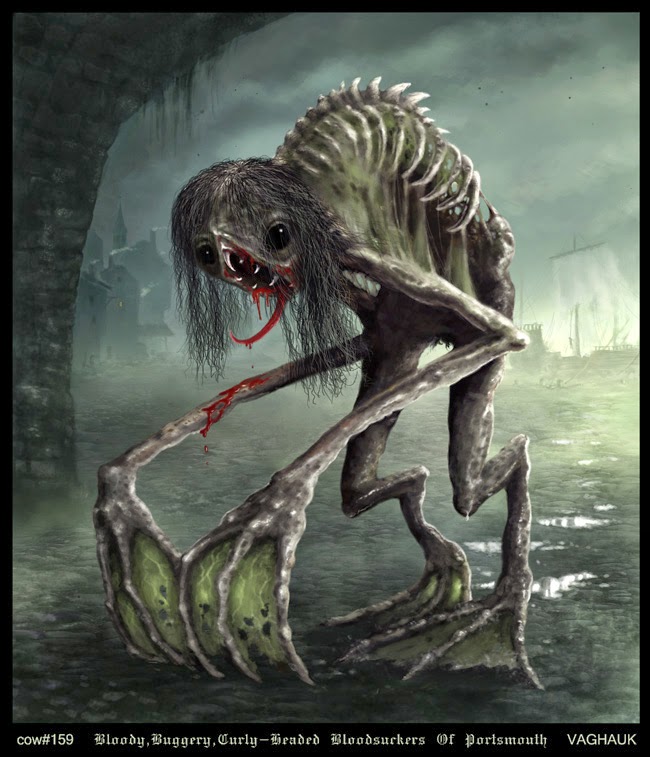