Today's Penny Arcade is poignantly true, I can attest: 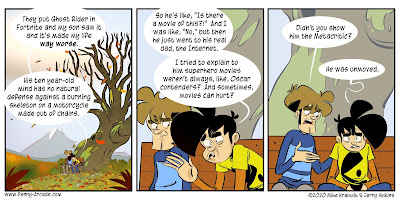 About the only thing I am certain of is that Epic knows how to make my son spend his allowance money on them.

The only real consolation is that Dad in this case is me, and I happen to love the terribad realm that most Nick Cage movies fall into (I'm still thinking about the sheer awesome-crazy of Mandy). So I am okay with my kid watching Ghost Rider (as long as I don't have to do it a second time!)

I do draw the line at Con Air, though. Hated that one!

Posted by Doctor Futurity at 8:46 AM No comments:

I took an extended break less by choice and more by necessity as work and other demands were just too much. Missed a couple weeks of the Wednesday night game as well....ugh!

On the flip side, I have nothing for the moment but random off-comments to post. Of the randomness....

First off, best wishes to a speedy and smooth recovery to Ken St. Andre. A recent Kickstarter note from Steve Crompton mentioned Ken St. Andre had been in a car accident and was injured. I hope Ken is recovering and on the mend.

I recently secured  handheld console called the Evercade, a cartridge-based retro arcade player which collects bundles of classic licensed games from the 70's, 80's and early 90's into sets. For those who remember those days with fond nostalgia it's a real kick to have, I'll write more about it soon.

I snagged all of the Amazing Adventures 5E books available at Troll Lord Games, and also snagged Codex Egyptius for good measure. I have a keen interest in running AA5E, a shame it doesn't have setup support out the gate on Roll20!

Soup Nazi says "No Next Gen Console for You!"

I tried within what I consider reasonable effort to get an Xbox Series X or PS5, but no such luck. I feel like the way online stores are set up to sell this product only helps the holiday scalpers and is almost actively anti-consumer. I'll wait for next year, it looks like I wouldn't have much choice anyway, so I will instead enjoy my Evercade experience instead; a simpler time!

The Cold War is Bugged

I did snag Call of Duty: Black Ops Cold War for my PS4 Pro, but the game is so buggy as of day two post-release my son and I have given up trying to play it. I am frankly insulted that Activision would release a game with such sheer inoperability, even in offline mode. It's insane....and I've weathered plenty of "day one bugs" in prior CoD games, so I have point of comparison. I thought Black Ops IV was bad....but this is absolutely the worst. For the few minutes of a single game before it froze up and almost bricked my Ps4 Pro we saw a glimmer of fun, and then nada. WTF Activision!

Posted by Doctor Futurity at 3:35 PM No comments: