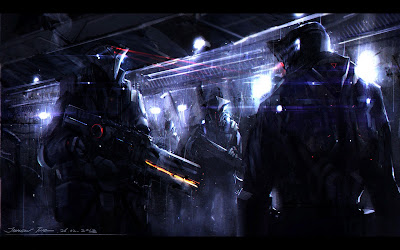 Answering these twenty questions might help establish what SF game is right for you! I'm making suggestions based on games currently in print or easy to get. There are quite a few I like that are impossible to find anymore without combing ebay and old bookstores, so I will leave most of those off this list.

A: You need GURPS Space 4th Edition, for sure. You can also pull this off with Traveller (MGT 2E) with a bit of work and the right source material. If you don't mind horror in the mix then also try Shadows Over Sol.

Q: I want a toolkit system that lets me build the unique SF vision I want.

A: You need Star Hero, GURPS Space, or the Savage Worlds Sci Fi Toolkit. You could also pull this off with Basic Roleplaying with a bit more work (it's got all the rules, just no specific "SF setting toolkit" book supplement).

A: You need Cold & Dark (Aliens meets Event Horizon and Dead Space), or Shadows over Sol, which manages non-mythosesque horror. If you don't mind Cthulhu in the mix, you will want to look at Void Core or it's Traveller version, Cthonian Stars. Call of Cthulhu also has sourcebooks on horror in space, such as Jupiter Rising.

A: You need GURPS Transhuman Space, or Eclipse Phase, or Exilium for sure. You can also accomplish transhumanism with certain FATE Core Products or just a bit of creative effort.

A: Classic Traveller is still in print at several locations, in different editions. You might also like Strange Stars, which comes in both OSR and FATE flavors. You should also look at the reprinted Star Frontiers and the newer FrontierSpace. Also, White Star and Stars Without Number. There's always the latest edition of Star Wars RPG, but for the closest to that seventies vibe look for the soon to be reprinted special edition of West End Game's original D6 System Star Wars RPG. FInally, check out Retrostar, the definitive game of 70's sci fi.

Q: I want lots of space fantasy in my games.

A: Depending on your interpretation of space fantasy, Star Wars RPG may fit the bill. Then there's Starfinder, which is about as "you got your D&D in my SF RPG" as you can get. Space: 1889 does this with a Victorian Steampunk flair, too. Several setting published for FATE Core are definitively space fantasy as well. Shadowrun fits this genre, but without the space part.

Q: I want soft SF and lots of it. I want blasters and FTL drives that don't require lots of pseudo-scientific explanations, or if they provide such it's all just flavor.

A: Then the Star Wars RPG or Star Trek Adventures RPG is definitely for you. Traveller does this, and so does White Star. Stars Without Number fits this bill to a tee. Making these universes is easy enough in Star Hero, and GURPS Space can do it too, if you ignore all the complex math in the book for realistic ships. I think River of Stars would fit well here, too. Hyperlanes is  D&D 5E hack that does this well.

Q: I want a game that takes the singularity and the threat of ASI seriously.

A: If you want this then the closest you're gonna find right now is Eclipse Phase and Exilium. I don't know of any other game out there right now that treats this subject with the seriousness singularity apocalypticists like Elon Musk have bestowed on it.

Q: I want Cyberpunk in my game. Either pure Cyberpunk or just fully supported cyberware.

A: Traveller MGT 2E has augmentations. GURPS and Hero System both provide the tools to build the stuff. Cyberpunk 2020 and it's 3rd edition sequel that we don't talk about are 100% about this. Shadowrun does this, but with elves. Savage Worlds SF Companion provides tools for this sort of setting, but also have Interface 2.0 which is a full Cyberpunk setting (also available for other systems, I believe, including FATE). Most of the good old days Cyberpunk is currently out of print or hard to find, unfortunately.

Q: I want to create a game that feels like Flash Gordon.

A: You want White Star or Strange Stars, and after that think about Star Hero, too. GURPS could do it, if you use lots of the cinematic rules options. I imagine you could derive this sort of setting from Starfinder or Hyperlanes, too. Retrostar would also work.

Q: I really like Guardians of the Galaxy, and want a game that supports that sort of universe.

A: Get Mutants & Masterminds with the Universe Sourcebook expansion, or Hero System's Champions lineup for their universe. If you just want simple rules and the feel of superheroes in space but not the baggage, maybe try a hybrid of the Guardians RPG from Night Owl Workshop and White Star. Hyperlanes also purports to be inspired by the movies, but lacks the sort of powers you'd need without blending in core 5E magic.

Q: I want Military SF, and lots of it.

A: Traveller is your baby then. GURPS Space can do this too on the more complicated end, and for simpler you should think about Colonial Troopers RPG (Night Owl Workshop) with a Starship Troopers vibe, or Star Wars Age of Rebellion RPG with a hard focus on the war aspect of the Star Wars universe.

Q: I want an evocative rule set and universe to explore that is unique, or close to it.

A: I suggest Coriolis from Modiphius, which is as evocative as you can get and is described as "Arabian Nights in Space." Fragged Empire, too, with the caveat that I had a hard time getting in to the rules for that one but loved the setting. Also, Exilium, which is D6 System powered and a beautiful setting of transhumanist ascended being forced to live among the biologicals again for heinous crimes.

A: Then Mutant Epoch, Mutant Future, Mutant: Year Zero and GURPS Wastelands series have you covered. Post-Apocalyptic Hero for Hero System is also a very fun book to own. There's also a spin-off post-apoc game for Stars Without Number called Other Dust that lets you play on post-apoc worlds in the SWN universe. There is a 4th edition of Morrow Project floating around, too.

Q: I want a game that is really well illustrated and helps inspire me as a result.

A: Coriolis is beautiful. The old Alternity RPG from WotC is out of print but was a hallmark in good graphic design. Starfinder is indisputably pretty. Cold & Dark is evocative for its setting (hell, any Modiphius book, such as Star Trek, is amazing). Traveller MGT 2E is actually very well illustrated, such that every piece of equipment in the Central Supply Catalog has a full color illustration (it's utilitarian, but looks good).

A: Then you can choose from White Star and Stars Without Number. Strange Stars provides a sourcebook conversion for use with SWN. Colonial Troopers RPG also fits the bill.  Or just find a copy of Classic Traveller.

Q: I want a game that gives me the best and easiest range of toolkit options as a GM to make games quickly and efficiently, no muss and no fuss.

A: Then you really just need Traveller (MGT 2E), but I'll suggest that FrontierSpace is designed to do this as well, and quite well. Mutant: Year Zero is designed to provide lots of out-of-the book utilities for the harried GM (if you don't mind post-apoc). White Star's Deluxe edition is a shoe-in for this as well. Of all of these, the one I like the most because it is both a quick toolkit and also gives you the most flexibility in universe design is Savage World SciFi Toolkit. The only problem it has is an issue of granularity.....Savage Worlds doesn't need as much fine detail for what it does as, say, Traveller.

Q: I don't mind the crunch; I'll take a complicated toolkit system, too.

A: Then enjoy GURPS Space or Star Hero, they've got it in spades!

Q: Of all these games which one do you think would keep me covered for the next decade of gaming, or longer?

A: Traveller is proven to do this for a lot of people. I'd venture to say FrontierSpace manages to be robust enough for lengthy multi-year gameplay right off the bat. GURPS Space and Star Hero are both capable of indefinite campaigning with no shortage of future potential. Savage Worlds, too.

A: Mythras has good SF potential, as demonstrated in The Mythras Imperative and a couple modules, but like BRP it suffers from a lack of direct sourcebook support. Two 3PP have put out D100-based SF games: River of Heaven is a setting-specific book but pretty well designed. M-Space is more generic (slightly) but also lacks a lof of crunchy tech detail that most SF games need. BRP itself has some now harder to find monographs with SF themes, and while you can technically build SF from the gold core rules it has no direct sourcebook support. Call of Cthulhu has three sourebooks I know of with SF content in them that can help world-build a mythos future.

Bonus Question! (Because I just asked this one to myself):

Q: I want SF which evokes the kind of aesthetic set by video games like Halo, Destiny and Gears of War; military, but with an emphasis on the powered armor guys.

A: Right now, the idea is that games which support elaborate armor details and also lots of illustrations are what help here. The systems that do this best currently are Traveller MGT 2E, Savage Worlds SF Toolkit (lots of armor details, not as many illustrations, but I've actually used it for this kind of campaign a lot), Mutants & Masterminds 3E (the power armor archetype, but thematically maybe not ideal for this genre), and of course GURPS and Hero System if you're willing to do a lot of work (I'm not, not anymore). Starfinder gets a nod because it has tons of armor, with mod options, but the armor level method is kind of strange and YMMV on how you like it. Plus, you can't do hard SF with it without cutting out like 60% of the game.


If you don't see a favorite mentioned....odds are I don't know about it, or have never owned and read it...sorry!


Posted by Doctor Futurity at 6:03 PM