B/X D&D Month I: Pergerron and the River Kingdoms of Anansis

To kick off my April full of D&D I'm laying out the ground rules and setting: everything is going to tie to a new realm, called Pergerron, which I'll detail in the first few days and then use as a springboard for everything else to come. Without further adieu, I introduce the world of Pergerron, land of the River Kingdoms of Anansis...(note one pic below is a bit NSFW).

Here's how it's going to work: today is a brief overview of the land and its history. Next will be a summary of the gods and mythology of the world. On day three there will be a map and brief gazetteer or the region. Then, each day thereafter I will pick one or two regions on the map (which will be divided into sectors) and discuss the adventures, encounters, NPCs and monsters that can be found within. I'll see how many of these I can get in for April....I thought I'd manage one a day, but the truth is that sounds tough to pull off, so we'll see....

Now...it's time for an old fashioned hexcrawl! And to do a hexcrawl, we need a place to visit... 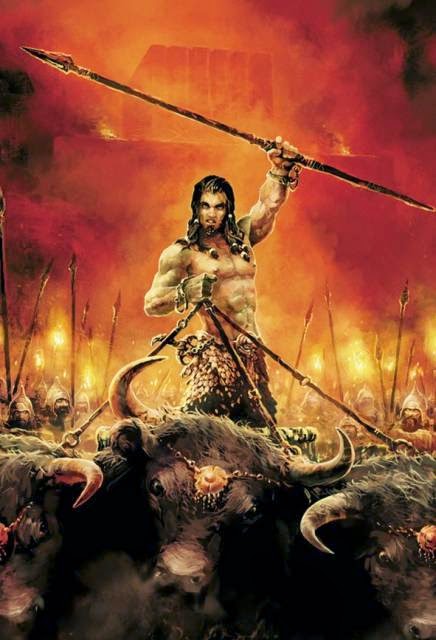 The Lands of Pergerron – The River Kingdoms

Background
The world of Pergerron revolves around a civilized region called the River Kingdoms  (sometimes also called the Kingdoms of Anansis), a collection of polities and city-states that rely on the seasonal flood waters of the River Anansis, a bountiful region which has allowed human civilization to flourish. Pergerron is a largely barbaric land outside of the civilized center of the world, though the people of the kingdoms have found trade partners with other pockets of civilization to the distant eat in the Kingdom of Asparta, and far to the west in the Isles of Esmonar. The southlands, called Vothrace, are a vast an untamed wilderness though some hearty explorers claim to have found a vast empire known as Mesutin beyond its untamable reaches, where ancient sorcerer kings rule.

Pergerron exists in a time shortly after the dawn of creation, and monstrosities are a product of the Primordials, a race of ancient god-like beings which were cast down by the First Men, called the Enkanneth, who in turn took the power of the primordials themselves and became gods as well. The Enkanneth are the principle pantheon of the Fertile Kingdoms, and worship of the old Primordials is regarded as a profane heresy.

Pergerron is dominated by more than humans, however, for it is a land of many ancient and mystical races as well as many cursed beings and monsters. Many of the monsters and cursed races are part of the old kindred, the beings which ruled the world and were created by the primordials before the Enkanneth came and shattered their dominion. Other races were born in the likeness of the Enkanneth, made after their patron gods to carry on as their servants in the world. Such races include humanity, the elves, dwarves, Halflings, gnomes hutaakan, lupins, chameleon men, tortles, pachydermions, and centaurs. Other races which remain prolific mark their creation from the time before, at the hands of the primordials. These races are regarded as cursed, and include the goblinkin, giantkin, orcs, ophidians, nagpa, kobolds, manscorpions, bargda, lizard men, gatormen, gorgons, minotaurs, harpies, gnolls, rakasta, chaos-kin, dragons and more. The races of old and the races of new rarely live in peace. Furthermore, this distinction of “old and new” races is somewhat arbitrary; hutaakans, for example, are regarded as one of the oldest races even though they are regarded as friendly and trustworthy by men. In the end, the distinction is best considered a reflection of those races who are inimical or hateful toward mankind, and those who are not.

Pergerron’s principle population in the River Kingdoms is mankind, though halflings and other races can be found in fair numbers in certain areas. The wilderlands beyond the safe harbor of the river kingdoms are rife with nonhumans and monsters, so travel through this rough and often uninhabited lands is always done with guard and escort. The ancient ruins of the primordial cities dot the landscape, as do the occasional monuments and landmarks that indicate where a great battle took place or a god fell in battle.

Outside of the roads and fortress towns between the major points of civilization, occasional temples will arise in the wilderness at the dictate of the enigmatic Enkanneth, those who were once men then stole divinity from the gods. Those who forge deep into no-man’s land will on occasion come across temples to the old primordials, sustained by the worship of foul monsters. Such locations, when found, are usually targeted for eradication by the templars of the Enkanneth. 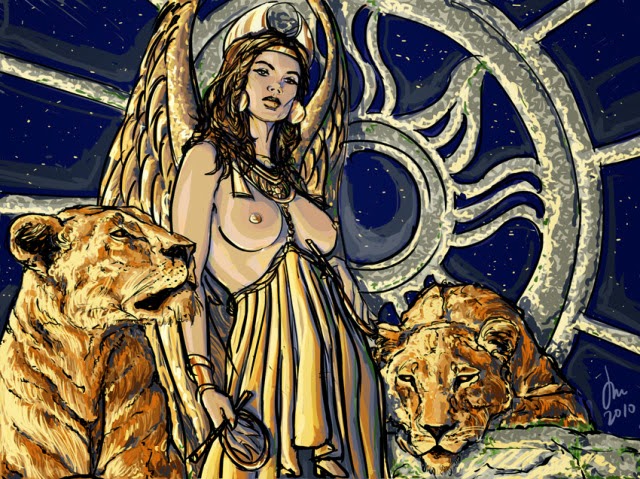 Pergerron has the following ten key concepts and themes built in to it:

Dawn of Civlization – Pergerron is a young world, although the primordials crafted a long and ancient history that can be found in the mysterious and inhuman ruins of the wilderness. Mankind and the sister races are young, having been formed from the clay of the River Anansis by the Enkanneth less than five thousand years ago, and taught the principles of civilization by the great teacher, the goddess named Suliversa.

Bastions of Civilization in a Sea of Wilderness and barbarism – Pergerron is mostly a world of uninhabited wilderland punctuated by moments of civilization. Outside of the River Kingdoms there isn’t much call for warfare in this day and age amongst the human kingdoms, for they are separated by a remote vastness. Populations are small; a large city rarely has more than 15-20,000 citizens, and most communities are much smaller. When war comes, it is with the barbarian tribes and monsters of the wilderness.

Bronze Age Technology – The technology of Pergerron is akin to that of the middle bronze age of Sumeria circa 1700 B.C.; copper is still in use though bronze has superseded it as a more reliable metal. Iron and steel are still largely unknown and relic weapons of the primordial era are the only reliable source of such ancient metals at this time. Science and technology is in its infancy, and most civilizations fret about the basics of commerce and agriculture, the foundation of language and the rule of law.

No Divine Intervention – The gods exist, or so any native would assert, and they work in mysterious ways. The reality is that the gods do not manifest or intervene in any way easily identifiable to any other than the priests, but the miracles granted to priests are more than sufficient to prove the existence of the divine to most people. Cult members can experience profound visions revealing the secrets of the Enkanneth, but outside of these hallucinogenically induced visions the gods only work in ways akin to nature. The primordials are likewise absent, though their handiwork can be seen in the mysterious relics, monstrous kin and ancient ruins of the wilderness.

Man is the Driving Force of Pergerron – The men of Pergerron, amongst humanity and the other races, is the force behind change, for better or worse. No divinities manifest to make change, though a leader might swear that his god speak to him in dreams.

Magic is Real but Largely Mysterious – Magic exists, yes, but it is a mysterious tool at best, and there is currently no industry built up around it, nor any regular resource for the production and sale of goods or services based on magic outside of the most elemental fundamentals. Most mages are hucksters and charlatans; real magic is feared and readily misunderstood, as well as coveted by those who do not have talent for it. Most artifacts and magical devices are actually ancient relics from the primordial era, and often the use of such is regarded as heresy by the cults of the Enkanneth.

Other Realms Exist but are Misunderstood – There are other domains into which mages can tap, and these are the realms from which spirits and entities such as demons and seraph may come, but little is understood about these realms. Hazata is the term used to describe the hellish realm of the demons; Harisku is the domain of the spirits, and Nezumei is the domain of the seraph. These are understood by some practitioners to be other worlds, though whether they are planets in the sky (and indeed all three are identified as planetary bodies) or simply convenient place names for something else entirely is unknown.

The Afterworld is Called Zhol’Dran – and it is a feared dominion, where all of the dead assemble to await a time when the Enkanneth will call upon the fallen warriors of many ages to once again strike down the primordials. The myths of the dead in Pergerron speak of a time when the primordials will rise again, and it is the harvest of human and humanoid souls by the Enkanneth that breeds the army that will defend the world from this next incursion. Or so the legend goes. Mages and priests of the land know only that sufficient strength of will can allow for a spell which restores life to the dead (and can also create undead), but such resurrections always require a heavy toll to the one who benefits….a life for a life.

Ancient Mysteries – Everything described as myth, legend and history as above is filtered through the eyes of men who struggle to learn about their past and their world. All of it could very well be false, but it is the record of ancient legends carried down through the ages by the priests and loremasters of Pergerron that assert some validity to these tales, as well as the existence of monsters and mysterious ruins of old.

This setting will use the B/X D&D rules, with the following additional rules from the D&D Rules Cylcopedia:

1. Demihuman classes use the optional leveling rules in the RC (they don't cap).

2. The RC skill system will be assumed in stat blocks.

3. Optional combat rules from the RC (such as two weapon fighting) are in place. I'll be using individual initiative rules from the Basic book as a default for whatever I run, but obviously that's personal choice.

4. Any racial classes you have access to which allow one to play hutaakans or other demihuman races are allowed.

5. Again my preference but I let everyone start with max HP at level 1.

Tomorrow: The gods of Pergerron
Posted by Doctor Futurity at 6:00 AM