A Friendly eReader Service Message: on reading comics on tablets, how to speed up your Nook HD+ and other stuff

A few things I have learned about eReaders recently worth noting for those who haven't yet discovered (the hard way): 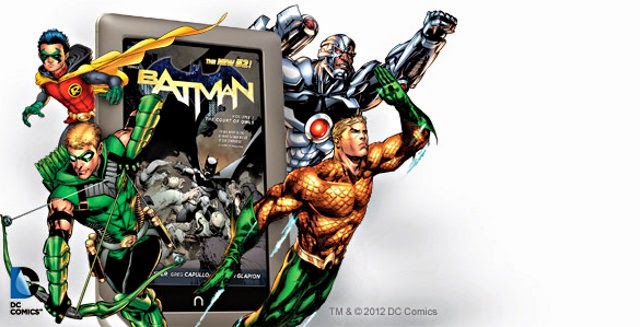 Reading Comics on eReaders and Tablets:

This one has a few no-brainers, but there's definitely a "test the waters" approach to reading comics on ereaders right now. I've been buying more comics in electronic format lately (mostly the stuff that looks interesting but isn't part of my Batman/DC Universe obsession) and have a bit to say on the subject that may save you some headaches.

First, it goes without saying that you want a decent high resolution tablet for the job. The Nook HD+ is the best bang for your buck in this department, but the Nexus 7 (2013 edition, my son annihilated my 2012 edition) is also rather nice. Larger screen size helps a lot, but a high resolution can accomplish much.

So here's what you want in a good comic ereader:
1. Decent screen resolution
2. Decent screen size; 7 inches on the Nexus is the bare minimum...I get a lot more enjoyment out of the Nook HD+ screen.
3. An app that lets you expand/contract pages
4. A retailer that sells you a decent hi-res copy

So who meets the requirements? Each of the following were tested on my Nook HD+ and Nexus 7. I disqualified the Microsoft Surface as I have the 1st generation basic model, which has a 768X800 resolution, and that's acceptable but below what I consider the minimum standard for a comfortable viewing experience (the 1080p resolution on the Nook HD+ has really spoiled me).

It borders on the tortuous to read comics on the Kindle App. The only Kindle device I own is the Kindle Paperwhite, and that's not a device you want to use to read comics on (trust me) so I used the Kindle App on the Nexus 7 and Nook HD+ in absence of a Kindle Fire. Unfortunately the Kindle App's strategy for letting you try to read comics on it is a "double tap to expand the panel" feature that basically magnifies roughly where you tapped, and also glaringly shows that the file sizes of the Kindle comics are smaller than the competitor's because they are lower resolution. The Kindle does not let you expand/contract pages nor does it let you take full page spreads and view them length-wise by holding your tablet sideways; you are locked into one view mode, essentially.
Rating: F

The Nook store lets you download decent file sizes quickly, and the resolution is very nice. The reader lets you expand and contract the page as well as view it lengthways by turning the tablet on its side. You may pay a few cents more on average for comics in the Nook store but the quality and ease of use is well worth it.
Rating: A

Google Play has the largest download files and it shows: the pages are crisp and look great on the Nexus 7 as well as the Nook HD+, making for the best reading experience by far. The experience was light night and day from the Kindle's lower res, limited functionality editions....and in fact I started this process with Google Play, so the net result was a wave of disappointment at the low quality on the Kindle. The Google Play store often has some decent sales but the prices are, like Nook, slightly higher on average....but the tiny extra cost is well worth the much more satisfying reading experience.
Rating: A+

Anyone who reads comics knows that as a medium the comic artists and writers take advantage of the full page and sometimes two-page spreads for effect. If the ereader can't accommodate this then it's not worth the time. Whoever designed the "panel exansion" idea for the Kindle App doesn't understand that you don't just read "one panel at a time" nor can you really grokk what's going on in a panel when your double-tapping only highlights part of the image. Luckily Google Play and Nook both understand this and offer a better suite of tools to do the job....with Google Play winning out by virtue of it's excellent hi-res (and very large) images.

What to do when your Nook HD+ is slow (alias: how to make it work instead of chucking it out a window)

This is a real thing. Apparently many Nook HD+ tablets acted a little...weird....after the updates last year that embedded Google Play into the device. I don't pretend to understand the history of these updates, but if you have a Nook HD+ and it acts like it's operating under an XP-powered OS on a netbook from 2005 riddled with spyware then fear not, there's a quick and easy solution that does not involve violence:

Deregister and Erase in your machine's options, then re-register and download all your stuff again. It works like a charm....I have no idea if that means the updates from last year were staged in a way that led to suboptimal performance or corruption of files to cause a slowdown....or it doing this simply cleared out whatever invisibe homunculi were torturing the poor tablet, but after I did this I had my Nook HD+ back and it runs as smoothly as my Nexus 7. So take this tip to heart! 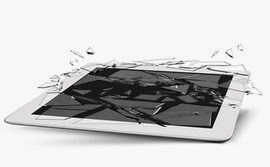