Continuing an exploration of a distant western region across the Sullen Sea...

Phantomax, The Geat City – a vast urban sprawl of steel and steam and ancient works that stretch along the northern edge of the Burning Dust. Ruled by the Council of the Phoenix, a plutocracy of the city’s elite. The city has seen no threat strong enough to penetrate its immense walls, nor has it been subject to loss of territories for centuries. The city is sustained through the export and import of goods in its provincial holdings, which run along the length of the Seer’s River and out to the Sullen Coast, along the length of the Sea of Sorrows.

West of Phantomax are the lands of Precarion, a great untamed wilderness along the north stretch of the Silverflow Mountains. East across the sea are the Isles of Esmonar. Beyond Esmonar are the Wastelands of Sul and even stranger, including the primitive river kingdoms of Anansis.

Phantomax is the last of the old cities, the only “ruin” that remains fully operational and inhabited by humans. It is steeped in ancient history and the people of the vast city state still recall the old technologies, and have some familiarity with the mysterious conflict that led to the destruction of the primordial by the Enkanneth. Of key significance in this knowledge: the primordials are ancient, powerful beings but were not regarded as gods; when mankind arrived on Pergerron they were a minority, and subjected to the whims of the primordials’ many engineered races. It was the rebellion of the Enkanneth, the ancient word for the “first ones” that the rebellious humans rose up and cast off the control of the primordial. The ones now revered as gods were but men, and they stole the secrets of cosmic power from the ancient ones. Phantomax is the sole city that was not destroyed in this time of liberation, and it is in fact the home of the only enkanneth who still dwells in the so-called “principle realm.” Abia, the goddess of secrets, is the enkanneth who stayed behind, though it is said her mind projects through astral realms untold. The rest conquered the Outworld of the primordals and took it for themselves, leaving the knowledge they had liberated from the primordial and their servitor races behind to aid man in his rise to greatness.

In Phantomax, however, the font of all knowledge is carefully guarded in the temple-libraries to the priests of Abia, who has served directly for a thousand years in raising man’s consciousness, if not his sense of destiny. Thanks to her, the old ways were not lost and destroyed like they were across the rest of the world, and were instead absorbed and cultivated into a new way of living in the Great City.

Life in Phantomax: the city is a dense arcology of ancient dwellings heaped upon one another with only a semblance of humanity draped over the vast carcass in the last millennium. The founders of the city were monstrous and alien, and worshipped dark primordial beings which promised life in exchange for obedience. The priest kings of these primordial would dream dark magic and use their power to terrify their subjects. The city grew up as a great temple, mausoleum and pinnacle of the madness and terror that the primordial inspired.

When the city was taken by the human slaves under the leadership of the Enkanneth shortly after they found the cracks to the Outworld and stole the power of the old gods, it was with massacre and butchery in mind. There was to be no surrender of the beings which lurked in the dark corners of the city, only wild and barbaric madness. Still, the center of the city was a great hive-like pyramid in which the lore of the ages was kept. Abia, the young immortal Enkanneth of knowledge realized its value to all and stopped the destruction, seeking to make the temple her own. The human and demihuman cultists of the Enkanneth spent a century fully purging the temple of the primordial minions and influence. Even then in the deepest bowels of the pyramid it is said that there still lies a crack…a rift….to the Outworld and that Abia stands vigilant at the entrance to this day to insure no primordals return.

A few priests of Abia worry that her vigilant guardianship of the rift to Outworld has subjected her to dark, corrupting energies. They sense that she is not…the same…as she once was. But what does one do when your immortal divinity is charged with such an impossible task? So the priests carry on, hoping the stories of fallen Enkanneth are not true, administering to the poor and needy of the city while translating the millions of sacred texts in the pyramid and hoping that when all is done that Abia…and Phantomax…will be well.

This curious history has led to a strange and unique culture in the city itself, which stands apart from all of the other cultures of man to arise in the world, including the River Kingdoms of Anansis, the people of Precarion, Vothrace, Esparta, Esmonar and beyond. Men who are not of Phantomax intrinsically distrust the dwellers of the Great City, for they can sense that the indelible taint of the ancient primordial architecture has rubbed off on them. They can feel that there is a soulful corruption of these men, and that they must keep their distance. The men of Phantomax don’t sense this, of course, and they chalk such accusations and suspicions up to the superstitions of the barbarians of the world who refuse to adapt to the ways of the Great City. 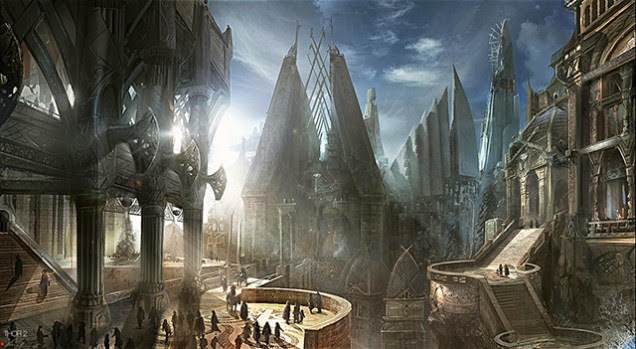