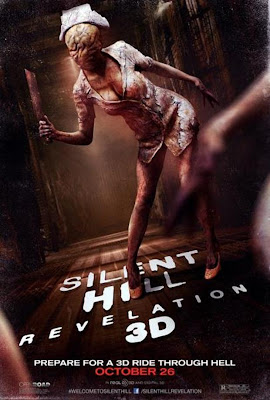 Holy cow, I made it. Blogging random topical stuff related to one's particular interests is one thing. Setting out to specifically meet a quota (for fun and not profit, admittedly) is something else. Still, it was worth it, and the fun in reviewing films for a month has taught me that I ought to do this more often. It's fun to analyze movies, to wonder about what they did right as well as how and why things might have gone horribly wrong.

Speaking of which, Silent Hill Revelation is up next! I ponied up for a 3D matinee showing (so, about $11) and saw it today. I was the only one in the theater on a 5:10 PM showing. Pity horror movies don't scare me anymore, that could have been cool.

In fair disclosure, I forgot to mention that my review of Resident Evil: Retribution was for a standard (non 3D) version and I saw it in a discount theater for $2. By contrast, Silent Hill Revelations was full (matinee) price and was in 3D. As usual, no movie I've seen in 3D since Avatar has been worth the extra few bucks. Also, I would have been less annoyed at this movie if I'd waited to see it for $2 as well....my bad. Wife and kid are out of town for a few days again, had to seize the opportunity while I could!

Watching all these Resident Evil movies as well as Silent Hill Revelations has made me realize what might be going on in the development cycle of game-to-film design. I think it starts something like this:

Studio lands a deal for using the game IP. Marketing howls in triumph.

Early on, game studio hands over the game, the art assets and script used to develop said game. The people picked for set design, costuming and FX go hog wild with the amazing assets laid out for them. This wasn't always so; there was a time (when games still looked like ass and our imaginations filled in the cracks) that the team poo-poo'd the assets and did their own thing, enraging the fans.

The script writers are handed copies of the game and maybe the development script and assets used for the "story" part of the game. It's not in a format that they can assimilate from their screenwriting experience, and they chuck it. Someone is tasked with playing the game, but he's not really one of those "gamers" so he hands the game off to his son, who plays it and when his dad asks for a summary he copies and pastes the summary of the plot from Wikipedia. Second possibility: no one bothers to play the game because it requires too much attention for hopped-up Hollywood to bother so they just cut straight to Wikipedia.

Someone reads the Wiki and culls out all the stuff that makes no sense without context. Then they paste in the stuff that generations of film writing have burned into their heads must be in any film for a perceived demographic.

"This has monsters in it that look sort of like Pinhead. Oh, look at all the pictures of rusted metal and torture instruments, maybe its more of a Saw movie. Hey, the Wiki says there's a cult in town, lets get a metric ass ton of extras to run around populating this place as cultists. What's with the fog? I dunno, the wiki doesn't say much. Let's explain it as ash coming down from a burning coal mine, like that story I read about on Cracked.com. Yeah, that's the ticket."

"What's that fog horn noise? Hey, it must be a fog horn because, you know--fog. Or better yet, one of those old air raid alarms. Who's this triangle-headed dude? Oh, he's...um...pyramid head. The wiki doesn't say much about him. These nurse monsters? I dunno, but wouldn't it be cool if they were all, like, twitchy and stuff when they sensed movement? And it gives the FX guy a chance to hobnob with those models for, like, hours while they slather on that makeup."

The end of development gets close. "Will this appeal to the fans? Sure, we've gotten all the characters named in the game to look like they do in the art stills. But will it appeal to the millions of people who've never even heard of a Silent Hill game? Yeah, we've added in a love interest, and this game's pure gold because its protagonist is an 18 year old girl who's all about being an outcast, so we've got the Twilight crowd element in there. And we've got the father figure for all the old farts who played this game when it was new. Oh, and we've got lots of sudden shocks and spooks and thrills, because we heard that was really big in the game. What...that was Resident Evil? This game was all about psychological horror and shared purgatories? What does that even mean? Hell, it's not like we've got David Lynch directing, anyway! Well, doesn't matter, and it's also not like we're filming hours of someone walking around in fog, right? Bwah hah hah!!!"

And on it goes. The end result is someone who has parsed out a Cliff's Notes version of their target product, glued on art assets to make it look cool, and then filmed the thing. Meanwhile, no one has noticed or tried to understand what anyone who's played and enjoyed the original games are talking about when they refer to psychological horror. There's no connection between the imagery, the monsters, and the subtle underpinnings of deep psychological trauma made manifest in a dark purgatory that is a shadowy mirror of the minds of its trapped victims made real.

They're best hope now is that the movie, which they are already sure will be picked apart by its pedantic, obsessive fans, will instead grab the actual casual movie-going crowd that wants to see a scary movie.

To help this crowd understand, Silent Hill Revelations front-loads a metric ton of plot exposition in the first twenty or thirty minutes. You will not have to guess about what's going on or why. The absolutely bizarre and disturbing elements of the game series in which the player can often make it through the entire game and still not be entirely sure of what happened on that first play through is gone here; it's spelled out so plainly that they might as well have shown a 3D mallet beating it into our skulls. The plot, by the way, is fairly similar to (based on) Silent Hill 3, and in principle it is a fair modeling of said plot....with the caveat that the depiction of said plot was derived entirely from the screen writers using the Wiki to summarize it.

I tried to think about whether this movie was enjoyable from the angle of someone who had no familiarity with the games. It was kind of hard to tell, to be honest; the horror was there, but they periodically threw in hapless victims that Heather, the lead character, stumbles across specifically so she can see them get dismembered. Heather is a decent character here, and I do feel that they nailed, fairly accurately, the onscreen version of the same protagonist from Silent Hill 3. But everyone around her? Horribly two dimensional, put in specifically because the people making this film appear to understand shock horror and splatterpunk gore far better than they understand the more subtle and disturbing undercurrent of gnosticism that powers the Silent Hill universe.

The movie throws a couple fun bones out at the end....if fun means "painful teasers for the small chunk of the audience that actually played all the games," with a quick introduction of the truck driver Travis Grady (from Silent Hill: Origins) and a quick shot of a prison transport that is no doubt transporting Murphy Pendleton from Silent Hill Downpour on board. Surprised we didn't see a lone war vet heading home at the same time, or a guy sitting in a room somewhere, for good measure. The movie also keeps Harry Mason alive all the way to the end, where he stays in Silent Hill to look for his lost wife. A vague, half-hearted allusion to Silent Hill 2? Maybe.

Unfortunately this movie was just more annoying than funny, unlike the hysterical Resident Evil films which won out by virtue of sheer audacity. It was sort of fun to watch, but just not as much as a better film with more effort would have been.  I give it a C-, because it clearly had so much potential, but the only way that a good Silent Hill film will be made is if someone were to talk Guillermo del Toro or David Lynch into doing it. Then, maybe....just maybe....we might get a movie worth seeing.