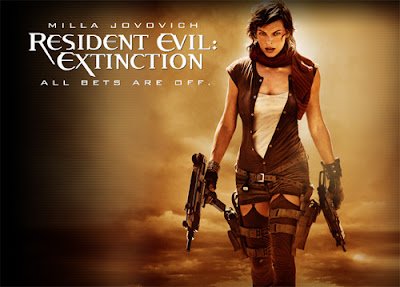 2007 demonstrated that you could take an established franchise and carry it in a direction that the IP holders probably never imagined. The third movie in the Resident Evil franchise starts by dispensing with more or less the entire body of canon which the two previous films had paid some measure of lip service to. It’s four years later and the world is a bloody shambles, as the T-Virus has decimated plant and animal life across the globe, stolen our water and apparently turned everyone except for Umbrella execs, faceless goons and a handful of survivors into endless hordes of zombies. Umbrella has some operation in the undefined Midwest out of which their resident mad scientist is trying to replicate the creation of a new Alice, whom he can use to synthesize some sort of serum from her blood, but for some reason he’s obsessed with running her through a gauntlet of traps inspired by specific memories of her experiences from the first movie. Meanwhile Alice is on the run, and her destiny as usual is about to converge with some hapless survivors, some of whom made it to the end of the second movie.

Here’s the weird thing about RE: Extinction: as a “movie based on the game” goes, it’s terrible, unless you said that game was Fallout 3, in which case I’d say, “yeah, I can see it.” But as apocalyptic zombie horror flicks go, this one’s not half bad. If they could just jettison the Resident Evil universe baggage, this movie could almost stand on its own as a fun post-apocalyptic romp with zombies.

There are problems, of course. Alice is a super-heroic horror hero with supernatural abilities ranging from amazing wire-fu prowess to randomly functioning psionics that do whatever looks cool on screen or the plot calls for. She’s almost completely gone Mary Sue by now, though the formal transition doesn’t fully happen until the end of the movie.

The movie continues with the pretense of being somehow related to its source IP by naming one character Claire Redfield (played by Jodie Foster kinda-lookalike Ali Larter) even as Umbrella Corp. remains the Big Bad. Wesker appears for the first time in a notable way, as the behind-the-scenes exec who is pulling the strings. The fact that they even bother to puppeteer these characters on stage as if they bear any relationship to their in-game counterparts is amazing. This movie only makes canonical sense if you try to imagine it as a super divergent extreme in GURPS Infinite Worlds, behind multiple other divergent realities from “RE baseline.” If you look at it like that, this reality is Alice 6+n or something.

Okay, so if you take this film for what it is: a post-apocalyptic zombie flick that pretends it has ties to another IP entirely, does it work? Short answer yes, but with caveats. Long answer: yes, and then you get to the end.

The movie holds its own well, and the special effects are really decent this time around (zombies are starting to look good here). The plot is basic survival but done reasonably well. The underlying premise (of a promised land) has been done better in other movies (notably in Mad Max Beyond Thunderdome) but that aside it holds fairly well here. Someone should explain to Anderson and co. that helicopters aren’t usually known for flying vast distances (i.e. across half the country…or to Alaska), though. Well, it’s the future. Maybe they’re running on unobtanium or something. Umbrella seems to have a lot of it lying around (more in a minute on that).

So the movie holds well until Alice gets to the end of the road and seeks to shut down the Umbrella operation that’s been cloning her for experiments. A few weird things happen that just totally derails this film at the end, although not in a “what the hell I can’t enjoy this” sort of way, but more like a “Gee I guess they didn’t really want to do a sequel, eh?” kind of way. Also, a “what the hell is that and why isn’t it more important than all this T-Virus crap?!?!?” sort of way. Specifically:

Clones Clones Clones: at the end of the movie we know Alice is being cloned so they can develop a serum that makes zombies more obedient, although the mad scientist figures out it makes them more aggressive and cunning instead. Then a new AI pops in and informs Alice that her blood holds the cure, possibly, to the whole mess. Okay….typical Hollywood “blood is a serum” approach to Science. I can deal with it.

Then, toward the end, Alice discovers that they aren’t just cloning her a bit, they’ve got a veritable warehouse full of her clones. We’re at the end of the line, and the entire world is starting to look like its going to be populated by only three types of creature now: Alice clones, black-suited Umbrella goons, and zombies. Ay yi yi brain hurts!!!!!

Then a bit of “fridge logic” hits as well, albeit for me it hit while watching: each Alice clone is nurtured in a circular orb of water held together by some sort of projecting force field. Cool, sure. Typical throw-away special effect, I imagine.

Now just consider for a moment what we’re looking at here: not only have Umbrella perfected human cloning, the T-Virus, holographic technology and artificial intelligence, they have also invented some sort of gravity/force controlling projector. Holy crap. They’re so busy unleashing a zombie apocalypse nobody bothered to notice Dept. 13D down the hall had just discovered how to manipulate time, space and gravity....and Dr. Bozo co-opts it for his little sick clone-torturing experiments.

So Umbrella is basically a giant slush organization for mad scientists, and it just so happens that they got a bit carried away with the ones who made a mutagenic zombie-generating, monster-making virus before the guy with the power to control gravity and matter could show them what he had going along with its many world-destroying applications. Gotcha.

The only thing more bizarre than how this film ends is how the sequel starts…hint: it does not start with an army of force-field wielding Alice clones spreading the blood-cure across America.

Anyway, I give this movie a A- right up until the end, when it goes so far off the rails I can’t even see what letter it earned. Maybe a “W” for “WTF?!?!?”

Next Up: Resident Evil - Retribution Review