Thirty One Days of Horror: Survival of the Dead 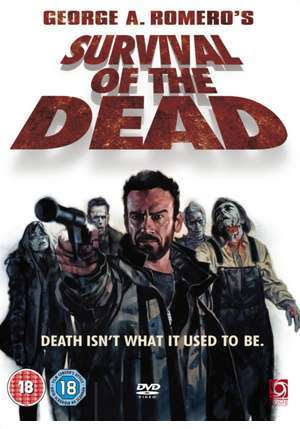 Day Ten: Survival of the Dead

George Romero's universe of the dead is interesting because he keeps generating these fantastic zombie movies, all more or less set in the same universe, a world overrun with slow, shambling zombies. Romero's zombies might have spawned from a satellite returning from an exploration of Venus, or maybe it was a comet's tail we passed through, or maybe Hell is full-up. The thing about the Romeroverse is that the reason the dead walk isn't all that relevant. What counts here is how people deal with it. This being a universe of schlock B-movie personalities, rife with criminals and madmen, you can guarantee that the survivors will be as dangerous as the zombies around them.

Survival of the Dead takes place chronologically sometime around or after Land of the Dead (best as I can tell; its only assertion is that "time has passed.") This film cuts to the chase; the dead are already up and about, and the story focuses on two angles: crusty old madman Patrick O'flynn ad his crew are on a remote island where they seek to put down the undead for good to make the island safe, even if they have to spill some blood to do it. On the other side of the fence is Seamus Muldoon and his posse, part of an eccentric family that has a long history of keeping their dead in repose. The zombies are a chance for Muldoon to insure peaceful cohabitation between the living and his dead relatives; naturally the two come into conflict, which ends with O'flynn being expunged from the island.

In steps Sgt. "Nicotine" Crockett, an awol national guardsman and his dedicated crew of survivors, who have given up the fight of a crumbling nation to become highway robbers and survivalists. Crocket and crew are slowly running out of steam and need direction. After stumbling across a kid that they liberate from a gang which may or may not be symbolic of the rednecks hunting the undead at the end of Night of the Living Dead, they learn from him of a mysterious Mr. O'flynn somehow broadcasting a message over the still-functioning web the promise of an island of safety.

Naturally Crocket and crew run into conflict with O'flynn and his buddies, who have been engaging in some maritime robbery of their own, after which they send the robbed folk packing to the island. Crockett has none of this, and he and his crew make their way to the island. A twist of fate puts O'flynn with them, and when they get to the island the meat of the conflict begins.

After that...bad things happen, but its better not to offer up any spoilers.

Survival of the Dead changes its tune several times throughout the movie, and it is ultimately an interesting case study in how to do a horror film that manages to swing from brevity to grim and dark in a matter of minutes. The film is compelling, and despite having some pretty weak story and character flaws at times it still manages to present what feels like a believable zombie tale (at least until you stop by the fridge later that night and realize its got some weird problems).

Spoilers ahead! Hard to discuss these problems without spoiling them.

First, I was bothered by the opening scene in which O'flynn and co. gun down a woman defending her zombie children. The reason? No one seems remorseful beyond her husband. In some sense I could see why later on, but really, the reason I would have thought they'd give O'flynn for his banishment was "shooting the live woman," as opposed to what he actually did get banished for (shooting zombies).

More over, Muldoon and his crew are supposed to be harvesting zombies, trying to teach them to engage in harmless activity, or eat animals instead of humans. Barring the logic behind it (i.e. so you teach them to eat animals, so what? That's just broadening their palette, and they are already indiscriminate) Muldoon ends up shooting a lot of zombies, at times where he really shouldn't have been. It made for a weirdly contradictory character, but not in a good way.

Another problem: how did the horseback-riding zombie daughter of O'flynn get on that horse to begin with? I can buy the idea in the Romeroverse that zombies ape or mimic behavior they had when they were alive, but...horseback riding? Hmmm.

I like how you can have groups of survivors who, as best can be determined, may have survived for years in their condition, until a film camera gets trained on them, then death comes fast and frequently.

Why did Janet (Kathleen Munroe) let her zombie sister bite her? Maybe she was supposed to be suffering some sort of silly misimpression that her sister was not...hungry...? I don't get it. You don't live several years into a zombie apocalypse by getting sentimental with your sister's hungry corpse.

There are more oddities like this, which I could get into, but the needless bitching would give you the impression I didn't like this movie. In fact I really grew to enjoy it, and the film's strength in carrying the story forward even when the events and characters portrayed didn't always seem to be logical or smart is a testament to the power of the director and his crew.

Ultimately, this movie was interesting because it falls into the same special subgenre that Zombieland does: it's not actually a zombie movie. This is a drama/revenge flick retelling a snippet of the Hatfields and McCoys, but it just happens to have picked a backdrop of the zombie apocalypse.

No zombie fan should miss this. I'd give it an A, but the character oddities and plot questions knock it down to a solid B.

Email ThisBlogThis!Share to TwitterShare to FacebookShare to Pinterest
Labels: Diary of the Dead, horror, movies, reviews