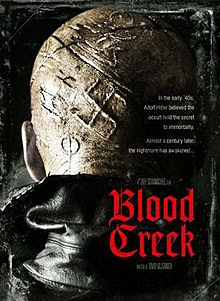 Blood Creek was unexpectedly awesome. Picking random films on Netflix is like reaching into a grab bag of candy on Halloween....you never know if you're going to find some delectable chocolate or a mass of hideous candy corn. Blood Creek is sweet, sweet chocolate.

This 2009 film has been popping up as a "You might also like..." option on Netflix for me for a while now. Every time it did I ignored it. Finally one day I stopped judging a DVD by its jpeg and decided to watch it. Turns out, this is a movie about three of my favorite things: the occult, the undead, and Nazis. All in one film! How the hell did I overlook this one so long???

The story opens with a bit of a prologue, it is the mid 1930's and the German immigrant Wollner family are invited to play host to a visiting German scholar, sponsored by the Reich. A true honor, hard to turn down, of course! Richard Wirth (Michael Fassbender) is a true dedicate to the Third Reich and an occult scholar...it seems he has taken a deep interest in one of many ancient runestones left by lost Nordic explorers who came to the Americas long before Columbus, leaving behind an ancient artifact of incalculable power and evil. This runestone powers blood magic, and through it one can learn to raise the dead and the secrets of immortality, it seems. The young Liese Wollner (Emma Booth) draws Wirth's interest as he demonstrates his necromancy on her recently deceased pet bird. Things are going to get uncomfortable for the Wollner family... 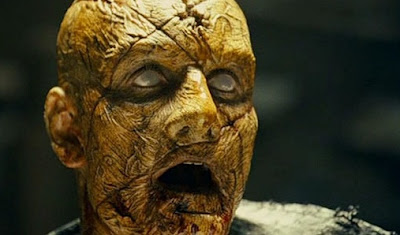 Cut to the present day where paramedic Evan Marshall (Henry Cavill) is dealing with all sorts of rough stuff on the job all while supporting his elderly father and helping out his sister-in-law and her kids, who've been having a hard time of it ever since Evan's brother, an Iraq war vet, came back and disappeared on a camping trip in the mountains. It's been long enough that Evan's convinced he's dead.

I'll concede that despite the great prologue, the bit with Evan was so generally bleak and unpleasant that I got this momentary vibe that the film was about to pull out a lot of typical bad movie tropes as it strove forward. And then Victor Marshall (Dominic Purcell), Evan's missing brother, shows up in the middle of the night, a ragged wild man who looks like he's been through hell. He needs Evan to go with him, back out into the wilderness, up river in the boat. And to bring guns and ammo, lots of it, no questions asked. Being the dedicated brother he is, Evan complies, especially when he realizes someone's tortured Victor, badly.

So in less than twenty minutes we get a mysterious pre-war Nazi occult themed prologue, a dark and moody "brother trying to do right for his damaged family" lead-in, and then suddenly this turns into torture film backwoods revenge flick. Time to buckle up! This movie is clearly aiming to be a  different mix from the usual horror fare of the 2000's.

Evan and Victor forge their way into the deep woods upriver and eventually find a lonely property with a vast fence marked up with odd symbols. They make their way onto the property and Evan realizes that Victor seems intent on killing or harming what appears to be a seemingly normal family, including a the fair Liese, who Evan spots looking out a window in the house. The house itself is also covered in odd red marks...runes, if you will....all over the doors and windows.

I hate to spoil much more, but we'll summarize it as follows: the family has hardly aged a day, and is the same people we saw in the prologue. There's something weird and disturbing going on, and Victor is maniacal in trying to find the man who did the damage and drives the family: Wirth. It is quickly evident that the family, too, is terrified of Wirth, and when the patriarch of the Wollners arrive home things go south, fast. Wirth, it turns out, is alive and well in the basement where they lock him up when they can, letting him loose to feed on the odd derelict or stranger they kidnap and lock up in a torture chamber made out of an old shipping crate. Wirth doesn't look so good; he's sporting a snazzy SS trenchcoat but he's got a decidedly undead quality to him, as is quickly evident by his ability to shrug off bullets. Things go from bad to worse when the brothers, along with another captive and the surviving family held hostage hole up in the house; it seems the runes are designed to keep Wirth out.

Wirth is essentially a lich, or possibly some sort of strigoi or vampire, but with all the characteristics of an undead killer and the evil mindset of a determined necromancer. He's gotten good at raising the dead, be it man or animal, and puts those who have died to good use. He's determined to see to it that this night is his last in captivity on the farm, and he intends to awaken the occult third eye, the end of his blood magic ritual, and make his escape into the rest of the world...

This movie has some really cool stuff in it, and I am loathe to spoil it, but if the idea of an undead Nazi necromancer, an evil undead zombie horse (awesomely well done special effect), the occult mystery of the third eye made manifest in all its evil glory, and an ending that promises so much more and hints at the vast and impressive legacy of evil spawned by the ancient Thule/Norse runestones...if all of that sounds even a bit interesting, you should check this out.

For me, this is the sort of movie I most relish when I find it. A+! The Death Bat is a happy film goer tonight.