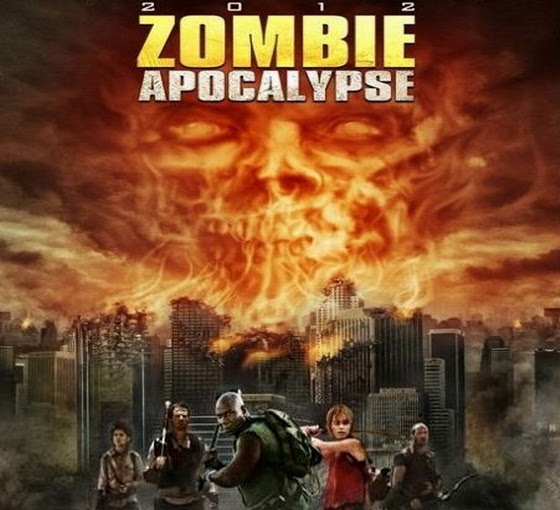 When the SyFy logo popped up at the beginning of 2012: Zombie Apoclaypse I almost stopped Netflix to look for something else...luckily I struggled through the opening few minutes to discover what might be the most decent SyFy production I've seen. Who could have guessed?

This is a 2011 release (presumably first on the SyFy channel then direct to video) featuring yet another post-apocalyptic zombie tale. We zombie and post-apocalypse fans have been drinking from the fire hose for some time now, and this movie is yet another delectable drop. 2012: ZA stars Gary Weeks and Ving Rhames, much to my surprise; the rest are probably actors I'd recognize if I watched more made-for-TV films, but having a couple decent guys involved in the film adds a modest weight of authenticity to it that you wouldn't otherwise get with this sort of movie. Ving plays Henry and Gary plays Mack, and together they hold together a rag-tag team of survivors working their way westward to the promise of a safe zombie-free Catalina Island off the coast of Los Angeles.

The opening scenes in the film may seem off-putting at first, as a trio of survivors including Ramona (Taryn Manning) emerge from their safe hideout to investigate what has happened over the last six months. They quickly fall prey to zombies as they engage in a predictable series of very un-survivor-like behavior, but all is redeemed when the real survivors we're supposed to root for, led by Gary and Henry, show up and save Ramona and one of her buddies. They then tell them about the news of a safe island to the west, and their intent to get to it.

The movie focuses on the journey, the details of a group of survivors who are clearly inspired by the Left4Dead franchise, as they overcome various obstacles and deal with the rigor of surviving a hostile world gone straight to hell. It's a pretty good job, and even though it's a SyFy film with all the subpar-CGI you've come to expect from such fare, the bulk of the establishing shots, general editing and most of the apocalyptic scenery works really well. The zombie effects are not typically bad, but harken back to an older style of zombie, in which an occasional zombie is focused on in greater detail with better makeup, and most of the extras as bloodied up precisely as much as is needed to make them work in their mob scenes. I've seen worse, and there's nothing at all wrong with the film's presentation of its star monsters....although when a person goes through the change into a zombie, they do rely heavily on a rippling skin effect that, while unique, doesn't really hold up to scrutiny.

The other bad special effect comes at the end of the film with the obligatory boss fight. Spoilers ahead! The boss in this case are some zombified tigers which don't really work, suffering as they do from the modest and underpaid CGI talent of whatever FX studios produce this stuff for SyFy. That said, this movie is one of only a few zombie flicks that address the way animals are affected by the zombification process, so kudos to them for including such ideas in the first place.

Throughout the movie there are odd moments that bugged me. Survivors who are being portrayed as tough and smart folk occasionally do dumb things. For example:

1. When Henry and Cassie are on the rooftop, she doesn't close the door behind her. In fact, throughout the movie they frequently don't close doors or gates behind them despite the fact that its established that these zombies don't have the brains to open stuff up. My god, they didn't even close the gate behind them in the "Safe for Humans" compounds at the school they find. Why???

2. Why would Julien (Johnny Pacar) not think to open the porta-potty with caution? WHY???

3. I was unclear in the opening monologue explaining how things degenerated so quickly as to just why the govenment thought detonating EMPs over the continental US to black out electronics was a good way to contain zombies. This made no sense at all.

4. At one point when they meet up with the archers, it is stated that everyone should recover their arrows when they can. A minute later they plug three zombies with arrows that they then run right on by with no immediate hurry...and leave the arrows. Argh. 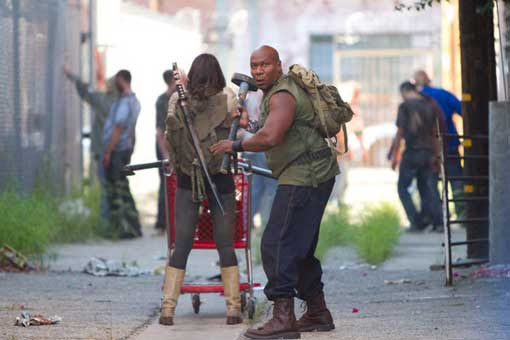 There are many little moments in this movie that are added purely for flavor and interesting detail, and I really liked that the time was taken to include these moments. The dog which followed the group early on, for example...or the space station/satellite/who-knows-what burning up in orbit. Julien's diary obsession, or Cassie's tale of her husband. Little details like this are important to a film which needs to carry on the weight of minor things. I also appreciated that the movie didn't take the easy route and follow other films with depictions of "man as the worst monster," focusing instead on the idea that here, in this apocalypse, the zombies make whatever is left of humanity all allies.

This movie tries hard to play it straight and tell a traditional survival horror tale. I think it succeeds, within its own limits, and in some ways exceeds expectations, especially for being a SyFy production. I may have to pay attention to more SyFy films in the future, as its possible there are some other rough hidden gems out there I haven't seen.

It's not a masterpiece by any stretch, and a better director with a bigger budget could have made this shine, but it's still a gem in the rough. I give it a solid B. Best kind!