Aside from Resident Evil I'm a big Silent Hill fan. I thought about doing an overview but then decided that it would be more fun to look first at the original that started it all.

Silent Hill started on the Playstation One as a horror game much in the same style and feel of Resident Evil, but with a murky plot in which you are Harry Mason, an otherwise ordinary fellow it would seem, who loses his daughter after he nearly runs off the road while swerving to avoid a little girl. After county officer Cybil Bennett find him, Harry realizes he needs to find his daughter in the nearby mist-shrouded town of Silent Hill.

Naturally, after a qausi-dreamlike event in which Harry is ripped apart by demonic child-things he finds himself in the inexplicably abandoned town, and begins his search. As he does, reality seems to twist and fold, as he finds himself shunted in and out of the dreamlike purgatory that overlaps with Silent Hill in an effort to find his daughter Cheryl and figure out how she is connected to another mysterious girl who seems to haunt the town. Amidst all this truly malevolent and disturbing monsters (well, for the time this came out they were disturbing, anyway) haunt the town, and make like very difficult for Harry.

Ultimately the storyline proves to be fairly complicated, involving an ancient god, a young vessel, and a soul split in two, with the threat of reincarnation/rebirth forcing the ancient evil to manifest and....well, the game has multiple endings, and the what/why/how of it all can vary quite a bit depending on how well you fare in playing through.

Silent Hill's design was effective and easy enough for the time it came out, though the pre-analog controls are frustrating now. It was notable for its time in that it employed "realistic" character management; you can get winded after sprinting, for example, or take damage that impacts your character's behavior. Later games would expand upon this and make it eponymous with the series trying hard to distinguish it's protagonist as more realistic, in contrast with most video game portrayala.

Silent Hill was the first truly good horror game to come out on the Playstation One, barring Resident Evil, which despite being the first survival horror game was still infused with a bit of the action and adventure element; you could get scared or surprised with shock while playing Resident Evil, sure; but Silent Hill, when it was new, could disturb and frighten you on a much deeper level. It's almost infamous for its imagery, mood, ambient noise and foreboding. There's always a suspicion that something is "not quite right" both in the town and with those trapped there, including Harry. Later games expand greatly upon this and to great effect (especially Silent hill 2, which managed to exceed the high bar the first one set).

Silent Hill today is available on the Playstation network for download (I replayed it on a PSP but theoretically it might be playable on the PS Vita or PS3, I imagine). It's an A+++ game by all rights,  and if you are willing to overlook the dated control scheme and graphics its still better than most horror games out there (and most Silent Hill games after #2, as well). 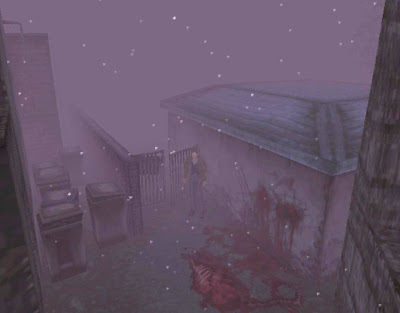 Posted by Doctor Futurity at 6:05 AM