Thirty One Days of Horror: Monsters 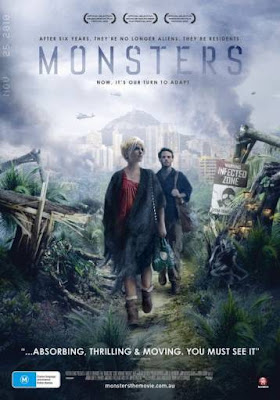 I'm about 48 minutes into this movie when a monster finally shows up, in the flesh, and not hinted at in some newscast...it's a good thing, too, because the last time we actually saw one it was the opener to the film, with a brief image of a large floating daikaiju-sized cephalopod monster getting hit by a tactical missile strike. With a name like Monsters you'd expect more...monsters, yeah?

Monsters was a 2010 film that I decided to skip in the theaters after it received lukewarm reviews. Now, available in all its glory on Netflix in the middle of my horror movie marathon, it seemed like a shoe-in for reviewing. The movie features the story of two people trapped in the middle of southern Mexico and trying to make good an escape. One is Samantha Wynden (Whitney Able), daughter of the man who owns the media empire that Andrew Caulder (Scoot McNairy) works for. Andrew's down trying to secure some hard footage of the mysterious alien monsters, giant floating cephalopods which have invaded much of Central America in a region now known as the "infection zone." He's derailed when his boss, Samantha's father, orders him to find her and get her home. She's on a walkabout of sorts....apparently having chosen the incredibly dangerous region where an alien invasion is underway to think hard about her future marriage plans (or something).

Monsters' monsters aren't really invaders, though. They're more like what rabbits were to Australia, or the tumbleweed was to the American Southwest....foreign visitors introduced, unchecked, into an environment ill-equipped to deal with them. The giant cephalopods grow and thrive in Central America, and apparently this has been happening for six or so years, as the giant beasts (brought back by a NASA probe in some vague fashion hinted at in a news report and a bit of text in the prologue) play cat and mouse with the US and Mexican military.

That all sounds really cool, right? Well unfortunately its a great setup but the follow-through is really, really slow. Most of the first forty five minutes of the film is a sort of travelogue, focused on life for two American tourists trying to get out of a strife-torn region of Central America. It could just as easily have dealt with a guerrilla uprising for all one knew, and only the occasional sign of "infected zone" or periodic newscasts with footage of the military fighting giant flying octopi suggest otherwise. It also tries to be a sort of "two strangers cast together might fall in love" story but really falls flat on its love story ass for a variety of reasons.

Ignoring the fact that the aliens don't really, truly show up in a meaningful way until an hour into the film, this movie's slow, methodical pace is punctuated by some beautiful scenery of the Yucatan region, and in terms of travel films its actually really quite good, if you are willing to overlook the sci-fi survival horror injected sporadically into the movie.

Scoot McNairy has something going for him, too. Throughout the movie I kept feeling like I was watching a movie with David Duchovny in it, because Scoot is a dead-wringer for his voice. This actually was critical to my ability to slog through this movie, as it was so unbelievably slow at times that only by imagining this as some sort of stealth X-Files riff could I find the energy to enjoy it.

Monsters makes a big mistake, probably a necessary one I imagine as it seems to me this film was overly ambitious for whatever budget it had: it adopts the fairly common technique of trying to make the extraordinary seem plausible through underplaying everything. By trying to make the story slower, the reactions of people more muted and less dramatic, the presentation ultimately nothing more than a travelogue of two people in a very screwed up place, it attempted to invoke a sense that this could, indeed be happening, or could at least happen in the way depicted. But for some reason it just doesn't manage to pull it off. Other films (i.e. District 9) did the same thing masterfully.

Somehow, for such a gorgeous and technically proficient film Monsters feels just sort of...lifeless. Still a better film than some of the abyssmal 80's dreck I've been watching, but it really could have used a bit more....pacing, and story, I suppose; and maybe two characters who were just a bit more interesting; the movie rides on their stories, their performances....and that just didn't cut it, unfortunately.

If you survive to the very end, around the 1:24 mark in the film (the tail end) it suddenly gets really, really interesting, providing a tantalizing hint of how much more it could have been. It's too little, too late....and mostly just a hint of what sort of movie Monsters could have been (hint: not a sci fi horror flick, maybe something more akin to real sci fi, a Jurassic Park meets Avatar deal, perhaps) but did make me wonder if someone down the road might not see this, realize the same, and then try to it all right next time.

This movie hovers around a C+ for effort and despite being a very slow travelogue/love story mischaracterized as a monster movie, jumping to an A in the last few minutes with the tantalizing suggestion of so much more about the actual monsters that we never got to see.