Thirty One Days of Horror: H.P. Lovecraft's The Tomb 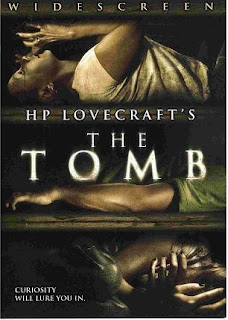 In the course of watching various films I stumbled across a few so unbelievably bad, so painfully discordant, that they deserve nothing more than to be buried in obscurity. The Tomb (2007) is one of those. Don't confuse it with another movie released recently of the same name, or yet another film by the same name yet to be released in 2013. Those might actually be good films for all I know.

Where to begin? The first disappointment is that this movie, despite the name, is not in fact an attempt at adapting Lovecraft's earliest work to film, and instead appears to be a low-budget, poorly acted rip-off of the Saw franchise. There's a vague effort to tie it all to Lovecraft by naming the serial torturer Charles Dexter Ward and suggesting he is intimately familiar with or otherwise influenced by Lovecraft's writings....but it's a pity the director and writer Ulli Lommel himself wasn't more familiar with Lovecraft, because if he was he could have actually tried to make this movie tie in a bit better to Lovecraft's fiction, or even its feel and mood. As it stands this is a cheap attempt to cash in on the author's name while making a substandard serial killer/torture flick that has a plodding pace, subpar special effects, and an almost painfully botched "plot" if you want to call it that.

This film is so bad that had Uwe Boll made it that would have been an improvement.

I was looking at Ulli Lommel's list of film credits and he's actually behind a lot of odd films, especially serial killer themed movies. This one is far from his earliest work, yet it feels like the kind of garbage that comes of an earnest effort by film school students to produce something that feels bigger than its limited budget and the modest collective experience of the people behind the film.

Actually, it's even worse. This movie is worse than many of the Lovecraft-inspired low budget fan films made by LARPers who have confused role-playing talent for actual acting skills. Yes, that bad. Seriously.

The film's ending is a sort of unique topper to this pile of steaming film. I can't recall having such a painfully bad ending in....damn. I guess I don't usually watch really bad movies all the way to the end that often. This entire movie feels like it was made by someone who has a very loose correlation between their idea of dramatic or horrific tale and anything the real world might consider in the least bit intelligent.

I can think of one nice thing to say about this movie: it has a suitably spooky soundtrack at a couple spots. Other than that....nope. This film has no other redeeming qualities.

The Tomb gets a very large F! Take the time instead to go read Lovecraft's original tale of a young man who appears to have a reincarnated relationship with a wicked, evil clan from the past, and his strange obsession with their family tomb. Maybe someday someone will realize that the story contains within it a perfectly decent adaptation into a short film, or even longer if you decide to extrapolate a bit.

Now excuse me while I go watch something....anything!.....I can find better to scrub this garbage from my brain. Agggh!