Thirty One Days of Horror: The Reeds

I finished this movie despite my better judgement to demonstrate a review of a genuinely poor film. The Reeds is a 2010 After Dark Horror Film special, which is to say a low budget, albeit better-than-cheap-indie quality film filled with no-name actors. It's definitely a technically proficient film. It has a few problems though, chiefly in the realm of coherence, relevance, and a significant dose of the "who cares?" department of film making.

Before Cabin in the Woods came out, this was the sort of film I'd call "urban hipsters vs. the wilderness" horror, the kind of horror that has completely taken over the genre in the last decade. I remember just a few decades ago when most horror films focused on teenagers getting killed while doing bad things or families about to undergo a traumatic event which was designed to tug at the primordial fear of protecting your loved ones from harm. The occasional odd film would break this mold, and those were usually the good ones.

Today most horror films dial it in with a plot that works out like this: group of young twenty-something hipsters are going out of the safe, comforting city for a weekend of fun, usually on a remote trip to somewhere just far enough away from the city limits that you know they are destined  for doom. Something awaits them when they arrive, and the slaughter begins. This is a very common trope in horror films now. It's practically overriden all the previous tropes we used to know. It's so common that Cabin in the Woods came along to do something about it.

Seen it yet? I may have spoilers for Cabin in the Woods. I may have them for The Reeds, too, but this film was awful and no one should care. Cabin however deserves to be seen before being spoiled.

The Reeds looks on the surface to be a confusing, muddy film about a group of friends from London who go out to the bogs for a weekend boat trip. They get lost, odd things happen, and before you know it they are dying in strange and often confusingly nonsensical ways while the movie spends most of its time throwing a confusing array of images at us, intending to think it is cleverly misleading us into guessing its threat is a madman, bog-people hillbillies, a monster, zombies, cannibals, godawful misfortune, or haunting spirits (spoiler: it's ghosts). But its really about England making sure that that particular Old One doesn't wake up, by making sure that tha jock, the scholar, the virgin and the whore all get it in the end. And sure enough it looks like they do.

Thank you Cabin for making this muddled film slightly more entertaining. My rating stands: D- if you watch it without seeing Cabin in the Woods. A grudging C+ if you have, and only because the Cabin-verse is designed to magically take a sucky, recycled plot poorly told and make it all fit into the bigger picture, warts and all. 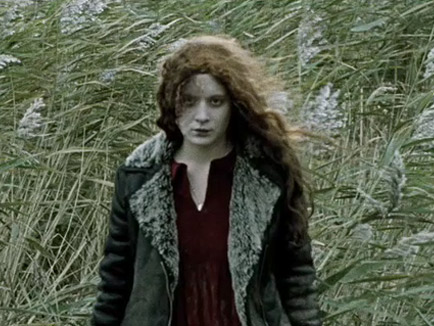 You know, I ought to do a proper review of Cabin in the Woods. That movie single-handedly made a metric ton of bad movies more fun to watch. Maybe for Halloween proper.
Posted by Doctor Futurity at 6:00 AM