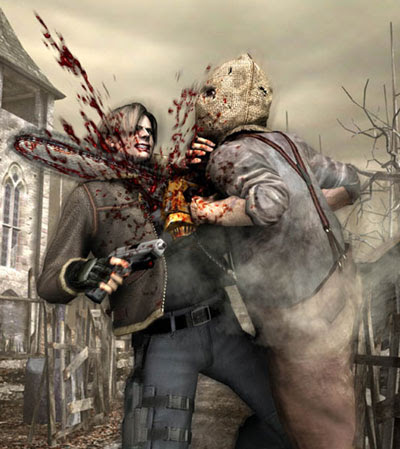 Resident Evil 4 was the game which jumped ship on zombies, trading in for the sexier, weirder and more Cthulhuesque Las Plagas and the creepy rural Spanish villagers called the las ganados. RE4 was significant for a number of other reasons as well, including the way the game plays and feels.

RE4 heralds a shift in the series from events surrounding 1998 and the spin-off events centered around what happened at Raccoon City and Umbrella Corp. to more modern focus on survivors from that event, now employed as special agents of the U.N. (iirc) specializing in unusual situations which may or may not also involve horrendous monster-generating biochemical weapons. In RE4 the hero is Leon Kennedy, former cop from Resident Evil 2, who is sent into to a remote European town (implied to be somewhere in rural Spain) to rescue the president's daughter, who has been kidnapped by cultists of a group known as the Los Illuminados.

The game fundamentally changed the core dynamic of how Resident Evil plays and feels. This was a necessary change; the franchise had lagged behind other titles in the genre and both it and Silent Hill were the only two persistent survival horror franchises left that were employing this technique (which people grudgingly put up with). RE4 managed to pull it off fairly successfully, although other more subtle changes would herald a shift from "survival horror" to "action horror" over the course of the game. This would have unfortunate side effects for Resident Evil 5 (and RE6 by the look of it), but the shift in RE4 was subtle enough to blend well with the more traditional feel and focus of the series.

Moving the series from a focus on T-virus generated zombies and monsters to the mysterious Las Plagas was a smart move, although arguably this choice came right as zombies were about to bust out of their niche corner into a multimedia phenomenon (and RE6 is getting back to ordinary zombies, it seems). The plot also shifts focus (slightly) from evil corporate warmongering to weird cultists an dterrorists using the detritus of Umbrella Corp. to create a new army of evil.


RE4's biggest issues boil down to three things for me:

First, a fair percentage of the game is spent hauling the president's daughter around. This, as you might guess, is effectively a lengthy escort mission. It is sometimes very painful dealing with subpar AI that likes to take some bullets for the monsters as she is prone to getting in your way, often. She likes to die, a bit too much.

Second, what the hell is up with the weird gun dealer who follows you everywhere? I grew increasingly dismayed that Leon Kennedy didn't simply grab the guy and make him lead Leon through the secret maze of easy-access tunnels that was obviously present, because there is no other way this guy could have gotten ahead of Leon without having either a master key set or an intimate familiarity with all the other secret byways that no one else obviously knew about. Also, why the hell was he there in the first place? This bit felt to me like the sort of thing a Japanese script-writer would include in the plot as a necessary but believable gimmick if you come from Japan and think that Europe is rife with remote, inaccessible locations filled with evil cultists and craft gun runners.

Third and most obnoxiously, the game starts to shift more to action events that feel more like the game developers were aiming for cinematic film than gameplay. This led to two problems: the tighter and more maneagable controls were still inadequate for a lot of actions (the age-old problem of third-person controls requiring almost inhuman levels of precision at times) and the introduction of quick-time events (QTEs for those of you who don't read a lot of gaming sites). QTEs are painful ways of making a player feel like he's engaged in a cut-scene. No they aren't. They are painful ways of taking a cut scene and forcing the player to hit random buttons unexpectedly. Do game developers not realize that the cut scene is supposed to be a reward, where you can take a moment to breath and relax, watch some cool story bit, then limber up for some more action? When the game suddenly demands I start tapping a button furiously, or a combination of such, I don't come away elated or satisfied that I dodged the boulder, ducked under the monster's feet and shot it from behind...I feel annoyed that I had to tap B, then X, then Y repeatedly and sometimes for many, many retries before getting it right. I can't pass this point by skill, so why make me play a weird little "Simon Says" minigame instead? Can't I just watch a damned cut scene in peace???

Griping aside, Resident Evil 4 is a fun game, and a worthy successor to the franchise. It demnstrated that Capcom could grow beyond its initial scope on the series, and still tell a weird and convoluted horror tale. The survival horror elements are all still here, and the game feels more modern. I found my frustrations detracted from the experience only a bit, so I'd rate this as an A-.

And then Resident Evil 5 came along..... 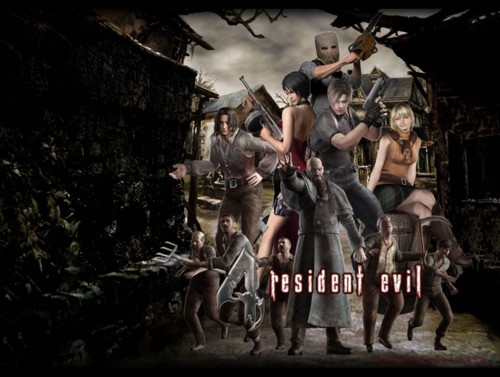