Thirty One Days of Horror: The Horde

To purge my mind of The Reeds I must speak of another great zombie film, one which spins out of France on a tidal-wave of exotic inventiveness and clever use of a single location and some extremely well-done fast zombies.

The Horde focuses on the conflict brewing between a group of rogue cops led by detective Mathias Rivoallan, determined to exact justice on a criminal gang leader named Markudi and his psychotic mixed-bag gang of Nigerians and Russians. The cops are a rough lot, and not in the least bit noble. The criminals are violent psychopaths and played over-the-top throughout the film. All the action takes place in a run-down tenement building that looks like it needs to be condemned (and which also reminds me of very similar buildings seen in several other films of similar nature). The movie is a showcase of violence out of control, and to add a twist to it all the conflict between cop and con happens right when a zombie apocalypse erupts. 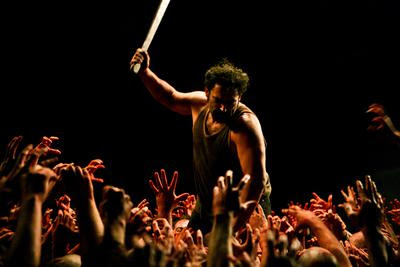 The plot is dirt simple: two opposing forces need to learn to survive a particularly virulent zombie apocalypse that spawns very fast and deadly undead. These are not shambling Romeroverse zombies; these guys are actually faster and deadlier than most running zombie films tend to show them.

In the end its the toughest and the best that survive to the finish, which is escape from the tower building and an introduction to the wider world of post-zombie France outside. There's not a lot of plot beyond that...but its a fantastic ride from start to finish.

One thing I loved about this movie were the eccentric and disturbing tenants of the building. Is this movie just trying to be over-the-top, or are there really some complete shit holes in France packed with exotic and well-armed characters, poised and ready for the apocalypse?

Check it out. This is a Grade A must-see zombie flick, one of the better ones in Death Bat's collection. The images I've attached don't lie; this movie's packed to the gill with the living dead and they are hungry and deadly! 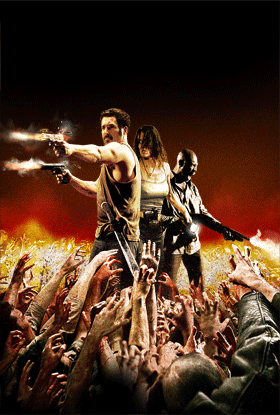