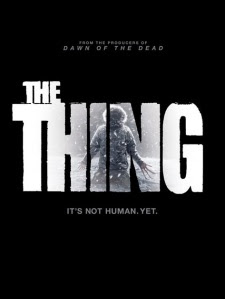 When The Thing premiered in theaters last year I was busy providing the husband-support role to my wife who was expected to give birth any second, and the idea of starting labor while in a theater or at a fine restaurant was always in the back of our minds. It was our first pregnancy, so we didn't know what to expect. As it turns out Marcus held out for a good month plus, but that did mean we avoided being out in public places for too long, especially theaters. Thus, I did not get to see the prequel to the movie that I generally regard as my favorite film of all time.

On the venn diagram* of horror and SF John Carpenter's The Thing is nestled square in the middle where horror and science fiction overlap. It is arguably the very definition of where these two meet, a sort of apex from which all other media cascades, and only Alien rightfully deserves a spot one step up from it. I, like many others who appreciate this genre, were skeptical that a new movie in the universe of The Thing, despite being something we've all wanted for going on thirty years now, was unlikely to be worthy. For one thing: Kurt Russell is a lot older than he was in 1982. For another thing, any sequel at this point wasn't going to have that special John Carpenter "something" that made so many fantastic movies in my youth.

The new film was written by Eric Heisserer and credits Jown W. Campbell's "Who Goes There?" as its source, although technically the movie is an immediate prequel to the original film, and thus both movies are inspired by the same novella. Campbell's original story also inspired a 1951 film, "The Thing from another World," which was a bit looser in its interpretation of the story (though still worth watching for fans of vintage sci fi). The main protagonist of this film is Kate Lloyd (Mary Elizabeth Winstead), a demure paleontologist with access to some very impressive fiber optic equipment for 1982 when she is first introduced. Kate is approached by Dr. Sander Halvorson, a rather righteous and indignant fellow who needs her to help extract something for him down in Antarctica. Yes, it seems the Norwegian research station in Antarctica got the word out that they have found something unusual.

The story moves from there to a fairly familiar retelling (or pre-telling) of the events that are hinted at in the original film, as we see just how the Norwegian station went from "find of the millennium" to dead Norwegians everywhere and a couple guys in a helicopter trying to kill a seemingly innocent dog.

In fact, the film does a remarkably good job of faithfully matching what happens in this film to the horrific detritus that is found in the original movie. I watched them back to back in chronological sequence, and it was actually very smooth, with only one "glitch" I was noticing, and even then it turns out that they had accounted for that. In fact they accounted for things I didn't even remember....and I've seen the original movie at least once a year for thirty years now (it's one of the few movies I watch every Halloween religiously).

The axe buried in the wall and covered in blood.
The dead guy who slit his own throat (or was murdered).
The reason the storage area with the huge block of ice is in shambles (and how they extracted the Thing so neatly from the ice....or a least, how it got like that).
The twisted two-faced burned Thing body out front that MacReady and Doc haul back to their base in the original film.
The way that the space ship was exposed in its pit of ice (hint: it's not like the original implication that the Norwegians blew it up intentionally....this was the one bit I thought they messed up on, but when you watch the two in sequence it makes sense).
Exactly who the two guys in the helicopter were and of course why they were chasing the dog. 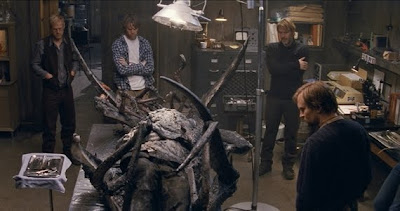 The movie does a competent job of building suspense and portaying the horrific events the Norwegians go through from start to finish. It's got a bounty of characters, most of whom are barely distinguishable from one another, unfortunately, although maybe if I was more in tune with Norwegian cinema I might be more familiar with some these actors. Unfortunately the film suffers for this a bit because while all the actors here are competent, there's no way they could hold up to the range of distinct actors that the original film showcased, and Carpenter's unique style with which he managed to portray the distinct personalities of each on film using subtle but effective "show don't tell" techniques.

The movie is also hampered a bit by the meticulous attention to detail that it engages in as a prequel. While it is fantastic to see every last gory inch of Norwegian base migrate from functional and healthy to frozen and gory exactly as it was in the original film, the transition necessarily means that they had to write a script which conformed to these boundaries. A useful exercise in highly structured storytelling, but of necessity limiting the creative freedom of the script writer. It also means that some of the tension so effective in the original film is simply missing here. These people trust each other a bit too much, through most of the film. Except Lars. Lars kicked ass.

The movie's creators did seem to realize that they needed some unique elements to their film beyond the faithful recreation of carnage. There's a few twists worth mentioning, which stand out (real spoilers here). Dr. Lloyd figures out an interesting way to detect a Thing which was not revealed in the original film but makes perfect sense here: when the thing replicates you, it remakes you perfectly, which means artificial imperfections (like tooth fillings) get pushed out. Later, the film indulges in a bit of exploration in the actual spacecraft itself, something that many of us wondered about from the original movie (which left the question unanswered on whether there was enough of the ship left to explore after it was blown up). I think the movie failed slightly here; for such a macabre quasi-Lovecraftian creature as the Thing, the ship was surprisingly mundane (even the Predator vessel from Predator 2 was more exotic). But hey, we get to find out exactly how they blew it up. Hint: the scene in the original from the Nordic video tapes of them planting charges....those were likely charges used to free up the ice block which contained the Thing itself, and not (as was originally intended) the charges used to free the ship from the ice.

One Fridge Logic moment: if the ship was functional enough to fire up and potentially even take off, then why was the Thing stranded in the first place? Maybe it was pilfering parts from the base to fix the vessel? What on earth could be useful to it to repair a starship, anyway? Probably the same stuff it was using to make the escape craft in the original, I guess (which I'll talk more about next review).

Watching these two movies back to back worked well, and made me appreciate how seamless the transition from one film to the next was. You feel a bit like you're watching one complete story, in which somewhere out there is Kate Lloyd, all by herself in a tractor, trying to make it to the nearest safe spot (and probably failing, unless they make a sequel) in a universe where a young Kurt Russel and Keith David could actually meet with her to make a third Thing movie.

Fun Fact! This was Keith David's third movie and the one which I think kickstarted his career. You may know him better as Captain Anderson in Mass Effect.

I really did enjoy this movie even if it lacked that extra special touch that made the original so staggeringly good. I'll give this one a big fat A. I watched on the same night as Pandorum...it was a good night for horror sci fi! 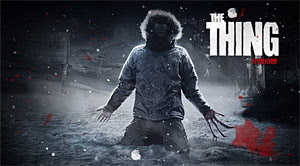 *On Blogtopia and forumland these days I noticed it is important and very hip, apparently, to refer to venn diagrams without ever demonstrating them.

Posted by Doctor Futurity at 8:46 AM

Email ThisBlogThis!Share to TwitterShare to FacebookShare to Pinterest
Labels: horror, movies, reviews, the thing, who goes there