Thirty One Days of Horror: Suck

Horror is pretty broad as genres go; you can fit a lot under the label, and have a lot of crossover with other genres at the same time. And then there are vampire films.

Most vampire films tend not to feel so much like horror films in any conventional sense; after a certain point (the post-Anne Rice, post White Wolf era of vampire tales) they shift from more conventional horror (Fright Night, Near Dark) into something else entirely. Films like the Interview with a Vampire series, Underworld and others I dare not invoke by name tend to revolve around vampires as protagonists or anti-heroes. There may be horror in these films, but it's often the horror instigated by the protagonist, or maybe horror at their own condition (if the film is done right....at least according to my sensibilities).

Then there's Suck. Suck was a 2009 release with some big names attached to it, including Malcom McDowell as Eddie van Helsing, Jessica Pare as the main protagonist (also named Jessica), Henry RRollins, Iggy Pop and even Alice Cooper appears as an evil vampiric bartender. With sort of lineup the film could cruise along and still manage to do well....luckily for us writer and director Rob Stefaniuk turns this movie into something genuinely awesome, at once hillariously campy and over the top with both comedy and horror.

The short version of the plot: Jessica and her band "The Winners" are trying to make it big with their music when during a visit to Montreal Jessica hooks up after the show with an admirer named Queeny....a genuinely creepy fellow who, naturally, is a vampire. The band thinks Jessica has ditched them so off they go to their next gig, until Jessica mysteriously shows up, looking a little....different. Her newfound undead magnetism woos the crowd and the band starts to get popular. 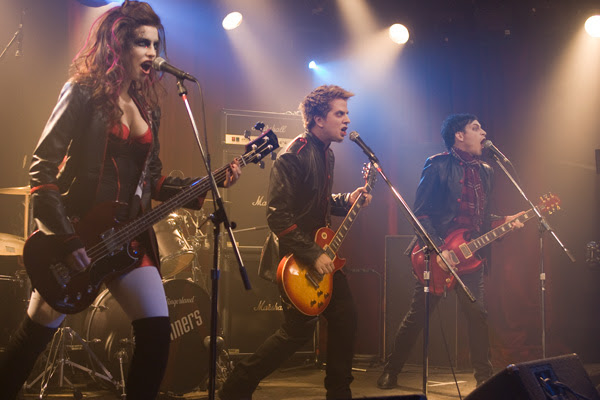 Before too long things spiral out of control. It looks like the secret to musical success lies in the charisma of undeath, and the band's escalating success, along with the unfortunate appetites of Jessica, send them down a one-way trip to vampiric mayhem. Amidst all this there are a few slight problems, not the least of which is Eddie van Helsing, descendant of the late van Helsing, vampire hunter, who is still carrying out the duties of his family legacy.

This movie has loads of cameos from rockstars, a fantastically weird take on the entire vampire subgenre, and pretty much every actor in the film provides a top-notch thoroughly hammed-up performance. Jessica Pare is awesome in her lead role, and she handles the slow, certain descent into vampiric hunger with perfection. Five awesome bits about this movie:

1. Alice Cooper as the bartender and...well....let's just say he shows up in a truly fitting role at the very end.

2. The over-the-top performances, enhanced by the natural showmanship of vampirism, are entertainingly mesmerizing.

3. Iggy Pop as a sort of "vampire fixer?" Awesome.

4. Eddie van Helsing (McDowell) hams it up as the doddering old hunter.

5. Amazing soundtrack as good as its rock star lineup.

Suck is on my short list of A+ films. If you like to dabble in a good dose of horror and comedy on occasion, you must not miss this one!