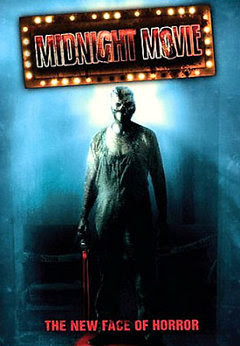 I have a real thing for the idea of haunted films. There are a few good books out there that touch on the idea (or run full tilt with it) including Joe Lansdale's Drive-In trilogy and Greg Kihn's Horror Show, which I read on a stormy night in Long Beach, Washington and it scared the jezeesus out of me, which is a testament to its quality if ever there was! There's also a decent compendium of short stories called Midnight Premiere, which was edited by Tom Piccirilli himself, so you know they're  good.

Midnight Movie falls into this vein, a tale about a haunted film. Specifically, its a haunted production of a late-60's horror movie, and the film's creator went mad and was locked away in an insane asylum. It's never entirely clear to me if the film itself was the cause of his madness, a byproduct of it, or representative of something else (i.e. he actually murdered the actors in the original film or something). The important thing is that a careless doctor decides to indulge the director with a viewing of the movie on Halloween night for some seriously medical-malpractice-worthy reason. This motivates the madman to break free of his bonds, bite his wrists open, and use the blood to invoke a spell that somehow either transposes his evil spirit into the film or brings his ghoulish serial killer to life. The net result is the same: an asylum full of dead people, evidence of an occult ritual, and a detective obsessed with the truth.

Cut to five years later and a local theater has a copy of the film it intends to play for a midnight showing on Halloween in a quiet little town. The usual cast of oddball teens and locals assemble for the late night viewing, to be treated to a schlocky black and white horror film about a skull-masked madman who uses a curious twisting corkscrew blade to gouge his victims to death. As the van full of carefree hippies in the movie are methodically murdered, things get weird as it is soon evident that the killer is somehow jumping from the film to reality and killing people in the real world, too. Panic ensues, and the body count mounts precipitously. No one, of course, is safe, even when the movie tempts you to think so.

The movie carries on as most slasher flicks do, this one focused on its film-tethered supernatural ghoul who is relentless and unstoppable. The victims are surprisingly quick to accept the reality of their situation, and display a mild level of genre saviness, overwhelmed by the fact that they are all essentially caricatures destined for death, until toward the end a few survivors get the idea the monster is driven by its ability to sense fear. The girl Bridget (Rebekah Brandes) and her young brother Timmy (Justin Baric) both suffered serious abuse from their father and rely on their unfortunate conditioning to squelch their fear.....but to no avail, as they are ultimately dragged into the very film itself, where they discover all of the killer's victims in some sort of backwoods purgatory. In the end Bridget saves her brother when she realizes the credits are about to roll, but becomes trapped in the film as she does. The police at last arrive, and the film is confiscated as evidence, likely never to play again until the next low budget sequel, if there ever is one.

Midnight Movie is more slasher flick than anything else. It has the following notable features:

1. Ghoulish supernatural killer. He's ugly, he has a mask, and we never see his face. It's never clear if the ghoul is the actual incarnation of the film maker post-occult ritual or something else brought to unholy life.

2. Cabinverse* Friendly. It might be the "first" use of the artifact (thus the presence of the cop and therapist who come to watch the film of the madman that they never caught), but the scholar, the athlete, the whore and the virgin are all present (and then some) and everyone dies at the end, pretty much. The film reel is clearly the doom of choice. I would avoid seeing movies at that theater once every five years if I lived in the Cabinverse.

3. Slips into Hellraiser-style Purgatory. The last ten minutes switch the film from your usual supernatural slasher flick to something a bit more macabre and unusual, as it may indeed be the case that the ghoulish killer is trapped in his celluloid hell and he's pulling anyone he can into it. Shades of this special subgenre made popular by Hellraiser, Silent Hill and the Kult RPG.

4. Everyone is meant to die. The film does a decent job of occasionally lulling you into believing some characters are meant to be the tough survivors, and then Bam! they're full of chunky holes.

5. Riduculously Dumb Killer Weapon. Though unique...I guess....the hand-driven "screw knife" seems like the sort of weapon only a supernatural ghoul could figure out how to effectively use.

I'll give this one a C because while it had its moments, the film by and large felt a bit by-the-numbers and didn't grab me like I would have liked it to. The last ten minutes of the film were the best; it needed a lot more of that, I think.

*My term for films which neatly fit inside the metaplot/setting of Cabin in the Woods.