Thirty One Days of Horror: Autumn 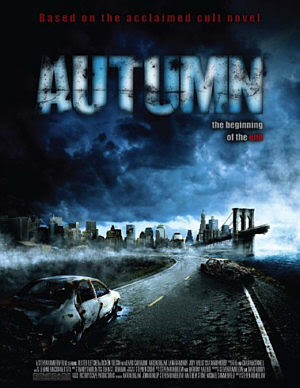 Thankfully I chose Autumn at random after the horrific disappointment that was The Tomb. Autumn is based on the novel of the same name by David Moody, and after seeing this film I plan to get the book, which appears to be part of a series. The movie introduced me to the novel and sold me on it all at once.

Here's the weird thing about Autumn: a fair number of people on Netflix gave it one or two stars, which is a travesty, although it says a lot about the nature of the zombie film audience, I guess. My opinion? This is a five star A+++ movie, and immediately became one of my favorite zombie horror films. I haven't watched a film that left me with such a sense of growing dread in a long time, nor have I enjoyed a film in the genre where I grew to care for the characters as much as I did here. That, to me, is impressive.

Autumn is very basic in its premise: a mysterious plague hits one day and wipes out the vast majority of the world population, who die in a matter of minutes. A handful of presumably immune survivors make their way to a shelter to cope with the immensity of the tragedy, but within a day or so the dead get back up, staggering around like automatons...nonthreatening automatons, mind you! These zombies are well and truly living up to their name.

As the story progresses a group of survivors head out, no longer content to stay cooped up in the shelter with everyone else, and concerned for the looming threat of disease and worse that will come from being in a city of several hundred thousand dead, rotting, walking corpses. They eventually find a cabin in the woods (heh) and set up base. Good enough, right? Wait out the dead, who are rotting, and survive the winter.

Things change however as it becomes evident that the zombies are learning, perhaps regenerating their senses and motor functions over time. Soon the evidence mounts that they are becoming more aggressive, as a pack of them hunt down first a dog and then later much worse. Bad things are about to happen.

Autumn earns immediate kudos for having a unique take on the zombie apocalypse. The idea of mindless corpses that slowly regenerate basic cognitive function and become a bigger threat over time is played well here, and helps greatly to enhance the slowly building sense of tension and menace throughout the film. For the first thirty five minutes or so I was growing conerned that this was a good albeit not overly exciting BBC special....you know, the kind where the English deal with an issue stoically while much time passes and nothing of interest happens? Yeah, it makes you think that and sets you up handily to really feel the impact when things finally start to disintegrate later on.

Also, the late David Carradine had a surprise appearance in this movie. How cool is that?!?!

A+ from the Death Bat, this is very possibly the best new movie I've watched so far this month! Do not take other reviewers at their word, and watch it yourself. Like I said, it seems like a lot of people had issues with this movie, and frankly I think they're out of their minds.