Thirty One Days of Horror: Resident Evil - The Movie 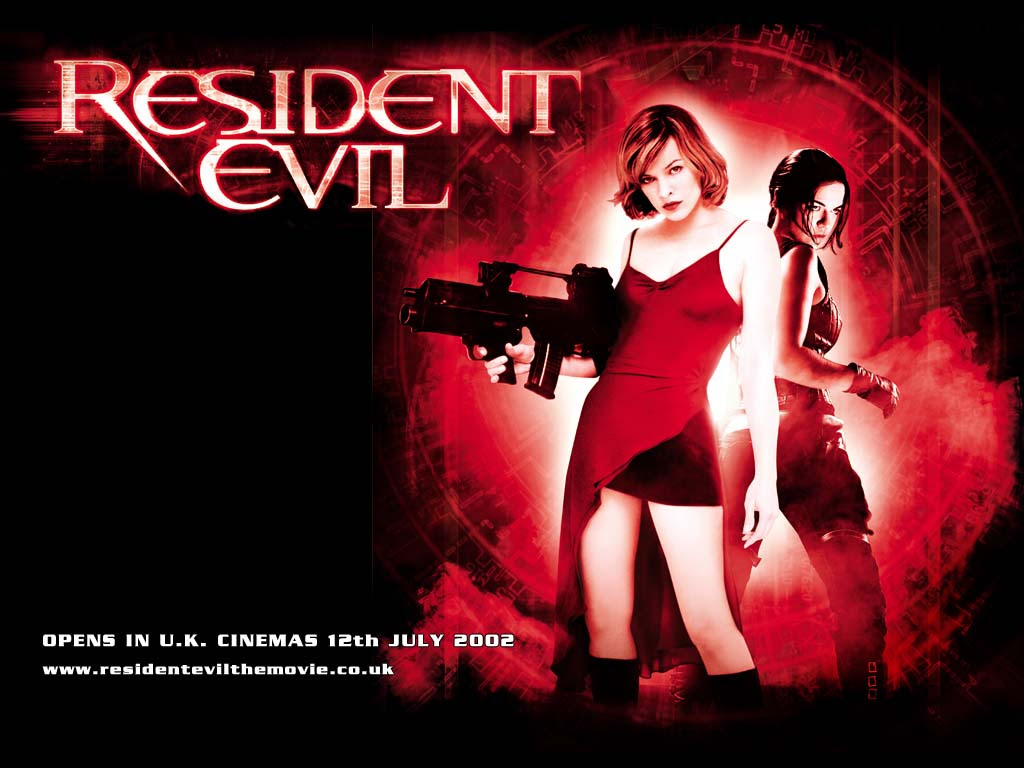 The first Resident Evil movie arrived in 2002, featuring Milla Jovovich as the lead character. As movies based on game franchises go it was pretty well done, but as anyone who’s sat through more than a few such adaptations can assert, being “better than normal” in this department is sort of like saying, “I’ve eaten plenty of bugs in my time, and as bugs go, this one’s pretty tasty.”

In the film’s defense it actually is pretty good, and unlike later sequels you can easily follow each component back to the source without too much effort. The movie focuses on a squad of Umbrella mercenaries who are sent in to investigate their immense subterranean lab beneath Raccoon City, where they’ve been experimenting with all sorts of unpleasant bio weapon research. Unlike the game, the movie focuses primarily on a cast of characters here to deal with what at first appears to be a rogue AI computer, and set pieces from the game like the mansion and underground subway are given a slight nod but aren’t even remotely as relevant in the movie. Even the zombies from Resident Evil are just one part of the movie’s focus, and not even the main one at that; the numerous high-tech traps of the “Red Queen” AI as well as the licker creature (a late-appearing foe in the first game) are given a great deal of focus.

In many ways this movie complements that game because it could, in theory, be depicting previously unseen elements of the massive and complex mess of plots that comprise the events of the game. Later entries into the game franchise (like RE: Operation Racoon City) even seem to take direct inspiration from the film while trying to meld its many elements together with the game’s. This in some ways makes this first film more significant. It’s possible, after all, that Milla Jovovich’s character Alice is actually a resident of the mansion (or another mansion….Umbrella has a lot of places like this, it seems), and the film follows the games in spirit by demonstrating a large underground Umbrella operation being present, although the demonstrated scope of this facility in the film seems to be far greater than anything the games imply or demonstrate.

If one ignores the fact that Hollywood has never, ever made a video game tie-in that was an accurate depiction of the source game, can it be possible for them to intentionally or accidentally get the thematic elements right? So going by my core criteria for Resident Evil as a game series from last time, how does the film stack up? Let’s See:

You can’t really have a “player” in a movie so this is an unfair comparison. However, you can have plenty of unpredictable or frightening moments in film, and you can punctuate these by building up a slow and methodical pace, then surprising the audience in ways they didn’t expect.

The movie does a fairly good job of attempting this, but fails in the sense that it doesn’t really capture the slow but suspenseful build-up that the original does. The movie tries to frame much of the experience through the eyes of Alice and her erstwhile ally who are both suffering memory loss, allowing them (in theory) to be as surprised as us when they discover things even though they worked for Umbrella. Likewise, the mercenaries seem to understand the sort of employer they work for yet are woefully unprepared for just what it is they might encounter. I give it a C.

There are some great moments in this film, with weird sets, moody and disturbing scenes of carnage, industrial equipment and machinery, weird labs and a wide range of such to boot. If you graded the movie a success on this element alone it does a pretty decent job. Unfortunately except for the mansion scenes and the underground railroad very little is directly inspired by the games. B+.

Actually I thought the movie did a pretty decent job here despite its large cast of cannon fodder. You start with a large number of characters, who quickly get whittled away. There are moments where the film engenders a decent sense of claustrophobia (you definitely feel like they’re deep underground) and I never saw anything that felt specifically like a set to me. On the other hand these are a gang of tough mercenaries and special agents; only the poor reporter guy stands out as someone who should be losing their cool in the midst of all this. With so many cast members running around, it’s hard to feel the isolation. I give it a C+.

So how would you go about expressing this theme in a film? Running out of bullets, taking a moment to demonstrate that people are running out of resources, or emphasizing when they do find them. It’s not really a “thing” in the movie, which frames events in a very short time span (I’d have to say that the length of time that passes in the film isn’t much more than a few hours). Hard to grade this, since it’s so specific to the game experience, but the movie could have made it stand out. There is one point where Michelle Rodriguez’s character mentions that they’re running out of bullets, I think. People often seem to run out of ammo in these movies, and usually respond by tossing their guns to the ground. Yeah….give it a C, I guess.

Well in one sense there’s plenty that remains unexplained in this movie. Enough to do four sequels, it would seem! But not all is obvious…as subsequent reviews shall demonstrate. Needless to say, the movies do attempt to keep plenty open, but mostly for purposes of framing the end of each film to open up for a sequel. In 2002 when this first came out it was a great cliffhanger, which felt like a decent conclusion to the movie and at the same time implying a future sequel.

In the context I intended, which is to say the idea within the games that there remained many unexplained puzzles and implied mysteries or tales yet to be told, the movies do a less than adequate job. The problem here is not even a matter of simply dropping hints or suggestions of things to come or events unseen; it’s a problem with film script writing in general, especially in the genre of action films where plot and exposition will always fall by the wayside. A side effect of this sort of film is the so called “fridge logic” moments, which if the film makers are very lucky transform into “fridge brilliance” moments instead. (I dare you to lose hours of your life looking these terms up on TVtropes).

A fridge logic moment happens when you think about a movie later on and realize some glaring plot holes. Fridge brilliance is when something less obvious suddenly stands out as especially impressive later on. Unfortunately Resident Evil’s first movie has a lot of the former and less of the later. It only gets worse….much, much worse…with later films. The saving grace will boil down to: how much can one overlook the problems inherent in these fridge logic moments, and assume that…at least in the implied universe of the RE movies….such deviations from logic are the norm?

Luckily for the first film there aren’t many…but what it does is set up the stage for the later films to violate logic…and canon…all over the place; but more about those later on. For now, I’ll just ask the following questions and rank this film with a B+ for effort:

How did that laser chamber trap work? Assuming it worked in any way like a conventional laser, what is that material the walls are made of, because if it’s glass then the laser ought to be slicing right through it and the metal framework everything is held up by. The only other explanation is that the laser source is being generated on the surface of the glass and metal frame….but that way lies madness. We’ll ignore the “gridded” trap for the moment, too.

The lickers were kept in crates in a large containment area. Okay, I can accept this. But if all these creatures are so virulent in their ability to transmit the virus, and there are crates full of them down there, why wouldn’t Umbrella have at least considered the risk, or briefed their team going in? By the second movie the only implication is the entire corporation is managed by psychotics who like to experiment with stuff for fun, but more on that later.

Also, why do we only see one licker escaping? The answer, of course, is “because we could only budget for one and a gaggle of them wouldn’t work in the framework of this movie,” and more do appear in the second film.

Umbrella’s Lack of Faith in the Red Queen

How come no one at Umbrella could speak with the Red Queen to ascertain what had happened? It was never adequately explained, as best I could tell, just why it was assumed that the Red Queen had gone psycho despite the fact that she seemed to be engaging in Umbrella-approved methods of containment (which included gassing the work staff and arming lethal traps). I mean…the Red Queen didn’t build these, right? She’s just in charge of making things happen as it should, a neutral and unbiased personality who’s willing to push the button when the tough decisions need to be made. So why didn’t Umbrella recognize this? My rationalization is that Umbrella is, for such a ridiculously evil, secret corporation with clear government backing, heavily compartmentalized to the point where whomever sent in the initial response team in this movie probably didn’t have a need-to-know, and by the time somebody with familiarity of the situation arrives (at the tail end of the movie) its mostly just to salvage what they can.

It’s a half-decent attempt at a video game film which manages to tell a story that, while highly deviant from the source, still feels like it “fits,” telling a side-tale that doesn’t entirely contradict the original game story, even if it also doesn’t precisely fit in a round hole/square peg sort of way. Worth seeing though, and taken on its own merits it’s a fun movie to watch even if you know nothing of the games. B+

Next: Resident Evil: Apocalypse in Review
Posted by Doctor Futurity at 6:00 AM