Thirty One Days of Horror: Terror Within 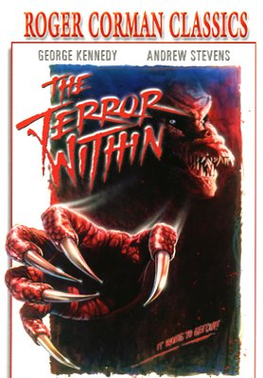 Here's the sort of movie I subscribe to Netflix for: some obscure, otherwise forgotten post-apocalyptic survival horror flick that I otherwise missed back in 1988 (and would probably have liked less then, anyway) just waiting for me to discover it for the first time. Like Leviathan that I reviewed earlier its a product of the 80's, and shows it. Unlike Leviathan, this movie was done on what looks like a shoestring budget and where Leviathan attempts for a fancy rip-off of The Thing and Alien, Terror Within aims instead to be the unholy love child of Alien and C.H.U.D.!

Since this movie is not high on my list of "amazing films" be warned that copious spoilers lie ahead!

Our tale opens in the Mojave desert, some undetermined time after a biological agent has decimated the world population and mutated the unlucky ones into hideous mutants referred to as gargoyles. Luckily the surviving employees at the Mojave Center for Disease Control subterranean labs (a complex no doubt built under contract by Umbrella Corp.) are boldly setting out to see what's left on the surface as their resources run low. Food type resources, that is. They seem to have all the hair care products and gel that they need....in the 80's, hair was always a priority. Always.

After the first two guys go missing with sound effects suggesting an untimely demise, two more agents are dispatched along with the adorable dog Butch to see what happened. They discover that the two previous agents are dead, as is a camp of survivors, much to their surprise. Then they stumble on a lone woman who lived through the massacre, it seems. They return with her to the base; she's the ray of hope that survival in the post-bioplague wasteland is possible!

What happens from here on out boils down to: "we wanted to do Alien, but we lacked the budget for a sci-fi blockbuster so we worked with what we had." The script, characters and even several situations are essentially pantomiming or otherwise ripping off Alien at every turn, but with that horribly cheesy eighties era TV-actor special style to it. They are so busy ripping of Alien, in fact, that they repeatedly miss opportunities to do their own thing and distinguish their film from the obvious source material, which is a shame.


The film plods along toward the inevitable conclusion, as they discover the survivor in the wastelands is pregnant, but the fetus seems to be growing at a rate of days instead of months. They decide to operate and remove the fetus, but it's too late and the little monster escapes. As you may expect the only thing more impressive than its two day gestation period is it's enormously efficient metabolism and the baby gargoyle mutant is a large, lumbering rubber suit adult in a matter of hours.

The group makes improvised weapons, including a flamethrower, crossbow and some lasers that look suspiciously like either nail guns or some pvc tubing and the hunt is on! If you've seen Alien you've already seen how this movie goes, except much, much better and with more thought put into it. If you still want to know, read on.

Long story short, the mutant wants women, and it grabs one of the CDC employees and has its way with her. The crew dies slowly but surely while trying to kill it, and eventually we're down to two survivors (a Hasselhoff wanna be and the good lady doctor) plus the rascally dog Butch. Butch is the real star of the movie here, and even when he gets in a tangle with the mutant he lives. Butch is a horrible dog actor, but he makes up for it by being adorable.

Eventually the two final survivors (note that I feel no compulsion to restart this movie just to remember what their names are) have a final confrontation with the mutant and manage to grind it up in a large fan blade. Then another base finally contacts them and they feel a ray of hope. We end with the trio leaving, blowing up the installation and a couple more rubber suit mutants up behind them.

Some of the more amusing moments in Terror Within include:

1. Bad Dog acting. Butch the dog is not terribly good at what he does, but he makes up for it by being so cute. Butch is to Mojave CDC Lab what Jones was to the Nostromo.

2. This is an underground lab, right? I guess it's secret because its entrance is an old prospector's shack in the middle of the desert, with no visible roads or means of reaching it. The lab itself is ambiguously large...which is to say, as large as the plot demands for it.

3. I liked we have two goofy tech/mechanic types, who precisely match the same roles of the two mechanics on the Nostromo. I like how one dies while dropping his cigarette in an eerily similar scene to the same event in Alien.

4. The mutant gargoyles in this movie suffer from the age-old rubber monster problem of "jaws and teeth too large and unwieldly to live with." How the hell do you eat, let alone bite, with a jaw like this thing has?

5. We don't need no stinkin' metaphors! This movie avoided the "alien as a metaphor for rape, sexual invasion, and pregnancy" and simply made it exactly that, with the mutants seeking to impregnate normal women with their infernal fast-growing spawn.

6. Aside from all that, this movie was shot in locations that look very much like where I grew up as a youth, so there was a pleasant sort of home-iness to it for me.

7. This film is filled with a delightful load of retrotech. There's even a spot where splicing a tape becomes a tension-filled moment! Yay for the retrofuture as envisioned by the past.

8. "What do we do now that we've killed it?" "I know! Let's leave our underground base, where the only technology that can broadcast a subsonic noise to drive the monsters away exists, and blow it all up because SCIENCE, bitches."

Seriously, I have no idea why they thought blowing up their base at the end was a good idea, other than because the Nostromo blew up so there ya' go.

Terror Within aspires to be Alien but with no budget, poor acting, an ill-conceived script, and styled hair that is far too good to be true in the post-apocalyptic landscape. Plus, this movie came out after other, better films like Predator and The Thing so it had no excuse. Still, it was fun to watch and might be even more entertaining with friends who like to rip bad movies apart. I'll give it a solid D, with the caveat that I still found it enjoyable to watch, for a groan-fest of fun. But Butch the dog gets a B+, for being the best and cutest actor in the movie!