Yesterday I reviewed the newer movie that presented itself as an immediate prequel to John Carpenter's The Thing. Today, we return to the 1982 classic that stands out in my mind as the best horror/SF crossover (next to Alien) of all time.

What can be said about this movie that hasn't been said before? If you've somehow never seen The Thing go find it and watch it. Now. I'll wait, blog will be here when you return. You're in for a real treat: a film which managed to do poorly at the box office on release, but took off when it went to home video, and went from being a cult classic to a recognized top film in its special genre. Hell, it's just an awesome film all around.

Rather than gush endlessly about it, saying things we all know about anyway (at least if you, like me, watch this film at least once a year religiously ...I'm going to list eleven reasons that The Thing deserves accolades for one of the best horror films of all time. We'll do this list countdown style (in no special order):

11. Ennio Morricone did the fantastically moody soundtrack. This was an exception to the norm for Carpenter, who usually did his own soundtracks.

10. It's based on the excellent John W. Campbell story "Who Goes There?" and is a better spiritual adaptation than the first effort (Thing from Another World, 1952).

9. John Carpenter knows how to do characters really well for this sort of genre. This is important; the building tension and mistrust is easy to follow in this film, easy to see as it percolates to the surface precisely because these characters take on a life of their own with just a few well-done establishing scenes. No, you don't "care" for any of them....but you know who they are, and you can see both how and why they go from comrades doing a job to a mess of paranoid individuals who don't know who to trust.

8. The special effects in this movie were outstanding, most by Rob Bottin. The FX still stand up to the test of time, and in fact when you watch the prequel and compare it is clear that the CGI effects, while very realistic, lack the raw, glistening, bloody reality of what the original film offers. 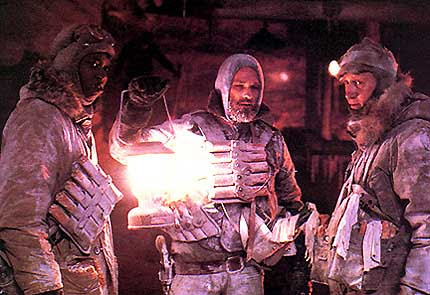 7. The film has a spiritual connection to Lovecraft's At the Mountains of Madness, for while it is not inherently aimed at Lovecraft, the principle of terrifying secrets and dangers to be unveiled beneath the Antarctic ice get their film realization here.

6. Adrienne Barbeau was in this film. She was! She voiced the chess computer.

5. Even watching this film 20+ times you can still have fun trying to figure out just when exactly the various victims of the thing were "changed."

4. Ask yourself why it was easier and more effective for the thing to design a small escape-saucer beneath the old shack, made from machine and helicopter parts. One might wonder why it didn't just...say....repair one of the helicopters, right? So what technology was next on the agenda for its creation? Loot the remnants of its ship? Or was the thing simply so advanced that simple helicopters were beyond its interest or understanding?

3. The Thing did get a prequel, of sorts. There was a video game in 2002 on the PS2 and Xbox. In the game sequel universe MacReady is alive and well and shows up at the very end to kill steal the super-thing boss. I suffered through this game being the Thing fan I am; it was a mixture of good ideas, poor implementation, and  crazy videogame logic, leaving one at once mildly satisfied to see a future take on what happened after the film and also disgusted that this sequel was delegated to a fair to middling computer game.

2. Childs is played by Keith David, who is of course known today as Mass Effect's Captain Anderson. Just about all the actors in this film are either known career actors or go on from here to develop a real career later on. There's almost no one in this film who isn't recognizable from other later works.

1. I loved that dog. How often anymore do you see such a disciplined dog on screen? It must have taken literally hours for them to get the dog/kennel/thing dog scene just right (the one where the Thing, disguised as a dog, is first put in the kennel). Seriously...it's pretty difficult to train a dog to squelch all the behavioral queues that come so naturally to canines in general. This extra bit made the dog that much more believable as being "something else." 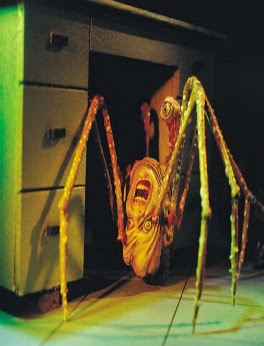