I conceived of Savage Metal after a stint with the Metabarons, Incal and other comics set in the dark future universe of French graphic novelist Alejandro Jodorowsky. It's good stuff....I've never quite recovered from the concept of the necro dream and all it implies in this wasted, worn future universe.

Anyway, the thought of running a campaign that looked, felt and smelled like just such a future universe, springing off the pages of Heavy Metal itself, seemed kind of like a neat idea. I worked out a premise or theme, if you will, but never got past that point. I figured I'd present the original concept article here, for fun...who knows, maybe I'll try to develop it into something solid in the future. Savage Worlds is a great system for this kind of setting, I think.

The Hard-Rock Far-Future Guns ’n Guts Campaign Setting for Traveller, Savage Worlds, or any other system that you think can handle it…

Introduction:
The future is dirty, riddled with bullet holes, and strewn with the trash of countless ages. It’s a time when mankind’s reign has at last come to an end, partially by his own hand, and much of humanity has descended in to barbarism. The world is not new; it is old, chewn up, and spit out. This is the Metal World.

In the Metal World, the premise is simple: man has been occupying Earth and the greater solar system for a long, long time. And in all this time, the principles of industrialization and abuse have never, ever left the culture of humanity. As such, over time humankind wiped out or depleted all natural reserves, depleted their own habitats, and ended up left with nothing more than the heaps and mounds of recycled garbage to fight over. Wars erupted, and mankind descended in to a tremulous chaos of barbaric conflict, a second coming of the Dark Ages. After thousands of years of conflict, humanity has forgotten much of its high tech knowledge, and the greater culture is one which depends on warfare, survival, salvage, theft, and a reliance on the relics of a forgotten age.

The vision of this world is harsh: everywhere one looks evidence of humanity’s passage can be found. Find a starflitter and take a high-gee trip out to Io near Jupiter, and there you will find a vast floating industrial smelter, long abandoned, but still mining the moon for its suphurous resources under the power of mechanoids who have nothing better to do. Jourey to Titan, and you’ll find a vast network of cities beneath the frozen oceans, manipulated in to some twisted dystopia by a powerful artificial intelligence with delusions of godhood, and a population genetically altered beyond recognition. Head to the home world, Earth, and you’ll see a gray wasteland of desert speckled with ruinous cities, and at the heart of it all is the Necropolis, where the last surviving government on earth keeps its miles-deep city population pacified with neural suppressants, so that the last genetically pure humans will remain safely wrapped within the visions of their transgenic dreams.

There are powerful warlords roaming the wastelands of Earth, looking for scraps and fuel and food to sustain their ragged armies of mutants and half-machines. There are transgenically engineered spacers so strange and different that they officially left all relationships to the human species behind nearly thirty millennia ago. As far out as Pluto and the Kuiper Belt, genetically enhanced dolphins and whales that have been turned in to transgenically uplifted cyborgs harvest resources from the not-yet depleted cometary debris. And elsewhere, in the terra-formed hothouse that is Venus, an entire ecosystem runs wild as strange and horrifying new species arise from the pets of man and turn the realm in to a jungle of death.

This is the world of Savage Metal. It’s a helluva ride for those who want to take it, but worth every second of the experience. Just remember, life is short here; find a fully-functioning clone bank and memory-uploading service if you want to live forever, or pay the enormous expense of you soul to join the Necropolis for perpetual life. Take what you need, when you need it, because everyone else will do the same, and never, ever back down in a conflict. Nietche would love this place. 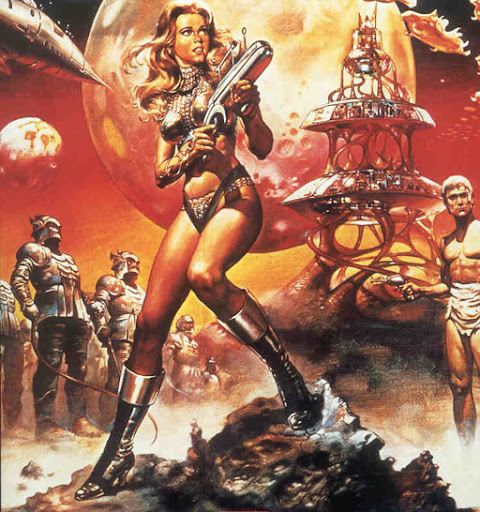 Look and Feel
I won’t beat around the bush: Savage Metal is about that special genre of comics and fiction that have been typified by Heavy Metal and the many counter-culture arists and authors that have arisen from its pages over the years. It’s a future that can be seen depicted in the art of Luis Royo, Moebius, and other artists who have managed to create elaborate, nihilistic views of the future and the past in striking detail. It’s about the concept of society gone horribly wrong, of everything we could hope for un utopia arriving, and then failing us on every possible level. It’s about being caught naked and alone on an island overridden with apes who are actually men who’ve de-evolved back in to a more primitive state, and who make their nest out of the ruins of the Statue of Liberty, where they worship their primitive god, a rogue AI that was once the programmed curator for the Museum of Natural History, and now thinks it is the God of All Gods. That’s what this is all about.

As such, Savage Metal includes a sort of Lifepath Generator to help establish the look and feel of your character. It’s also suggested that, unlike mosw SW characters, your SM character should really start off Seasoned with about 20 experience points. Life’s harsh and chances are, your characters was Seasoned before she or he hit puberty. It’s a tough life, and Novices are quick snacks for the predators out there.

Another important thing to remember about Savage Metal: it doesn’t always have to make sense. The GM section on this setting will include a means of generating really crazy, weird concepts, as well as provide a lexicon of data on the strange future universe. Part of the fun of Savage Worlds is to take the constraints of the setting (Earth and the solar system, the far future) and work whatever crazy, hair-brained concept you want in to it (alien invasion, trans-dimensional adventures, lost planet stories).
The technology in Savage Metal is far, far future. It’s Star Wars layered on to 2010 and everything in between. It’s full of clichés in sci-fi art and comics, it’s loaded with speculative nonsense, and it’s rife with hard core stuff grounded in real physics all at the same time. For my own purposes, it’s going to work along these lines: Hard SF is the baseline, but just about anything you can conceive of that can even remotely be postulated to work will be considered fair game. Thus, I see no reason we can’t have giant, transgenically modified whales that have been cybernetically enhanced and coupled with ion engines and mining gear to ply the Kuiper Belt for raw material from asteroids and comets. Is it feasible? No. But does it make for a really cool image? Hell yeah.

Savage Metal is also about skin. And hygiene. And really big fuckin’ guns. And lots and lots of blood and guts. Violence should be normal (thus the section about clone banks and PCs). Guns don’t just hurt; they blow the hell outta anything that gets in their blast radius. Armor is around, but it tends to be piece meal, and not as effective as it looks. It’s a simple fact of genre conventions that heavy armor is cool looking, but it’s hard to be impressed by the nubile warrior-chick or the brawny skin head with the voodoo tattoos if they’re hidden under layers of motorized metal. So the idea is simple: these suits exist, but they're very expensive to maintain and tend to show up whole-cloth only in environments where they are necessary, like space, or Venus. Or down at the corner market. But the point is, armor tends to be piece meal and doesn’t often cover the important things in life, like boobs and biceps. Remember: fashion is dictated by comic art, now. If Royo wouldn’t stick his latest model in it, then it’s time to rethink the outfit.

So, you’ve got the basics of the formula for your character right now: someone whose genes may only peripherally bear a resemblance to our own today. Someone who found a way to make Kevlar shoulder pads and a lace nighties work together. And someone who’s figured out a way to make a SAW work like a handgun with minimal recoil. And yes, someone who’s idea of a slick ride is a chopper with tires wider than the right lane of the road, laden with metal spikes that are guaranteed to leave a trail you can follow. But she’s not worried, because no one, absolutely no one who crosses her will live long enough to take revenge. And she’s got the trophy skulls mounted on her front bumper and knee-guards to prove it. 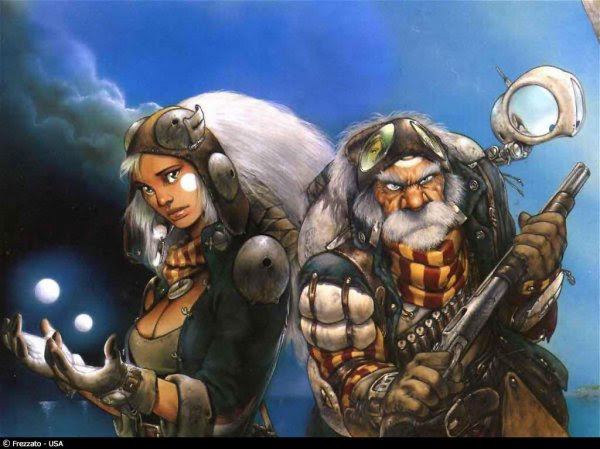 Comic Suggestions: Heavy Metal magazine, anything by Moebius including Metabarons, Incal, and Metal Hurlant, the art of Luis Royo, Azpiri’s Lorna, Frezatto’s Keepers of the Maser, Tank Girl, Judge Dredd…these are all good examples. Rule of thumb: if it’s a comic artist and it’s French, you are on the right track.

Film Suggestions: Brotherhood of the Wolf (but transplant it to the future), Tank Girl, Ultraviolet, Resident Evil: Apocalypse, the Mad Max films, David Lynch’s version of Dune. Truthfully, I don’t think too many films have successfully captured the look and feel of this special subgenre of comics. But there are handfuls that get close.

Game Suggestions: Some other games have tackled this genre with mixed success. I am particularly fond of Mutant Chronicles as well as Metabarons. HOL was a strange and humorous attempt at nihilistic dystopic fantasy. 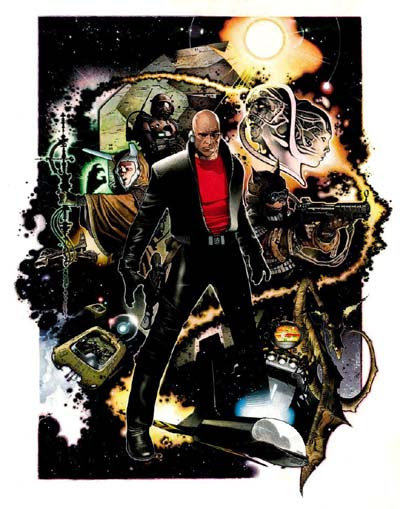 Text copyright 2011 by Nicholas Torbin Bergquist, all rights reserved
Posted by Doctor Futurity at 6:00 AM