There's a decent review of Neverwinter Nights for Facebook up over at Enworld (been there for a while but I just discovered it in my Enworld email). I just wanted to say that it is pretty succinct and to the point in the issues with this game, and while I was less concerned about the rules changes when I tried it out, it was the blatantly obvious "incentivized purchase and play" cash grab bits that quickly turned me off as I realized that a Facebook App by any other name is still Farmville, no matter how much you make the cows look like kobolds.

Sadly, they could have had a hit here if they'd just been willing to make it a real F2P that wasn't Facebook linked, and been willing to trust that the gaming community who would play this game do not need a dumbed-down D&D experience. Oh, and I'd have paid a retail price for this game too. I'm getting tired of "F2P" games with painfully obvious efforts to get me to pay cash for garbage tokens and nonsense just so I can gain magic items and perks in-game, something that I feel really does move into a weird territory that almost feels like the predatory environment of casinos, except without the miserable odds of any sort of decent return (being replaced by absolutely zero odds of return, if you regard the actual worth of the vitual cookie you just bought).

For extra credit, they could have marketed it as a successor to the Gold Box era, and I'd have totally bought into it. I mean, 4E is very easy to design a turn-based map-to-grid experience for, isn't it? Is there something about the mechanics that somehow doesn't translate well into the medium of PC gaming that is invisible to all but the trained programmer's eye? 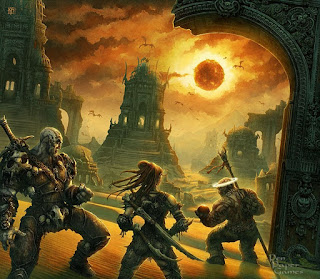 Posted by Doctor Futurity at 8:10 AM