The Caves of Chaos Level 3: The Abandoned Level

The Third level of the Caves of Chaos:
The Abandoned Level


1. Entry Chamber. The door has been locked and barred from outside, but is not difficult to enter through either side. the PCs will see heaps of rubble from a partially collapsed the Inside, roof . A den of six dire rats have made a nest here. Digging through the rubble will lead to a 10% chance per turn of the roof collapsing again, causing 1d6 damage.

2. Forgotten Priest Chamber. One of the many ancient rooms. chiseled and carved out of the caverns by the long-dead priests of Dalroth who once dwelt here, this forgotten chamber contains shattered furniture, scattered bones, and crushed skulls. Several ancient sacrificial daggers litter the floor, with tattered robes, blankets, and broken chests. About thirty copper pieces are scattered around. A careful search will reveal a small piece of parchment that states "...and upon finding that they key to entry lies within the resting place of the dead Anyu. The rest of the parchment is missing, as if burnt.

3. The Warrens of the Kobolds. These despicable little Miniglir have taken up residence within the narrow cave passages once inhabited by giant rats, carrion crawlers, and other vermin. Anyone other than smaller demi humans must stoop down to move about, and must occasionally even get on all fours. The Warrens consist primarily of guard chambers (a), community chambers (b), harvest rooms (c), fighting pits (d), prison rooms (e), elite chambers (f), and trade halls (g).
There are about three hundred kobolds and countless younglings dwelling here. They hunt giant rats, spiders, and carrion crawlers for food, while trading with orcs, darendur, and sniverfeblin. They do, occasionally, rise up into great hunting groups and attempt a coup on some East Mountain Maddendur outpost.

4. The Stale Lake. This ancient body of still water has pooled here and never drained out of the cave. It is a major source of water both for the orcs and kobolds cavern passages wind to both tribelands and warrens.
The lake itself has giant albino blind monstrous dire killer frogs dwelling in it, which will surface and attack only if PCs linger too long. There is a 20% chance at any given time that a water party of armed kobolds, or a dozen or so female orcs accompanied by two male warriors will enter to fill jars with water.

5. The Great Chamber. This huge chamber is long, irregular, and filled with dozens of side passages leading to other areas of the Caves of Chaos and to East Mountain. It is a major source of traffic for the many denizens of the caves.
Crude writing in orcish and Ashtarth (dark elf), as well as cryptic glyphs of unknown origin and readable only by magic will indicate directions and correct passageways to get to the Iron City of Kurtzas of the Darendur dwarves, Southward passages to the Thyzzakoni (Red Orc) city of Bargan, Eastward to the Utter Deeps where only Hyshkorrid Mind Flayers and Ashtarth Dark Elves dwell, and three more passages to orcish-dominated territories for the Grimdeath, Bloodyspear, and Bowelsplitter clans, as well as a warning to stay well away from a tunnel that leads to, "The Infernal Deeps of the Mountain," a place which subterranean guides will only say contains a series of passages with portals to firey and infernal realms.

6. The Resting Place. This is a chamber crafted carefully by Darendur dark dwarves to serve as a place of resting in their questings. A pool of water is in the center of the room, and a fine stone furnace of rock is not too far away. Dwarvish grafitti can be found all over the stones in here. It is possible the place might be in use when the PCs show up.

7. The Piercer Chamber. This vast chamber houses strange underworld mushrooms and fungus, as well as dreadful piercers all over the roof. A Move Silently roll, or Hide check at DC set by the Piercer's Spot checks must be made to get through undetected.

8. Pond of the Abalin. This still pool is devoid of life near it; an abalin hunts these waters. Rumors amongst the subterranean tribes suggest that the Abalin was spawned from an egg spat forth by the sleeping Kraken Ambrogasia, a god-like being with the body of a giant and head of an octopoid which rests in the deepest bowels of the Caves of Chaos,though none remember how to get there.
The Abalin is always hungry, and cares little for other than food.

9. Chamber of the Forgotten Battle. Old, rusted weapons, scattered bones, and partially intact skeletons mark this forgotten battle. Many of the remains are of dwarves and orcs. In the center of the old cavern is a blackened, heavily burned region. The site itself has been thoroughly looted, but anyone searching here has a 10% chance of locating a weapon in good enough shape to be easily fixed up with the right proficiency. In the center of the chamber is a single stone with an old orcish symbol of victory etched upon it. Beneath this symbol are darendur grafitti runes, which read, "The Lost are Mourned. They Died for Naught. Now their souls quest ever on."

10. The Chamber of the Hopeful Vein. Within this lengthy passage, towards the end, is a Darendur mining operation. This crew of thirty thinks they have found a vein of mihtril, and are pursuing it in great hope. Much of what they are actually getting is copper, and small amounts of iron. Still, they are certain that they will come across something. The darendur are neutral to all but kobolds, whom they have recent cause to despise, as the foul things tried to steal from them a few weeks ago. They will be dispassionate and potentially abuse to non darendur dwarves. They will offer all the copper and iron they have if the PCs have valid information on the location of mithril. They can also shed light on the battle room, if the PCs have been there and inquire, explaining that the dwarves were Iron, and came on a revenge attack against the Wolfguts, but were overwhelmed and in their retreat were caught in that chamber and fought to the last dwarf. This happened about forty years ago. Oddly enough, they say, it is not the first time a losing battle has been fought in that chamber, and tales have gone on for a long time about its curse on warriors. (this is all a legend, without truth).


12. The passage to Gnoll lands. Gnolls are feared and suspected by all around here. The gnolls are happy to preserve this reputation. PCs would have to go a couple miles down these winding cavern passages before getting to their territory, however.
The Gnolls enjoy cultivating war beasts, and rely on these trained abominations to guard their expansive tunnels. There is a 15% chance per thirty minute period of stumbling on a trained Hooked Horror, Dire Wolf, Monstrous Spider, or Monstrous Scorpion, and a 30% chance that one or two gnoll handlers will be with the guardian beast.11. The Passage to the CravenSkull Tribes. This passageway is guarded by orcs of the Cravenskull tribe, and they are extremely paranoid of anything that comes out of the Southwest caverns. They only enter to capture kobold slaves or raid Wolfgut tribelands. There are usually about 3d6 guards here, led by an intermediate warrior of 3rd level. A clever approach can catch them off guard. The Cravenskulls are a poorlot; the average tribesman is armed with a shortspear or club, leather armor, and 2d6 silvers. 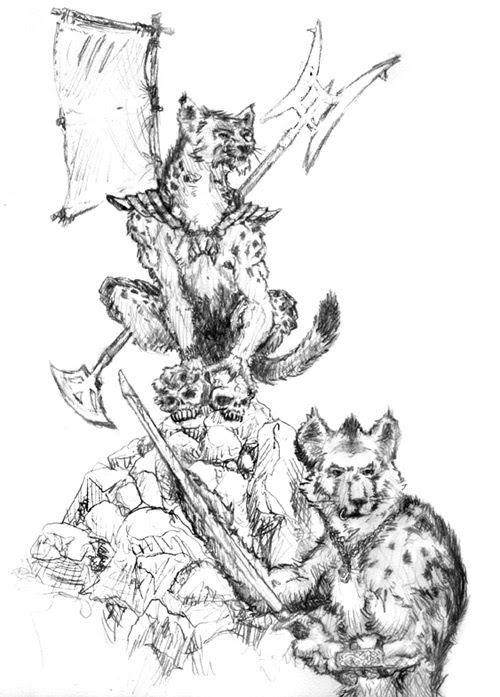 13. The passage to the Minotaur Mazes. This passage eventually enters the area of the mad Mishrag Bullman Zeladnagar. He has planted a false note, seemingly dropped by accident from a diary, speaking of how close some unknown party is to the vast treasure beyond. This is a lure, of course, to get people to keep moving on.
Zeladnagar is an especially powerful Minotaur will maximum hit points. He periodically heads out in to the wilderness to seek out human or demihuman women for mates, and has three sons (Minotaurs must find women of other species to propogate with). When wandering the maze, there is a reasonable chance of encountering his sons, and a 10% chance Zeladnagar is out looking for fresh wives. Likewise, his sons do most fo the trading with the other subterranean tribes, and so it is possible to find them visiting other levels.
Hidden within the maze is their treasure lair, which consists of stolen loot and the robbings of orcish and deep dwarvish tombs totalling 7,000 gp in artifacts, statues, raw coin, crude stones, and non-magical arms and armor.

Text and Map Copyright 2011 by Nicholas Bergquist, all rights reserved

Note: I had no choice but to clean up this map a bit; the original scan I had on file was atrocious. 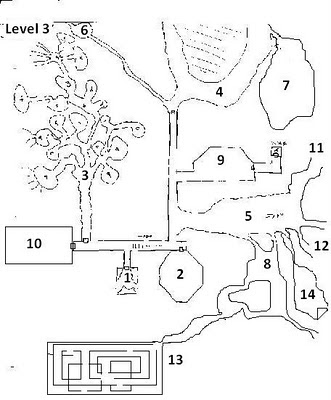