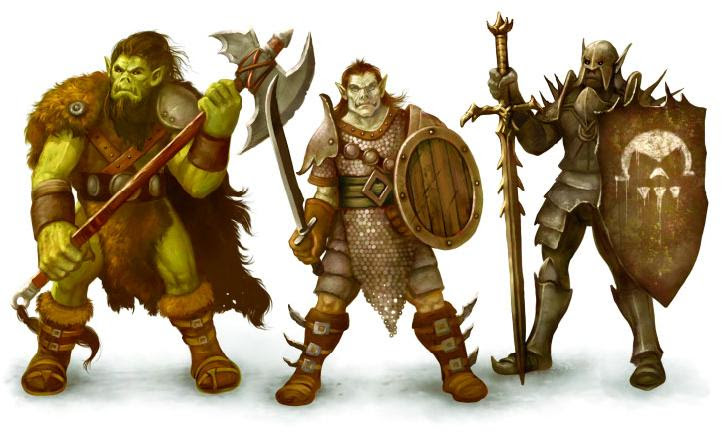 To provide equal time to Pathfinder, I offer up the Orcs of the Warlords Era of Lingusia! This material is from the same source as the earlier work, but modified to reflect the different game system (Pathfinder) and timeline (Warlords era 3,500 aw). I will be publishing more Warlords Era content soon, to offer a better frame of reference for this particular time of adventure, which is also the definitive default campaign for all of my Lingusia tales these days.

Blyskanyu, Blue Orcs
The barbarian tribes of the blue orcs are strongest within the Halale Wilderness and Mitra’s Woods, and they have a long, sordid history as rising to the occasion for any chaotic armies that need assembly in the name of evil. Blue orcs are the most tribal and violent of all the orcish tribes, though a few noted individuals in history have outgrown their violent heritage. Blue orcs are mostly barbarians, although they have many shamanic clerics dedicated to various demon gods and Baragnagor especially. Long ago the blue orcs worshipped the dread god called the Kraken, located in deep caverns beneath Old Chegga, but in the centuries since the Long Darkness after the fall of the Hyrkanian Empire the Kraken began to move, winding its way through the caverns for an unknowable purpose, a protean somnambulist of evil, until it at last found its way to the open waters of the Inner Sea. The loss of the Kraken affected many orcs, who sought other entities of darkness to worship and gain power from, and it  is said that these shamans of the bue tribes turned to a dark power dwelling beneath the central plateau lands of southern Octzel, a being they call the Blighted One.
Blue orcs are the most bestial in appearance of their kind, often with great guts and massive craws hanging beneath their long pig-like chins. Their women are just as notoriously disgusting, although occasional tales abound of valorous gray orcs “liberating” female blue orcs who are actuall comely (by gray orc standards) from their blue orc clansmen who deserve, according to the gray orcs, only the most porcine and protuberant female kin in their bed skins.
·         Blue orcs receive a +2 racial modifier to Knowledge-Nature skill checks related to or in their native lands of Mitra’s Forest and the greater Halale Wilderness.

Thyzakkoni, Red Orcs
The Red orcs are a distant off-shoot of orcs that are dedicated to Set, the god of evil, and they are the most magically gifted of their kind. The Red orcs have the smallest overall population, being conservative in their breeding efforts, though ironically they are the only orcs who have a proper balance of males to females, as well. These orcs are spread among many tribes, and seek power in the control of their lesser kin, rather than the consolidation of their tribes in to concentrated power groups. Some believe their magical talents have a side effect of making it difficult for red orcs to produce offspring, but others more rightly suspect that the dilution of the blood with their lesser kin is the real result of so few of their kind.
Red orcs are the least bestial of their kind, with more ape-like faces and bodies than other orcs. Red orcs are the only scaled orcs in the world, and they have noted featues such as forked tongues and serpentine eyes as well, due to their prolonged worship of Set andinteraction with serpent men, it is believed. They are exceptionally gifted with magic, and few of their kind are unable to perform at least a few simple spells.
·         Red Orcs are treated somewhat differently than normal orcs, and have normal average intelligence (do not apply any penalty at character creation).
·         They get a +2 racial modifier to the bluff and intimidation skills; though they tend to be no more charismatic than other orcs, red orcs are known for their skill at lying and manipulation.
·         Red orcs are commonly gifted with arcane or divine talent. Regardless of starting class, a red orc character must choose wizard, sorcerer, cleric or some other spell-casting class as his favored class provided his minimum stats allow for spell casting. Red orcs that are incapable of spellcasting are outcasts and usually condemned for their lack of talent, seen as an affront to Baragnagor or the demon gods.

Gul’Hlath, Black Orcs
Amongst the many species of orcs are occasionally born anomalous greater orcs, the Gul’Hlath, called black orcs for their blackish tar-colored skin. These are chaos infused beasts, great in strength, and they are coveted for a military prowess that seems inherent.
Black orcs are born of other orcish stock, and when this happens, they are almost always seen as a gift from Baragnagor. Only a few orcish chieftains will kill such babies outright, usually in fear, and only if they can get away with it. Usually, the child is immediately taken from the parents and put in to a warrior’s fraternity, such as the Bloody Hands or the Screaming Skulls, and they become powerful warriors in short order, destined to rule the tribe as a warlord in the future.
Black orcs have been very rare since the era of the Cataclysm, and amongst those few eccentric scholars who study orcish culture, it is suspected that their perverse kind may have been a product of infusion with an unborn orcish child and a demonic soul for unknown purposes.
The following benefits apply to Pathfinder only:
·         Black orcs have normal Intelligence and Charisma (no penalties) unlike normal orcs.
·         +2 natural armor bonus
·         +2 racial modifier to intimdation and diplomacy

Fell Manorgs, White Orcs
The northern orcs are a plague amongst the Autrengardian northern kingdoms, and are much like the Blyskanyu except for their more primitive tribal societies. Fell Manorgs are best described as being somewhat yeti-like, hairy white-furred beast men with beady black eyes and white-gray leathery skin underneath. They molt in the Summer and travelers in the north look for signs of their shed fur as a warning. Fell manorg are in all respects like normal orcs otherwise.
·         Fell Manorg receive a +2 racial bonus to stealth checks in a snowy environment.
·         Fell Manorg are an isolated and xenophobic lot, and receive a -2 modifier to all diplomacy skill checks when dealing with other demi-humans.
·         Fell Manorg may never start with another language other than orcish, goblin, minotaur, giantish or draconic.
·         All Fell Manorg start off illiterate (which precludes them from starting at 1st level as a wizard), and must spend skill ranks in Linguistics to buy this off, at the cost of one rank per spoken language.
·         Fell Manorg who choose to be Rangers usually take humans as their favored enemy. Such rangers are known as a special order of warriors among the white orcs called the Thro’Skaldar, and they revere Wolfon, lord of the hunt.

Amenanyu, Green Orcs
The goblinoid green orcs of the Sea of Amech are savage primitives, dwelling both above and beneath the surface of their remote islands, warring unceasingly upon man. They are degenerate throwbacks, but considered by some the closest to the progenitor god Baragnagor. Amenanyu are almost always barbarians when choosing a class. It is common in the this era for green orcs to seek out the worship of the dead god Belphegor, whom they seek to restore to life; their shamans are said to commune with the spirit of this dead immortal demon-turned-god.
Amenanyu are so crocodilian in their facial features that they are sometimes mistaken for short lizardmen. Their lack of scales and excessive body hair usually gives away their true natures, however.
·         Green Orcs are natural experts at jungle camouflage and survival, and receive a +2 racial modifier to all Nature, Stealth and Perception rolls in a jungle environment.
·         Green Orcs are very disagreeable with other demi-humans, and receive a -2 Diplomacy skill modifier with all normal demihumans and humans (but not other orcs and monsters).

All text copyright 2011 by Nicholas Torbin Bergquist, All Rights Reserved
Posted by Doctor Futurity at 6:00 AM