Before I get around to releasing more Material for the Warlords Era, I figure I'd better get out the rest of the stuff I did for the Ages of Lingusia Empire Era. It's the "original" campaign period for Lingusia, after all, and I had a lot of fun doing these revisions. Once again, the material is a bit of a mix, but what I offer up today is the first part of an overview of my favorite region, the fabled Kingdom of Octzel. I'll start off with some maps today, two parts. These are among the fifty-odd hand drawn maps I have of Lingusia, and while not the original maps I designed in the 80's, they are relatively faithful renditions I did in the early nineties, repurposed for the the Ages-Era reimagining of those original campaigns. Apologies in advance for my horrific handwriting, if I get the time to clean them up I will post better maps eventually. For now, though, I offer some maps that represent the core of the Middle Kingdoms of Lingusia, focusing on the lands of Octzel, Hyrkania, Sylvias, Jhakn and beyond: 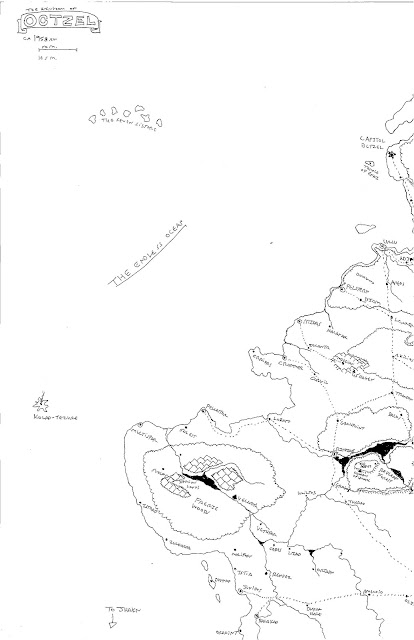 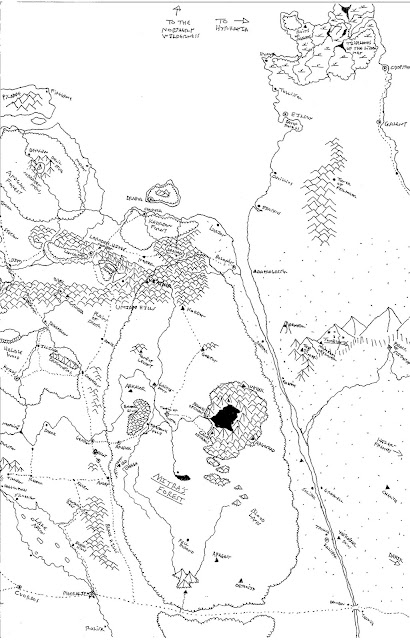 Here's a zip file of all the Lingusia maps to date that I have on file. I'll add more maps relevant to the "Ages" era as I find them.
Next: Introduction and Overview of the Ages of Lingusia

Maps Copyright 2011 by Nicholas Torbin Bergquist, all rights reserved
Posted by Doctor Futurity at 6:00 AM