After a bit of flu this weekend I found I didn't make it out of the house. On the other hand, I had a three day weekend thanks to the holiday, so I took advantage of this convergence of "stuck in house" + "Thanks, Columbus" to finish at long last Dragon Age: Origins, and the expansions, including Lelianna's Song and the Dragon Age: Awakening mega-expansion. Whew. Very good game, extremely emotional impact at the end (lets just say that to avoid continuity issues I couldn't import my PC from DA:O to DA:A) and I have to say that this game remains one of many reasons Bioware is CRPG king out there. Looking forward to Dragon Age II (I know its changed up a bit, but as long as the storytelling is good old Bioware, I'm cool with it). 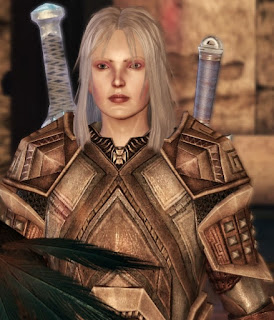 And long live Dartain, just another Gray Warden in the wrong place at the right time: 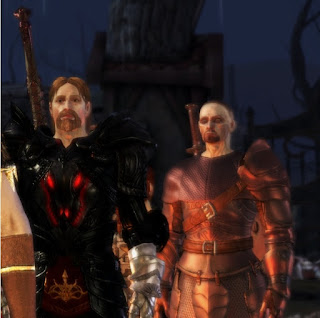 I think its very telling that this game...a computer RPG no less....left me feeling pretty attached to the characters and their tales. The last several hours of Dragon Age: Origins was better than most movies or books, I felt, and the ability of these tales to invoke a meaningful sense of consequence (and moral ambiguity) for one's choice of actions was impressive. It's very rare to see that in any medium, especially gaming.

Posted by Doctor Futurity at 11:41 PM