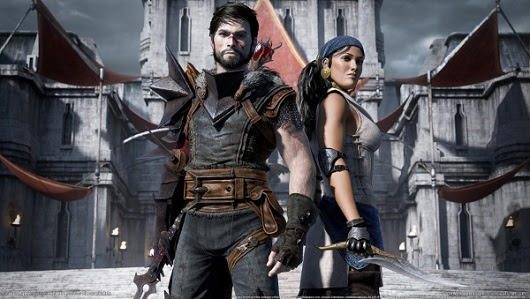 So I've been poking around loking for interesting stuff, blogs, what have you for the AGE System and Dragon Age PnP RPG. I have found some gems, thought I'd post links for those who might also be interested, a really cool site for the system:

Dragon Age Oracle is a great resource for DARPG stuff. There's a scenario for DARPG here! It looks like a decent introductory adventure. There are also some other useful resources, including some new monsters right here. Also, check out this Pathfinder hack for DARPG, adapting the Pathfinder classes/races to Dragon Age. I was seriously overjoyed when I found this....it might dramatically ease the prospect of getting some of my more stubborn cohorts to give the system a spin.

There is the aforementioned AGE System Conan Hack here. I talked about this a couple days ago, but felt it was worth mentioning again.

Esoterica of Thedas Volume I is available from Google Docs and looks quite interesting. I am having trouble finding a working link to Volume II. Is it just me and my browser, or is Google Docs garbage?

Then I discovered this web site and realized someone had already done all the Finding Cool Stuff work for me.

This is inspiring me to do an AGE Hack for Ages of Lingusia, or the more recent Warlords Era campaign...or maybe my more traditionalist Irkalla campaign (in which elves, dwarves and men are the only normal races). I think I might just set about to doing that....over the next month the Ages Era setting will be features with daily entries, mostly a generic setting with occasional references to 4E or sometimes Pathfinder; when its done, if I am sufficiently inspired, I will work on an AGE-based release for the current campaign in Lingusia, the Warlords Era...or Irkalla, if I don't feel like converting all the WoL Pathfinder content.