I thought I'd provide the most recent, updated edition of orcs in the world of Lingusia. This text presumes the orcs date to around the Ages of Lingusia era, which means nothing to anyone other than myself and a handful of other people, but for posterity puts the details in this writeup as relevant more or less to the year 1,950 aw. It is easily used with the later material in the Keepers of Lingusia campaign book, which is set around 2,476 aw. I have an entirely separate Pathfinder-based write-up for the orcs of Lingusia by the time of the Warlords Era (3,500 aw).

For a blog called "Realms of Chirak" I really need to put more....well...Chirak in here. Oh well! Lingusia it is for now. 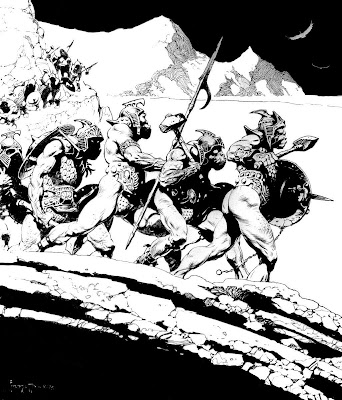 Orcish Characters
Half-orcs and orcs can be played in 4E using the standard racial rules for both as given; apply the following modifiers by racial subtype if desired.

Glythanyu, Gray Orcs
The surface dwelling gray orcs are the most acculturated with humanity, and are the likeliest source of half orc cross breeds brought about by voluntary relations (yes, amazingly). They are remarkably agreeable being as orcs go, with a culture dominated by a sense of pride and a belief that though they were, indeed born of an idiot god’s confusion that they can aspire to be much more. This racial pride has allowed for a fairly unusual conversion in recent years, as an orc named Naradaon claiming to be an avatar of the agrarian god Seth has set about to converting his people to a different faith, moving them away from the chaos cults. The results have varied, but many tribes in the region of Ocentash have now become friendly to humans and elves and are seeking to pursue the dictates of the pacifistic god Set. Ironically, the first orcish temple in the Hexerei Mountains is militant, staffed by a dedicated handful of orcish warriors who have become paladins in the name of Seth. Naradaor has not scolded them for such antics, seeing instead that it is necessary for the warlike nature of the orcs to find an expression, and doing through so through the adoption of an honor-based military caste form may be the logical means of helping the orcs cast off the yoke of chaos.
Gray orcs are distinguished by their more humanoid looking features, with the shortest snouts of their kind amongst the men. Female gray orcs rarely have distinct snouts at all, but pronounced tusk-like incisors instead. They have dusky gray skin and patchy hair, usually gray or white.

Blyskanyu, Blue Orcs
The barbarian tribes of the blue orcs are strongest within Mitra’s Woods, and they have a long, sordid history as rising to the occasion for any chaotic armies that need assembly in the name of evil. Blue orcs are the most tribal and violent of all the orcish tribes, though a few noted individuals in history have outgrown their violent heritage. Blue orcs are mostly barbarians, although they have many shamanic clerics dedicated to various demon gods and Baragnagor especially. There is a surge of worship amongst the tribes of the Cults of the Kraken, the ancient prehistoric order of primal gods that are said to still slumber beneath the earth. Indeed, the ruins of Old Chegga harbor a direct entrance to once of the subterranean prisons of these terrible beings. The orcs do not know what the Kraken is, merely that it is ancient and powerful, and grants their shamans profound power through its terrible dreams.
Blue orcs are the most bestial in appearance of their kind, often with great guts and massive crocodilian  craws hanging beneath their long pig-like chins. Their women are just as notoriously disgusting, although occasional tales abound of valorous gray orcs “liberating” female blue orcs who are actuall comely (by gray orc standards) from their blue orc clansmen who deserve, according to the gray orcs, only the most porcine and protuberant female kin in their bed skins.
·         Blue orcs receive a +2 racial modifier to Nature skill checks related to or in their native lands of Mitra’s Forest and the greater Halale Wilderness.

Thyzakkoni, Red Orcs
The Red orcs are a distant off-shoot of orcs that are dedicated to Set, the god of evil, and they are the most magically gifted of their kind. The Red orcs have the smallest overall population, being conservative in their breeding efforts, though ironically they are the only orcs who have a proper balance of males to females, as well. These orcs are spread among many tribes, and seek power in the control of their lesser kin, rather than the consolidation of their tribes in to concentrated power groups. Some believe their magical talents have a side effect of making it difficult for red orcs to produce offspring, but others more rightly suspect that the dilution of the blood with their lesser kin is the real result of so few of their kind.
Red orcs are the least bestial of their kind, with more ape-like faces and bodies than other orcs. They are exceptionally gifted with magic, and few of their kind are unable to perform at least a few simple spells.
·         Red Orcs are treated somewhat differently than normal orcs, and have normal average intelligence.
·         They get a +2 racial modifier to the bluff and intimidation skills.
·         Red orcs are commonly gifted with arcane or divine talent. Regardless of starting class, a red orc character must choose wizard, sorcerer, cleric or some other spell-casting class as his favored class. A red orc may choose a martial class to start, but must then use a feat to multiclass in to an arcane or divine class.

Gul’Hlath, Black Orcs
Amongst the many species of orcs are occasionally born anomalous greater orcs, the Gul’Hlath, called black orcs for their blackish tar-colored skin. These are chaos infused beasts, great in strength, and they are coveted for a military prowess that seems inherent.
Black orcs are born of other orcish stock, and when this happens, they are almost always seen as a gift from Baragnagor. Only a few orcish chieftains will kill such babies outright, usually in fear, and only if they can get away with it. Usually, the child is immediately taken from the parents and put in to a warrior’s fraternity, such as the Bloody Hands or the Screaming Skulls, and they become powerful warriors in short order, destined to rule the tribe as a warlord in the future.
·         +2 natural armor bonus
·         +2 racial modifier to intimdation and diplomacy
·         Black orcs gain one bonus at-will power in the same manner as humans.

Fell Manorgs, White Orcs
The northern orcs are a plague amongst the Autrengardian northern kingdoms, and are much like the Blyskanyu except for their more primitive tribal societies. Fell Manorgs are best described as being somewhat yeti-like, hairy white-furred beast men with beady black eyes and white-gray leathery skin underneath. They molt in the Summer and travelers in the north look for signs of their shed fur as a warning. Fell manorg are in all respects like normal orcs otherwise.
·         Fell Manorg receive a +2 racial bonus to stealth checks in a snowy environment.
·         Fell Manorg are an isolated and xenophobic lot, and receive a -2 modifier to all diplomacy skill checks when dealing with other demi-humans.
·         Fell Manorg may never start with another language other than orcish, goblin, minotaur, giantish or draconic.
·         All Fell Manorg start off illiterate (which precludes them from starting at 1st level as a wizard), and must acquire the Linguist feat to buy this off with one language slot per language they desire to read and write.
·         Fell Manorg warriors usually belong to a hunter’s society dedicated to specific prey. The most famous such society are called the Thro’Skaldar, and they revere Wolfon, lord of the hunt. Members of this order tend to be rangers, wardens and avengers, who specifically seek to hunt and slay humans. Needless to say this makes for a better NPC class option, unless your entire adventuring group is full of nonhumans!
·         Fell manorg hate Hettanari, Zuedians and Autrengardians (the northern kingdoms of men) with a passion.

Amenanyu, Green Orcs
The goblinoid green orcs of Amech are savage primitives, dwelling both above and beneath the surface of their remote jungle enclaves, warring unceasingly upon man. They are degenerate throwbacks, but considered by some the closest to the progenitor god Baragnagor. Amenanyu are almost always barbarians and shamans when choosing a class.
Amenanyu are so crocodilian in their facial features that they are sometimes mistaken for short lizardmen. Their lack of scales and excessive body hair usually gives away their true natures, however.
·         Green Orcs are natural experts at jungle camouflage and survival, and receive a +2 racial modifier to all Nature, Stealth and Perception rolls in a jungle environment.
·         Green Orcs are very disagreeable with other demi-humans, and receive a -2 Diplomacy skill modifier with all normal demihumans and humans (but not other orcs and monsters). 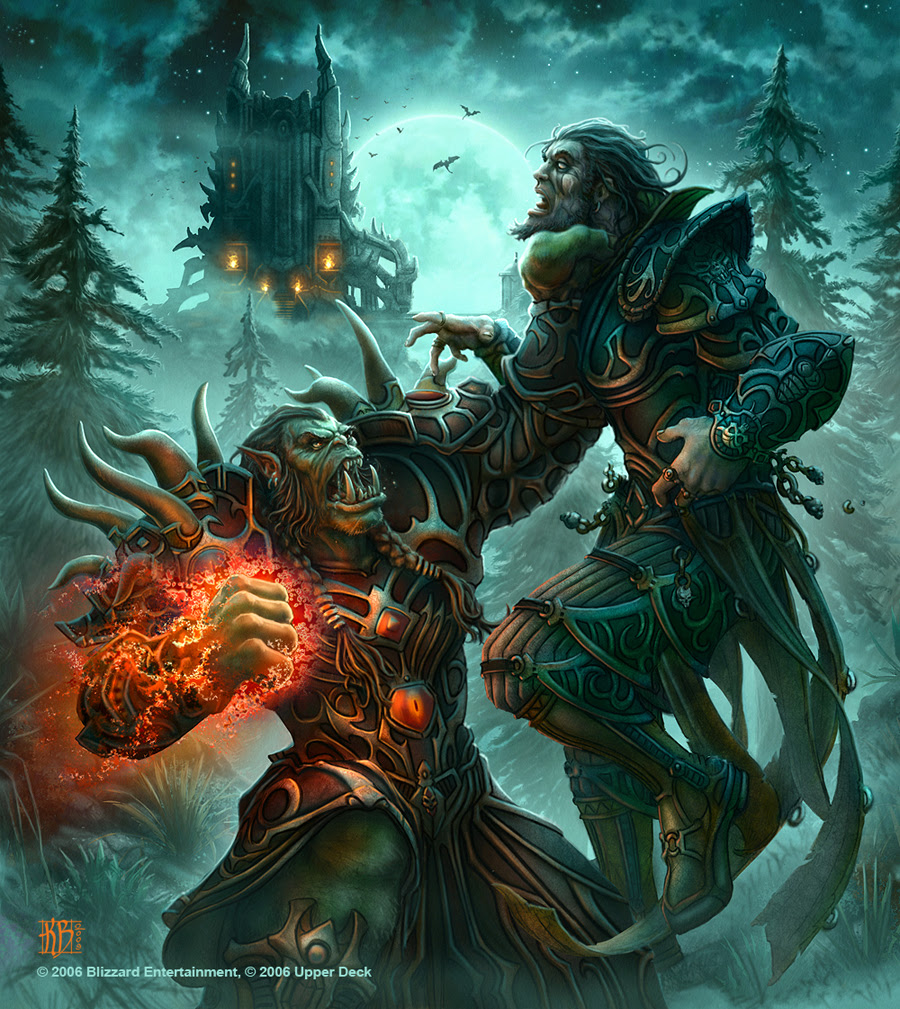 Text of "Orcs of Lingusia" copyright 2011 by Nicholas Bergquist, all rights reserved
Posted by Doctor Futurity at 6:00 AM