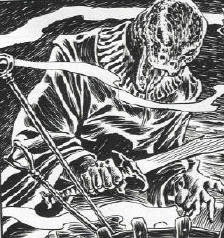 Serpent Men (Setites)
Serpentine, more snake-like than lizard like, these cunning scalykind are the gifted sons and daughters of Set. Indeed, the Serpent Men are related to snakes and ophidian kin, and are not true lizard folk like the Haikyndyr and Terkithyi. Setites are much more dangerous than either of their kin!
Appearance and Personality: Devious, cunning, manipulative minions of their god, Setites are out to promote themselves first and their species and deity next. They are slender, multicolored and scaled beings, who prefer to dress in ornate and expensive garb. Setites recognize their family affiliations by their unique scale patterns as well as scent, and are stratified in to strongly reinforced hierarchies of control in their empire beneath the sands of the Hyrkanian Deserts.
Relations: Setites are always behind the scenes, manipulating lesser beings to their will, as they are universally reviled for being the divine sons and daughters of the lord of evil. Setites who must travel in human realms usually disguise themselves with magic.
Religion: Setites might like to worship other gods, to hedge their bets, but Set gives them little choice. Any member of the species found deviating from the Lord of Evil's interests’ risks discovery and exposure. If exposed, he is exiled, killed, and often stripped of magical ability. Setite priests who defy the will of Set are not  allowed the benefit of escape by their god, who turns them in to even crueler minions who will have no choice but to do his will, such as Vampires or Fiends.
Languages: Setites learn their own tongue, plus Ophidian, Infernal, Draconic, the human and elvish tongues, Goblinoid, Hyshkorrid, dwarven, and even Ashtarth. Know your enemies, they say.
Names: Setites are by far the most articulate of the scalykind, but their names are still sometimes tongue twisters.
Male Names: Krillisk, Zyral, Kryllios, Vyrysk, Myrykaven, Vyrik.
Female Names: Sullia, Vyrys, Mynravhariel, Shyvaris.

Naga
The naga are a relatively new race of beings, at least as far as humans in the Middle Kingdoms are concerned. A thousand years ago their ancient underwater empire was devastated by an ancient Cataclysm, and the naga were fragmented in to many warring factions when their eons’ old empire fell. The naga, forced to survive in new circumstances, sought out watery habitats along the coastal regions of the mainland, and settled down. As amphibious beings they are capable of moving ashore without much difficulty, and some prefer it.
Religious motives are the key driving factor in the naga presence on land these days. The naga have fractured in to two groups, including those who hear the siren call of the Skaeddrath Krakens in their dreams, and are compelled to seek out these ancient chaos lords to awaken them, and a generation of naga who are allied with the forces of order and creation and wish to stop their driven compatriots. This strange civil war has been erupting for the last two centuries, and is especially common in the Inner Sea and Straights of Nyarlith regions of the Middle Kingdoms. By far however the largest populations of Naga can be found eastward, along the Bloodsea Coasts of Takkai, especially in Gochikono.

Naga Adventurers
Height: 5’5” to 6”
Weight: 150-180 lbs.
Languages: Naga, common, and other options include draconic, infernal, and the deep speech.
Attributes: +2 Dex, +2 Con
Movement Rate: 6 squares on land, 8 squares swimming
Size: Medium
Skill Bonuses: +2 Acrobatics, +2 Stealth
Deep Vision: Naga deep vision functions equally well underwater as well as in darkness. They can see in shades of grey even in total darkness.
Amphibious: Naga can breathe normally on land and under water with no impairment. Note that this does not protect them from unnatural attacks such as stinking cloud.
Natural Swimmer: All naga are excellent swimmers, and do treat any watery terrain normal terrain.
Armored Scales: Naga are scaled, and these scales provide natural armor protection, offering a natural +2 armor class bonus.
Tail Strike: Naga may use their tail like a club:
Naga Tail Strike – Naga Racial Basic Attack
At-Will – Standard – Melee
Target: one adjacent target; Attack: Strength vs. Reflexes; Hit: target takes 1D6+Strength damage.