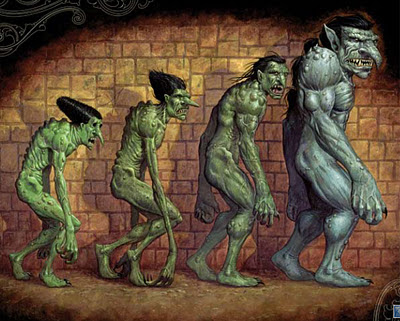 
In Lingusia there are many different and usually terrifying breeds of troll. Trolls are known by certain scholars as “adaptomorphic.” They can literally change over time to adapt to stressful conditions in the environment. As a side effect of this trait they have notorious regenerative powers, and a keen ability to interbreed and absorb the heritage of other creatures. Trolls for the most part are also notorious for their wide-ranging looks. The hulking barely-humanoid thargonids, the putrid and rotting agammites, the somewhat more humanoid and svelte mihidir and the immense amechian swamp trolls are all effectively the same species, despite being very different physiologically. They can interbreed, they understand the same language and they tend to think in the same way.


Of the many strange troll breeds, the mihidir of the Lower Dark are the most humanoid, and also the most suitable for an adventuring race. Mihidir have been strong denizens of the underworld caverns of Lingusia for countless eons; the oldest elvish tales speak of mihidir from when they were young, though in the ancient tales of the elves the trolls of that time were described as “perfect giants of form and mind,” a far cry from the multitude of beings called trolls today.


Mihidir tend to carry the same stock and look; they average seven feet in height, with pasty white, blue, or sometimes green and yellow skin. They have large eyes adapted to perpetual darkness, and the lean, goblinoid facial features most common in the male mihidir. They have overly large hands, feet and noses, and are described by most humans as “constantly looking suspicious.” All mihidir have naturally serrated, shark-like teeth. Some have even suggested that they can regrow teeth over time, just like a shark; some mihidir seemt o have mouths full of these vicious pointed teeth, practically filled to the brim. Mihidir males often have little body hair, or obsessively shave it if they do.


Female mihidir are surprisingly short, averaging only fix feet in height and usually being leaner and even more human looking. They have fewer teeth, but usually have longer, more wicked claws than the males. Females have much more body hair than males.


The Mihidir Kingdom is the dominant region of trollish occupation and control in the Lower Dark. The city of the trolls, called Nel’hagon, is located a mile beneath the surface of the human city of Lancaster in central Octzel. The Mihidir have often warred against the humans and dwarves above, often for pure pleasure, using armies of thrall goblins and other denizens of the lower deep as their cannon fodder.


Mihidir are exceptional for their known cruelty and cunning. Most mihidir, growing up in the deeps of Nel’hagon, undergo a childhood process that almost guarantees they grow up with minds not unlike professional serial killers. Some mihidir escape this process of thought, but they are rare and often leave trollish society as soon as possible.


Other known mihidir lands include the Kam’garit of Amech, where the mihidir are comprised largely of dedicates to the dark god Belphegor, and the Skidarask of the Bluesky Mountains in southern Hyrkania. Several mihidir tribes can be found in the Throne Mountains and the Mountains of Madness as well, though these tribes are not united and seem to spend more of their time causing trouble in local underworld politics for other beings.


Languages: Trollish, plus one other (usually Tradespeak or Deep Speech)


Claws and Teeth: Mihidir are well armed with natural attacks; gain the tooth and nail at-will basic attack below.


Wicked Cunning: Mihidir are notorious for their sense of cruelty and spite, and gain access to the Wicked Cunning racial encounter power, below.


You can heal unnaturally quickly.


Effect: Expend one healing surge; you gain regeneration 1 until the end of the encounter.


Special: This effect ends if you take fire or acid  typed damage.


You havehideously sharp, long black claw and an even more terrifying mouth full of cerrated teeth.


Special: Your teeth and claws  are melee weapons for purposes of any exploits, and may be used two-weapon style (two fists or a claw and bite) for exploits such as Twin Strike that require two melee weapons.


You do not play fair, and will take any opportunity you can to rub salt in to the wounds of your enemies.


Trigger: you inflict damage on an enemy


Effect: do additional ongoing damage to your opponent equal to your Int modifier (save ends).


Mihidir trolls are notorious for their expertise at setting deadly traps.


Benefit: You gain a +5 racial bonus to any thievery check to set or reset a trap. If you successfully set the trap, you may add your Int modifier to the damage the trap deals.


Some mihidir trolls find the blood of humans and other fair races to be intoxicating; some find any blood at all to drive them in to a crazed bloodlust.


Benefit: you gain the Mihidir Bloodlust power, below:


You taste blood and go mad with rage.


Trigger: you inflict damage on an enemy with your Tooth and Nail attack using a bite.


Effect: you go in to a bloodlust-filled rage. You automatically gain a +2 bonus to attack and damage for the remainder of the encounter (but could end sooner; see below), and armor class and reflexes are reduced by -2. You gain Resist Psychic 5. You must make at least one melee basic attack or melee exploit on your turn if you start or end your round adjacent to a target; you must move to the nearest target (either friend or foe) on your turn if you do not start adjacent to one and immediately make a melee basic attack or equivalent melee exploit. The bloodlust ends at the end of your first turn in which you can not begin and/or end the turn adjacent to a target against which you can execute an attack.


Trollish physiology is especially good at dealing with strange environmental conditions. You have found that you can adapt rapidly to changing environments.


Environmental Adaption: you may choose one type of difficult terrain and ignore it (you have learned or changed to walk on it at normal speed). This can’t apply to heat/fire based terrain types.


Elemental Adaptation: choose one form of elemental type (except for fire and acid) and gain Resist equal to your Con modifier against it.


More Teeth: Your mouth full of cerrated teeth has expanded, much to the amazement of your fellow trolls. Your bite damage is raised from 1D8 to 1D10.


Fast-Sealing Flesh: You can recover more quickly from repeating damage; gain a +2 save bonus to ongoing untyped bleeding damage.