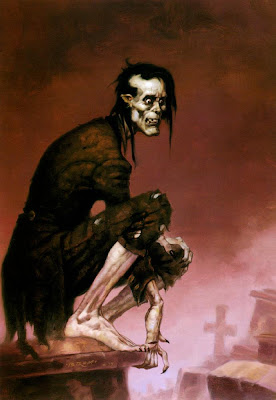 Sherigras
The descendants of the ancient chaos cultists who served the lords of chaos during the ancient era of the War of the Gods, these scarred and shattered people have remained cursed forever more. Even those who seek a good life find it slow going, as the very nature of their race is a blemish that most shun and fear automatically. Sherigras are reviled, and all too many of them seek to hide in forgotten ruins and ancient dungeons, plotting ways to awaken old and dark gods to destroy those who the sherigras despise for their beauty.
Skeletal and gaunt, sherigras have the appearance of recent corpses, or barely living victims of some terrible plague. The hideous, nosferatu-like features of the sherigras are terrifying to most normal demihumans.
Sherigras are a malevolent race by nature, and it is highly unusual to find one of good disposition; such freaks are usually weeded out by the other sherigras in their little covens, and sacrificed to dark gods. At best, an unaligned sherigras might manage to pass for suitably evil in his society, while secretly yearning for less, well, evil in his own life.
Sherigras love sorcery, and seek out its use whenever possible, in order to disguise themselves from the sight of others, if for no other reason then their own self-consciousness. They are well aware that champions of order and good look upon their kind with disgust, and feel that their entire species must be exterminated. This leads to some very paranoid thinking.
Sherigras are meant to fill a very special role within a campaign that has a focus on the forces of order and chaos. Just as dark elves are said in some mythologies to have been branded by their alliance with demons of chaos, and orcs were (in some worlds) corrupt elves, sherigras are in fact what happens to humans who are indelibly linked to the chaos they choose to serve.
Sherigras make excellent villains, but a player could easily take the concept of the sherigras and turn it in to a tragic antihero, born to a horrible fate which he never asked for, forced to rebel against a tight-knit culture of outcasts dwelling in the shadows and seeking to appease the dark gods which marked them so long ago. Or, he could embrace his destiny, follow the path of the necromancer, and seek to become more powerful than the dark gods which cursed his people…
Adventurers: Sherigras who seek to remove the taint of chaos from their family line are natural adventurers, struggling to survive in a world that sees them as marked with evil, while trying to cast off a curse of the generations. Sherigras who are evil have all sorts of motivation to go questing and seek greater power in the names of the Courts of Chaos. Sherigras make excellent assassins, necromancers, dark clerics, Shadow Mages, Skinwalkers, and other such hideous professions.

Sherigras Adventurers
Average Weight: 65 to 150 lbs.
Average Height: 5’1” to 6’6”
Languages: middle tongue and abyssal
Ability Scores: +2 Intelligence and either +2 Dexterity or +2 Constitution
Vision: dark vision
Move: 6 squares
Skill Bonuses: +2 Stealth, +2 Intimidation
Mark of Chaos: All Sherigras suffer a -5 racial penalty to Charisma rolls and skill checks where they are known to be a Sherigras and this works against them (but, if the sherigras is trying to intimidate someone, this penalty does not usually apply).
Taint of Chaos: Sherigras receive some unique benefits due to their taint, and regardless of class the Sherigras may choose one at-will power from any arcane class or wizard’s cantrip as a racial bonus power. The at-will may be used as an encounter power, and the cantrip may be used at-will.
Chaos Affinity: Sherigras are attuned to chaotic energies, and can feel the presence of planar beings and objects which are attuned to Order or Chaos (such as demons and angels or artifacts). The base chance of success is a DC 20+target entity’s level as a Perception check. Attempts at stealth or magical disguise can confound the chance of success as determined by the GM.
Manifestation of Chaos: Long ago before the cataclysm Sherigras were so attuned to chaos that efforts to advance the indelible cause of their dark gods rewarded them with strange side effects, and efforts to oppose their nature led to punishment. After the cataclysm this effect lifted, and sherigras have since been freed of their dark tether to chaos, although their bodies remain wracked with corruption. Choose or roll one trait from the following list, and gain that as your chaotic affinity; each affinity grants a penalty and a bonus accordingly:

Sherigras Chaotic Affinity Table (D100)
1-10: hideously skeletal; you start with 2 fewer healing surges, but gain the following power:
Skeletal Terror – Sherigras Racial Trait
Encounter – Standard – Arcane, Fear
Range: Close Burst 3 Attack: Int vs. Will; Hit: each target in burst slides 3 squares and grants combat advantage until the end of your next turn.
11-20: Permanent Blindness; you permanently suffer from the blindness condition, but gain the wizard utility spell invisibility as an encounter power; because you are used to your blindess, note the following special conditions: you suffer no penalty to Perception checks that do not involve sight; you do not grant combat advantage to known targets that you can hear; you are immune to sight-dependent effects and conditions.
21-25: Permanent loss of one arm, but you gain a flexible tentacle which provides a +2 racial bonus to Acrobatics, Thievery and Escape Artist.
26-30: You have hideous claws instead of hands. You gain a natural claw attack that does 1D8+strength damage (and can be treated as two attacks for powers requiring to melee weapons), but you suffer a -2 penalty to Thievery and any other skill check requiring fine manipulation. The claws do 2D8+strength damage at 21st level.
31-35: You have a serpent’s tail instead of legs. You gain a +2 bonus to swim checks with Athletics (and swim as a class skill) as well as a basic constriction attack, a swim speed of 8 squares and a land speed of 5 squares. You suffer all restrictions accompanied by having a serpent’s body instead of normal legs.
Constricting Tail – Sherigras Racial Power
At-Will  – Standard – Melee
Range: one target Attack: Dex or Str vs. Will (choose one at the time this power is gained); Hit: target suffers 1D8+Strength modifier damage and is immobilized (save ends).
36-40: A Visible black nimbus of chaos energy surrounds you, visible to anyone and disguisable only by illusions (spells); However, you gain Resistance 5+ ½ level Necrotic.
41-50: A Third eye rests in your forehead; it grants visions; you gain a +2 skill bonus to Arcana, and a +2 save bonus to any saving throw against a blindness or vision-imparing effect.
51-60: A demonic face appears in your torso, which must be fed and speaks a lot (double your daily intake of rations, and take a -2 penalty on Stealth checks if you don’t gag it). You gain the following special power:
Mouth of Casting – Sherigras Racial Power
Daily Instant– Free – Arcane or Divine
Trigger: You cast an encounter or daily power that takes a standard action.
Effect: You cast the spell as a minor action instead of a standard action.
61-70: Animals will instinctively attack you on site, without exception, even if you have some sort of wild empathy. However, all aberrations, undead and outsiders of animal intelligence react to you as if you have monstrous empathy instead, granting you a +2 diplomacy, bluff, intimidation and nature bonus when interacting with or studying such exotic animals.
71-80: Blistery Black Boils cover your body from head to toe giving you a -2 reduction to your Charisma, but you are immune to disease and any exposure to a disease to which you fail a saving throw on makes you a carrier for that disease, instead.
81-90: You have perpetual stigmata, bleeding from spontaneous wounds, your eyes, and elsewhere constantly. You gain a -2 to stealth checks but gain a +2 save bonus to stop any ongoing bleed effect (standard damage or typed as bleed damage) in combat.
91-95: You have the head of an animal; you may choose the animal and gain a basic attack that does 1D8+Strength modifier damage associated with any propreties associated with the head (ram’s horns, crocodile bite, or such), as well as a natural animal empathy for those animals and the ability to communicate with them.
96-00: You appear to be outwardly normal, but at nighttime your skin disappears and you seem to bleed continually. You automatically save against any bleed effects (ongoing untyped damage) but are of such a monstrous appearance that social interactions are almost impossible.