Ages of Lingusia: The Monstrous Kindred 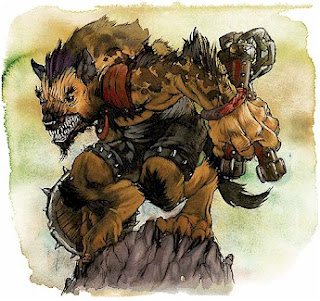 Gnolls
Gnolls dominate the vast region of the Northern Wilderness, but over successive generations many clans have migrated southward and invaded the shores of Hyrkania, much like any other barbarian presence. These periods of great migration are memorable periods of conflict, and the last great migration was about two centuries ago; scholars attribute such invasions by the gnolls to population pressure.
Gnolls in the Middle Kingdoms can be found in large migratory tribes and townships throughout northern Hyrkania and the southern deserts, raiding, working as mercenaries, or seeking out buried, ancient temples through which to try and commune with their dreadful demon gods.
Although most gnolls are only loosely allied to one another these days, there is a growing movement that seeks to reunite the old gnollish tribes in to a stronger movement, headed under the dominion of a chief demon lord. The gnolls have long been obsessed with the demon lords of the Abyss, and have a variety of myth tales about how they were created from demon seed in the era of the War of the Gods. Some believe that if they can once more fulfill this purpose, then the diaspora of tribes will find a new strength and the gnolls will at last have a new guiding purpose to lead them on to domination. Luckily, no single priest or warlord among the gnolls has become strong enough to influence their kind as a whole. Yet.

Gnoll Adventurers
Gnolls work as indicated in the MM. Gnolls are by and large an unfriendly fringe race, but if your campaign tends to avoid urban humanocentric regions in favor of the vast wilderlands inhabited by other monsters then gnolls may be especially suited to your particular games.

Living Constructs
Various fantasy realms have living constructs of different sorts. Such beings are very, very rare n Lingusia, should you decide to introduce one. They are usually the creation of specific alchemists and artificers, sometimes silver dwarves, who imbue a golem shell with the spirit of a newborn elemental. The process for creating a living construct is something only recently uncovered, and their practical use beyond efficient but expensive soldiers and guardians has yet to be explored. It is said that the fabled wizard Colimandras discovered the technique for creating living constructs on the Isle of Porondor, shortly before his ancient castle of fabulous gearworks was submerged in a volcanic deluge of lava.

Living Construct Adventurers
In 4E the warforged race may be used to represent various living constructs, but the uniqueness of each such being should be emphasized, as well as the unusual rarity of their kind. You should roll on the following charts to develop a unique look and feel. Roll once for body type then roll 1D3 times for body composition (or choose as desired): 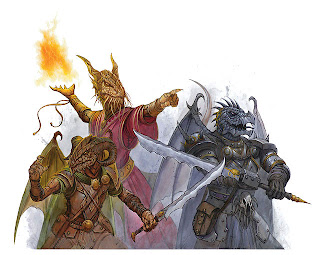 Marlack Draconians
The marlack draconians are among the most tolerable of the lesser draconian to interact with humanity. Once bred as shock troops in the many ancient wars of dragon kind, the Marlacks and their draconian kin have become increasingly rare, and most now survive in remote communities in regions far from human dominion. Marlacks and other draconian have difficulty breeding true, and for this reason it is exceptionally difficult to swell their numbers when needed, though it is also widely held that the magic of the dragon lords can alleviate this condition when necessary.
The largest marlack presence can be found in Galvonar, to the south, but there are communities of marlacks in the southern Isles of Karaktu, existing more often than not with the half-breed Yenetai weredrakes.
Average Height: 6'-7' tall
Average Weight: typically 300-450 lbs; the natural armor of draconians is heavy
Languages: Draconic and Tradespeak
Marlack Adventurers
Use the dragonborn race, but add the following feature:
Wings: Marlacks have dragon wings which give them lift. They can move somewhat faster, fly reasonably well, and are sufficiently talented that they gain no normal penalty when fighting while in flight (thus fighting as if they were on solid ground).  They gain a flying speed of 8 squares.
Dragonborn in Lingusia
True dragonborn, unlike marlacks, are not purebred from draconian stock, but are the rare byproduct of humanoid and dragon interaction over the last several thousand years. Dragonborn are true hybrids, with both mammalian and draconic traits, and can breed true. In times past dragonbron were much rarer, as they were the result of rare couplings between mortals with elder dragon lords transformed in to the forms of elves and humans. Such offspring were usually cared for by the dragon parent, and in time the dragonborn as a race were born. Like their draconian and marlack relatives dragonborn have often been used as envoys, soldiers, thralls and slaves by the dragon lords. As lesser hybrids dragonborn have also been looked upon with disdain by their pureblood relatives. When a dragon lord perishes, his entire herd of dragonborn thralls are put to death, unless they affect an escape or are lucky enough to be protected by a rival dragon lord who takes pity on them.
Dragonborn in the Middle Kingdoms dwell in one of three types of communities: those located in the region of a known dragon of power, acting as his servant; those who seek to escape the control of their dragon lords, perhaps because their patron dragon perished in a conflict, and those who have sought to establish their own way as a race and have been emancipated from the control of the dragon lords for multiple generations. Often these dragonborn seek to befriend humans or other kin in the region, as a way of gaining support against the risk of a dragon lord that mike seek to enslave them once more.
There are known dragonborn enclaves in the city of Niras’ien as well as Klydanth and Malas. Some dragonborn have been welcomed to the elvish communities of Sylvias. Rogue dragonborn who have adopted the barbaric way fo local humans can be found in the Cimeran and Hexerei Mountains. In the southern Isles of Karaktu rumors abound of the remnants of an ancient, powerful empire that was dominated by dragonborn now lost to time, as well as a unique society of dragonborn in the region of Yenetai, who are of mixed ashtarth and dragon blood. 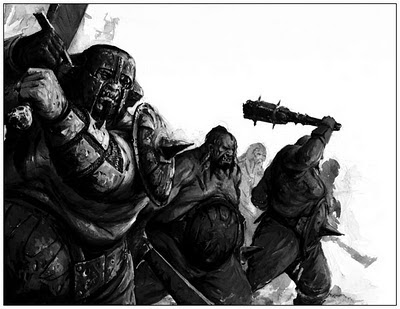 Ogres
The ogres, always brutish and barbaric, have remained a firm but minor presence in the Middle Kingdoms, usually dwelling in their own small tribes, or in conjunction with ogreish or giantish tribes. They are also found, semi-civlized, along the Inner Sea working as fishermen and hired mercenaries. All ogres live to an average of 60 years, assuming good clean living.
Ogres of Lingusia are big brutes, prone to moments of kidness punctuated by bouts of intense rage. They are moody and poetic, yet bloody and lighthearted during combat.
Though ogres are often associated with orcs and other chaos kin, this is more out of necessity than any sort of kinship. Ogres will in fact be happy to take up residence in or near human lands if they are certain peace can be kept, though this does rarely happen.
Ogres are obsessive in their religious faith, and tend to favor the worship one of only three deities, the only three they consider worth paying attention to. Ogres revere Hargameth for his strength in battle, Zingar for his patronage of the hunt, and Wolfon for his dominance over the beasts of the wilds. They disdain the worship of the demon gods or foul chaos gods such as Baragnagor or Dalroth, but some ogres that dwell among orcs and other chaos-kin are prone to worshipping these demon lords and chaos gods. Such ogres are treated as deviants in pure ogre communities.

Me Smash - Ogre Racial Basic Attack
You smash good. Real good.
At-Will – Standard – Martial, Melee or Unarmed
Target: one foe; Reach 1; Attack: Strength+2 vs. AC
Hit: 1D10+Strength damage.
Special: Your fists are melee weapons for purposes of any exploits, and may be used two-weapon style (two fists) for exploits such as Twin Strike.