Putting the Mythos into Azeroth 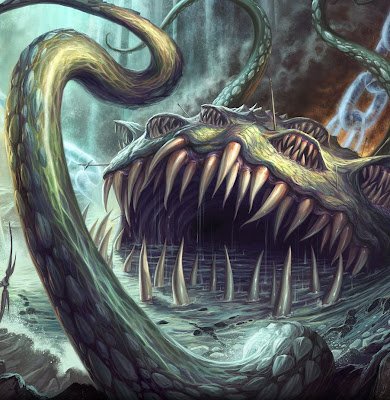 The Real Secret: Yogg-Saron is actually a Froghemoth with Delusions of Grandeur!

Once in a while I stumble on a lore related blog or article about the World of Warcraft. WoW is something I have more or less successfully quit, although it is the Key Source of Entertainment for my wife, so it remains an ever-present specter in my gaming environment. I logged hundreds of hours on WoW from all the way back in February 2005, so I remember when it took months and months to get to level 60 (unlike today, where you can slam out a level 85 in a few weeks if you're sufficiently dedicated).

With Cataclysm, as cool as many of its features and revisions were, I lost steam and couldn't continue. Part of my problem is that I simply lack the dedication necessary to see all the end-game content, instances, raids, gear and such. Another part is that I am too easily sucked away to enjoy more conventional computer games which cater specifically to me with elaborate story arcs and structures, fully-voiced acting and staggeringly good graphics. I love it when a game panders to me!

Anyway, this article is apparently written by one of the more famous lore gurus for WoW out there. It's a great, weird tinfoil hat review of the mythosesque elements of the bizarre and seemingly nonsensical mythology of the game, and a demonstration of how well it seems to correlate to the actual Lovecraftian Cthulhu Mythos on which much of it is clearly inspired. It's fun reading, and demonstrates pretty much how anything....even a world filled with butt-slapping gnomes, shamanistic space goats and drunken kung fu pandas...can seem cooler when you inject it with a hypodermic syringe full of Mythos Madness!

It's impressive because its fun to read a serious effort at this sort of interpretation; all of the mythosesque stuff I've seen in WoW before I had largely assumed to have been wedded in sometime around the Burning Crusade era by the developers as they cast about for story/plot/villain ideas and someone got inspired after an all-night bender while reading Lovecraft (which makes sense to me, because on the surface at least WoW's cosmology seems to be a startling hodge-podge of ideas, which meshes well with the fact that over the last two decades the game world's designers, writers and developers have changed up, a lot, going all the way back to "Orcs & Humans" on up to the present 8,000 Lb. Gorilla in the House).