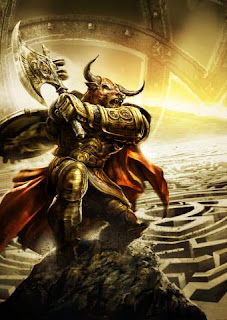 Mishrag Minotaurs
Minotaurs are valued for their religious dedication, muscle, and keen sense of architectural design. They have no central presence, appearing in small tribes and communities abroad on the surface and in the Lower Dark.
While most minotaur tribes remain subterranean, the benevolent Mishrag are among the few who venture forth to live amongst the surface dwellers. Most minotaurs remain in secluded enclaves beneath the earth, however, and often serve as slaves or mercenaries for more powerful neighbors.
Appearance and Personality: Lingusian Minotaurs are most bull like, with horns, faces, hooves, hair and tail drawn from bulls. Minotaurs are considered a Chosen Species, for it is said that at some time in the ancient past, the first minotaur was born of a human woman whom Wolfon took a liking to. Indeed, all minotaurs are male, and must seek out human women to perpetuate their species. Underworld enclaves are known to periodically raid remote human and elvish communities to find fresh stock for their breeding pens.
Relations: Many people, especially in Hyrkania where the long-lived servants of their faith have proselytized for centuries, regard Mishrag as a curiosity but in more remote lands, people fear and loathe the subterranean minotaur clans. Dwarves hate them with a passion, and some dwarven rangers specialize in minotaur slaying.
Religion: The Mishrag are the most well known of the tribes, dedicated to the peaceful worship of Amasyr, Ogron, and Seth. There are other subterranean tribes as well, seen rarely on the surface. Such tribes do not follow the worship of the Mishrag gods, and in fact revere Wolfon, the predatory god of the wild, and occasionally Baragnagor, the dark creator god of the chaoskin.
Languages: Minotaurs speak their own language, and one other language, usually Middle Tongue (to speak with their harem of human wives), elvish (ditto), or a neighboring underworld tongue. Ashtarth is a common language, as well, since minotaurs are often found as mercenaries for the dark elves.
Names: Minotaurs prefer simple names, and rarely attribute any meaning to them. They will refer to themselves and mention their tribe name, as well, but more as an honorific.
Tribe Names: Mishrag, Gotho, Belor, Himlar, Greos, Chabdam, Borakh.
Name Examples: Zigmond, Valos, Tobar, Shaban, Grosht. Ureck, Lovarg.
Adventurers: Mishrag are ready-made to be adventurers, wandering priests of the land. Other minotaurs might be driven to adventure due to exile, or perhaps a good minotaur seeks to escape his tribe’s malicious ways, and wants to win a human women through good deeds instead of capture and slavery. Mishrag minotaurs favor being clerics and monks but they almost always revere Graethos, though some old cults remain dedicated to the lost gods Ogron, and Seth. Mishrag are neither smarter nor more intelligent than other minotaurs, just enlightened. Other minotaurs prefer martial classes, for they are professional warriors, and descend from an ancient code of honorable conduct, even if they seem uncivilized. Minotaurs are angry, brooding souls, and they like to speak with violence.
Average Height: 8’ to 10’6”; minotaurs have shrunk over the centuries, and are not quite as large as they once were in ages past.
Average Weight: 400 to 550 lbs.
Languages: Minotaur and Middle Tongue, though some learn giantish, orcish and ashtarth.

Mishrag Minotaur Adventurers
The standard minotaur design rules for 4E apply, and any and all applicable racial feats and powers are available to Mishrag. Mishrag are most often found in the roles of cleric, paladin, invoker and sometimes avenger. Other minotaur clans are more commonly found as fighters, rangers and barbarians.