This is the last entry on the many gods of Lingusia! There are more, but these suffice for the purposes of the Ages of Lingusia series. 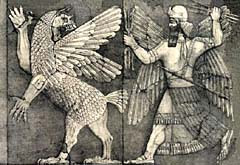 Profile: guardianship, civic duty, culture, veneration of the dead
Alignment: Lawful
In the great eastern city of Zued, a cult venerating the founding king of the city, Bashtron, has thrived as the civic religion of all kings since. Bashtron was revered in life as the first man to bring true civilization to the east, and as the stabilizing force which united the ancient tribes of Zued in to a powerful kingdom. His priesthood claims he was elevated to demiurge status by the gods, and as such, he has kept vigilant watch over the people of Zued and its environs ever since.
The priesthood is small but dedicated. Usually, last-born sons of lesser nobles and wealthy merchants are given to the temple at an early age. They are raised in the temple and taught the secrets of the order. The priests of Basthron maintain the Necropolis and catacombs of the city, as well as the Library and the Hall of Rulers, where more than two hundred great statues have been erected to venerate the great line of kings going back to Bashtron.
Appearance: Bashtron’s idols depict him as a great, bearded warrior riding a sphinx, his legendary mount and companion called Eygilias. The beast was said to have been a terror to the coast lands where Zued was founded, and one of the many tasks Bashtron had to complete was the taming of this wild beast.

Profile: winds, the sacred oasis, fire, life, called Lord of the Sacred Oasis
Alignment: neutrality
Favored Weapons: The scimitar, bow, and dagger.
The Ny’koddin Wastes are a land of desert genies, spirits, djinn, and other elemental beings feared by the rough nomads of the region. Jannos is their queen, a sorcerous demigod and mistress of spirits, as well as the entity which protects the nomads from such beings.
Jannos is seen as the counterbalance to the dreadful lord of the sand, Ravanos, and the merciless lord of the sun, Naq’ril. Jannos is the spirit of air and fire, the guardian of the precious resources of the land, and the spirit which takes pity on man.
A dedicated cult to Jannos can be found among the Ny’koddin nomads. These shamans are potent summoners and diviners.
Jannos appears as a whirlwind of desert sand and wind, with a vaguely humanoid appearance, which can change in to a monstrous dragon of sand when enraged.

The Reaver
Profile: The Death Dealer, Reaver of the Desert Sands, Old God of Kadantania, Patron of Hotepsala
Alignment: chaos
Ravanos, the devil of the desert, reaver of the winds, is a terrible demiurge who dominates the lands of the Ny’Koddin wastes and Hotepsala. Within the desert lands he is feared and his haggard cult serves to appease and control him. Within the lands of the Hotepsalans, a controlling priesthood sacrifices to him regularly in exchange for power and the control of their people.
Ravanos is believed to have been a principle god of the old Kadantanians, and evidence for such can be found in their ancient ruins. Ravanos may have been driven out by the god Amech, and forced to exist on the fringes of his native territory, with no choice but to bond to the eastern pantheon. Many suspect that Ravanos would dearly love to return to being worshipped in Amech, and that the Hadrosian expansion is part of just such an effort.
Ravanos appears as a demonic dust storm with the guise of a hideous entity swirling within. Ravanos seems to be as much a elemental being as a demiurge, and many travelers in the Ny’Koddin Wastes can speak of actually seeing him appear.
Posted by Doctor Futurity at 6:00 AM