Dappled Horses of Pech-Merle may have been Real 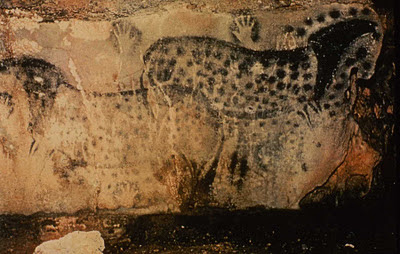 The lead-in is here over at PNAS, but it's an interesting story, as the legendary Dappled Horses depicted in the 25,000 year old cave art of Pech-Merle may have been representational art rather than early creative or imaginary works. The phenotype for the leopard spot dappled-coat of certain modern horses has now been found in several pleisotecene and copper-age remains, which strongly suggests that this phenotype is not a modern variation but has a more venerable history.

This makes sense to me; the beauty of early cave art exemplifies developmental skills in keen observers who were relaying what they saw in their environment, that was likely important or noteworthy to them. I find it more reasonable to imagine these early artists as observers and recorders of their environment, given their choice of subject matter. The abstraction of art in later ages strike me as something that may necessarily emerge over time, but not necessarily with the level of exoticism demonstrated in these paintings. It seems reasonable that abstraction necessarily follows interpretation of the observable environment, and the early cave art I think reflects this process or evolution in art and interpretation. Interesting stuff, either way.

Posted by Doctor Futurity at 9:45 AM