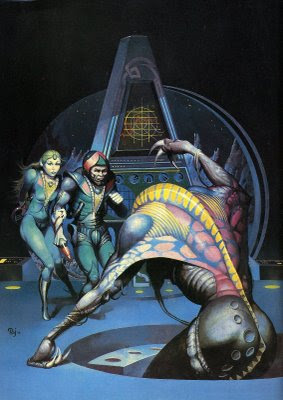 
A 7-9 foot tall humanoid, with rubbery grey-blue skin, alien musculature, and huge saucer like eyes on an ovoid head. Where a mouth should be is a mass of dangling, writhing tentacles probing for food and covering a proboscis-like mouth. Each muscled arm ends in three powerful digits which flex to project enormous bio metallic claws.

The Praektorian species is one of the earliest man encountered. Due to the fact that the Praektor were harvested over a period of millennia by the Harbinger species, Praektorians were spread throughout the Orion Arm of the galaxy and perhaps beyond. They were cultivated as shock troops and ground soldiers by the Harbingers, and often genetically enhanced and altered. It is not even clear if their original point of origin still exists, of was destroyed by the harbingers. There are no present unified Praektor civilizations, but rather a loose cultural grouping over many domains. Only a few territories are ruled by this species.

Praektorians are large bipeds, averaging 8 to 9 feet in height, and bulky, though their surprisingly light for their size. They are still amphibious, and hail from a dense, watery world. Many Praektorians were genetically modified to no longer require immersion in water to avoid skin damage, but some pure-strain Praektorians still require immersion at least once a day.

Praektorians are gray to black in skin color, and have large, oval heads ending in a may hidden by draping tentacles. They have multi-colored tattoo-like imagery on their foreheads, serving to signify the males and females. These symbols are always unique among groups, and appear to have hereditary ties.

Praektorian eyes are large, saucer-like, and dominate much of the head. They are photoreceptors, big plates that do not swivel, and are positioned so that the Praektorian has 360 degrees of vision. They do not focus on specific movements or details, however, and have a complicated visual center of their brain which draws attention to desired details through a singling-out effect, in which they learn to ignore and focus, rather than deal with a constant surrounding image.

Praektorians are well armed, equipped with a three fingered hand with pronounced retractable natural blades. These blades can be broken by stronger materials, but are bony and razor-sharp. When pushing through the hollow, bony tubes of their fingers, the blades force their hands to go rigid.

Praektorians are equipped with exoskeletons, covered by epidermal tissue, with all organs and important body functions safely contained within. This provides them with a natural armor, and a better than average resistance to damage.

Praektorians have webbed feet and sometimes webbed fingers. They also have strong webbing running between their arms and rib cages. They can swim and dive to incredible depths, some as deep as a quarter of a mile, resisting great pressure at such depths. They can hold their breath for 30 minutes or more, and the amphibious throwbacks can process oxygen from the water they are diving in.

Praektorians get a number of special advantages, and may optionally choose to be amphibious as well.

Tough: Praektorians are large and hardy, and get a +3 Str and +2 End modifier. Praektorians tend not to value traditional educational systems, however, preferring the school of hard knocks and so get a -3 modifier to Education.

Natural Weapon - Retractable Claws: These do STR X1 damage. Praektorian claws can be broken, but regenerate in 1D6 weeks. They are strong carbon-metal claws and can cut steel.

360 Degree Vision: They get a +1 modifier to vision-based checks as well as initiative. However, they are susceptible to sudden changes in light; if exposed to sudden, intense light they will be at a –2 until they make an Endurance check.

Optional: Amphibious subspecies. Some Praektorians still retain their amphibious heritage. They get the Aquatic trait, but do not suffer a dexterity penalty. They do require immersion in water periodically to avoid taking Endurance damage (1 point per turn if out of water for more than 24 hours). Should an aquatic praetorian decide to undergo transgenic modification, he may remove his water restriction through gene therapy and enhancements, at a cost of 100,000 credits and 1D6 months therapy and recovery from the operation.

Career Paths: Praektorians are known for their military prowess. They may belong to any military career and get a +2 modifier for enlistment in to a military branch for their first career term only.