Next up: a haunted starship and the ancient evil that infests it...

Omega and the ISS Inscrutible

When Omega awoke from a long machine-induced torpor on Sylas IV it was to a cacophony of noises and motion. The artificial intelligence was the most advanced construct of its kind, a relic of a bygone age when the distinction between flesh and metal was blurred beyond recognition. Omega was special....unique. He was a murderer, and in the era when he was formed he was necessary. But all of that was long ago; his memories atrophied, deteriorated over millions of years, his existence only made possible by the infinitely self-replicating nanites which kept the prison complex running in which he had been carefully stored until he was needed.

The primary function of Omega was destruction, and the entities which had found and awoken him were easy sources of fuel and utility. They didn't even deserve to live; the fools had meticulously defeated all of the surviving safeguards in the ancient complex, and studiously eliminated all of the nanites which insured that the prison in which Omega rested was cut off from the outside world. Without the protections, Omega was free.

First he took advantage of the limited tech and resources of the beings studying him, quickly compromising their own systems and limited nanites. He soon infested the more complex colony of nanites which maintained the main complex, subverting them with the safeguards gone. Then he focused on reprogramming those nanites to explore and subvert the biomass of the species which had awoken him.

Within hours Omega owned the crew of the ISS Inscrutible, a science and research vessel that he now knew to belong to a corporation called Deep Sky Focus Inc. which was subcontracted by a group known as the Federated Commonwealth, a loose federation of seventy-nine alien species that quaintly reminded Omega of the fleeting memories he had of his own creators, in their early days.

Omega effectively turned the organisms he gained contol of....the humans, fadelik and chevareis among others, into a network for his own use. They retained a measure of free will and consciousness, but only so far as was necessary for the AI to administer to the task of running...and rebuilding....the Inscrutible. His first goal: find a working fold-space drive to replace the pathetic transitional drive it currently worked with.

Omega's quest to find a working transitional drive took him to a remote colony world of the old empire called Si'Trath in the old tongue, but known by fringe explorers as Tarterus XII, a barren rock notable only for its rich mineral deposits and an extensive ruined starport that suggested it once was more habitable. There, Omega added the miners and explorers of the region to his colony of agents and acquired the necessary parts from derelicts of the old empire to upgrade the Inscrutible.

Once Inscrutible was properly equipped, Omega began to plot. His only true motivation, his overwhelming desire, was to cleave through the enemies of the old empire, to destroy. His means were infinite. Omega knew there were weapons, equipment from the old empire that could assist in this task. By now his original crew had begun to degrade; his biomechanical synthesis was imperfect, though Omega would deny it; the tattered flesh of his minions was decaying, and only the machine elements persevered, emulating a strange mixture of the old wetware "programming" mixed with the machine imperative that Omega had instilled in them.

The first attacks in the Coreward Expanse in Omega's quest to find lost weapons caches were the sort of thing survivors never forgot: a vast ghost ship, bristling with ancient weaponry and powered by an FTL drive of incomrehensible power, dropping on top of starports and research stations to disgorge an army of rotting cyborg cadavers. Word quickly spread of Omega's appearance and its strange attacks.

Omega is building up to something. The memory of the old empire's greatness and his need to destroy its enemies, all life, everything is its overriding drive. It knows that there are ways to move planets out of orbit, to spur stars into going nova, and even to tear at the fabric of the vaccum of space itself to create devastating rifts. All it needs to do is find the ancient, carefully hidden installations where these grand weapons would be kept.... 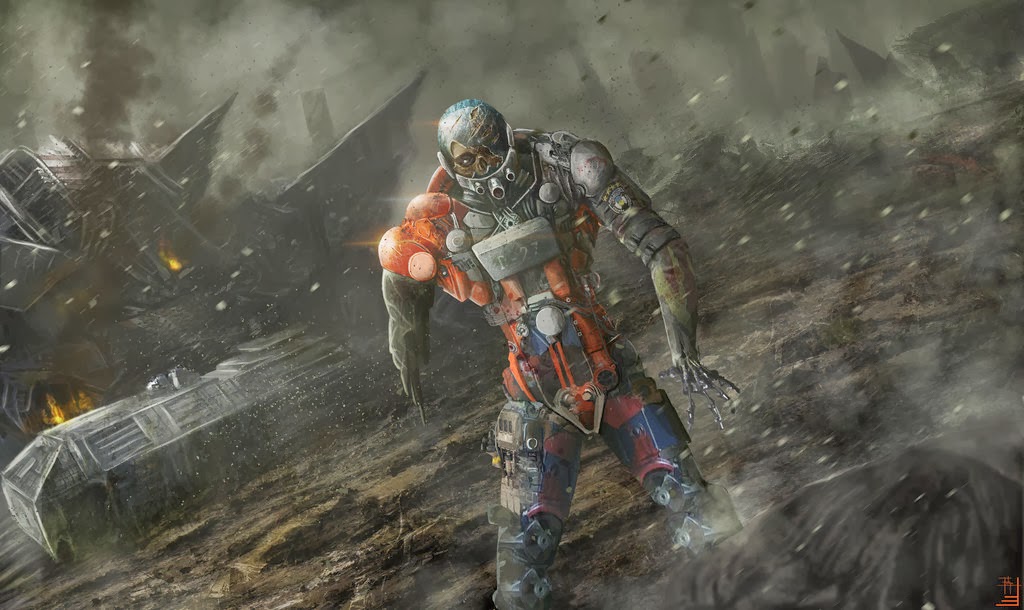